The global amines market size was estimated at USD 14.4 billion in 2016. The increasing use of the product and its derivatives for the manufacture of numerous personal care products is expected to have a significant impact on market growth over the forecast period.

The rapid growth of the personal care industry, on account of increasing consumer expenditure on luxury and lifestyle goods at a global level, is expected to act as the key market driver over the forecast years. In addition, the increasing product penetration in applications such as crop protection chemicals, water, and gas treatment is likely to propel product demand over the next few years. 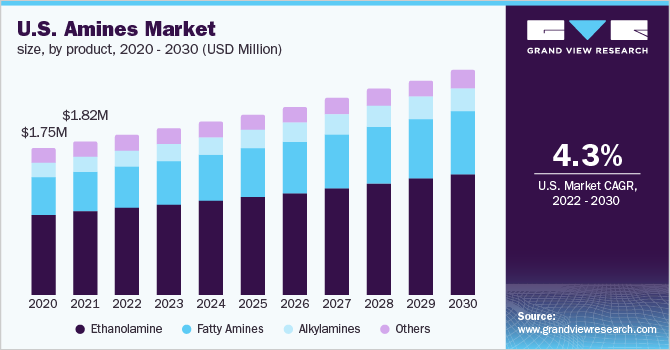 Amines are derived from ammonia, which in turn is derived from natural gas, especially methane. A broad range of amines are available in the market, the products are a result of several chemical reactions between amines, alcohols, and acids. The companies are involved in the manufacture of raw materials to the production of end products. Further, small and medium-sized raw material suppliers are also present, which augments the intensity of competition in the industry.

Ethanolamines account for the largest product category in terms of both volume and revenue. This segment includes a variety of amines derived as a result of different chemical reactions between primary amines and alcohol. The three key sub-segments include MEA, DEA, and TEA, the product is largely used for the manufacture of detergents, chelating agents, emulsifiers, and chemical intermediates, with widespread applications in end-use verticals such as plastic, agriculture, construction, chemicals, and energy.

The fatty amines and alkylamine segments are expected to witness significant growth over the next eight years, on account of the increasing product demand for the production of froth flotation agents, corrosion inhibitors, anti-cackling agents, emulsifiers, and additives. However, the relatively higher prices of the product and its derivative is likely to hamper market demand.

The extensive building and construction activities in key economies such as China, Mexico, India, U.S., and Germany over the past few years have resulted in the rapid growth of the construction industry, which, in turn, is expected to have a positive impact on the market demand for amines over the forecast period.

The crop protection application segment accounted for a significant amines market share in 2016, accounting for over 34% in terms of both volume and revenue. The application segment is likely to witness high growth during the forecast period, the growth can be attributed to the changing dynamics of the agricultural sector across the globe. The modernization of agricultural practices is expected to drive the demand for crop protection chemicals, which will result in higher demand for amines.

The personal care segment is projected to grow at a CAGR of nearly 5% over the forecast period, in terms of volume. The segment caters to products for skincare, haircare, personal hygiene, oral care, and cosmetics, which account for a significant share in the FMCG industry. The rapidly growing FMCG industry in emerging economies of Asia Pacific is expected to drive the application segment, which in turn is likely to drive the product demand in personal care applications. 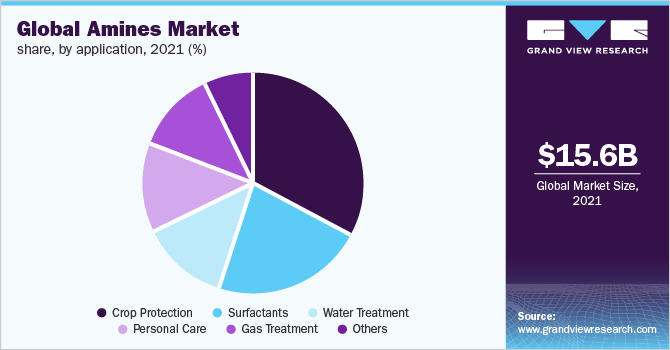 Amines are increasingly being used for the manufacture of detergents and cleaners for domestic, commercial, and industrial uses. Concentrated detergents and chelating agents are used for industrial cleaning applications. The rapid industrial growth across several emerging economies of the globe is expected to positively impact the product demand during the forecast period.

Water treatment is projected to witness high growth, to the tune of over 8.5% during the forecast years. The increasing consumer awareness about access to safe drinking water will benefit the product demand during the next few years. Growing concerns regarding the circulation of contaminated water, the supply of water in rural areas, and the growing incidence of waterborne diseases among children below the age of five are likely to act as major drivers for the use of water treating amines.

Asia Pacific accounted for the largest share in terms of both volume and revenue, on account of the fast-paced growth of key application industries in the region. The rapidly-growing industries such as manufacturing, energy, construction, and FMCG in emerging countries such as China, India, and South Korea is expected to drive product use over the forecast period.

The industry in China recorded volumes of over 1,300.0 kilo tons in 2016 and is expected to witness a CAGR of nearly 4.5% during the forecast years. The high growth is a result of significant growth in end-use industries. Further, the presence of key chemical manufacturers in the country with extensive product portfolios is expected to drive the product demand in the near future.

The industry in Europe accounts for a significant share, with the presence of key market players including BASF SE in the region, with large production capacities. Germany accounted for a significant share in terms of both volume and revenue, mainly on account of a large number of market participants in the country.

The global amines industry is characterized by intense competition, mainly on account of the presence of major players across North America, Europe, and Asia Pacific. Market participants include players such as PPG Industries, Eastman Chemicals, BASF SE, Quaker Chemicals, Dow Chemicals, and Sinopec, among others.

The abovementioned players operate at very high production capacities with a gamut range of products and well-established distribution networks. In addition, the industry players continuously invest in research & development for the purpose of expanding the application scope in major end-use verticals. Product distribution channel plays a crucial role in the industry, the companies in the domain involved in the direct and indirect distribution of their products. The companies collaborate with third-party distributors to cater to local demand.

This report forecasts volume and revenue growth at regional & country levels and provides an analysis of the industry trends in each of the sub-segments from 2014 to 2025. For the purpose of this study, Grand View Research has segmented the global amines market on the basis of product, application, and region: