The global atherectomy devices market size was valued at USD 557.7 million in 2018 and is projected to grow with a CAGR of 7.0% over the forecast period. The rising prevalence of target diseases is the key driver of the market. More than 250 million people worldwide suffer from peripheral artery disease (PAD), with high prevalence in the geriatric population. The prevalence of PAD increased by 24% between 2000 to 2010 and continues to grow at an exponential rate. Both high- and low-income countries have this prevalence. Low-income countries witnessed a growth of 29%, while high-income countries witnessed a growth of 13% in the last decade. 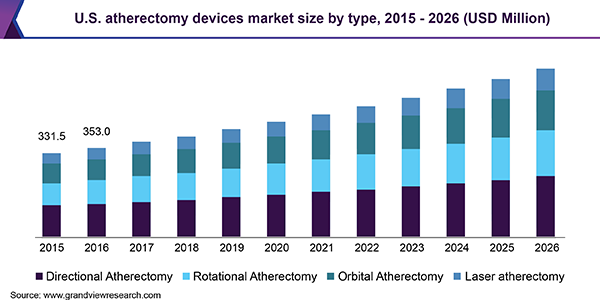 The industry is also witnessing dynamic mergers and acquisition activities. For instance, in August 2017, Koninklijke Philips N.V. acquired Spectranetics, a U.S. based vascular intervention, and lead management solutions company. The acquisition helped Philips to expand and strengthen its image-guided therapy business. Spectranetics’ devices and Philips interventional imaging system allowed the company to make a strategic expansion of their existing devices, software, and services.

Directional, rotational, orbital, and laser atherectomy devices are the key types of segments analyzed in this study. The directional atherectomy devices dominated the market in 2018 due to its early inception and penetration in the market. In addition, it has advantages such as availability in various sizes and ability of plaque debulking

Various clinical trials to prove the efficacy of the device also contributes to the high demand. Trials such as DEFINITIVE LE (determination of the effectiveness of the SilverHawk peripheral plaque excision system for infrainguinal vessels/lower extremities treatment) and EASE (Endovascular Atherectomy Safety and Effectiveness) displayed success rate of more than 90% assuring the effectiveness of the concerned devices.

Rotational atherectomy devices also have a substantial share in the market. Almost 96% of cases do not need clinical assistance up to 9 months after the procedure. This is anticipated to provide an advantage to rotational devices and grow its market share over the next 8 years.

North America dominated by market share in 2016. Suitable reimbursement scenario and a high number of FDA approved devices are the key reasons for this dominance. For instance, in April 2019, Avinger, Inc. received 510(k) clearance from the FDA for Pantheris SV (Small Vessel) image-guided atherectomy system. A product line extension of its Lumivascular image-guided atherectomy platform is expected in the Pantheris market by 50% thereby increasing its share in the global atherectomy devices market.

A strong preference for minimally invasive procedures is observed in the region. Since 2006, the rate of bypass surgeries has decreased by 43%, whereas the rate of endovascular procedures has increased by manifold times. This also has reflected in the rate of amputations, which fell by almost 28% over the past few years. 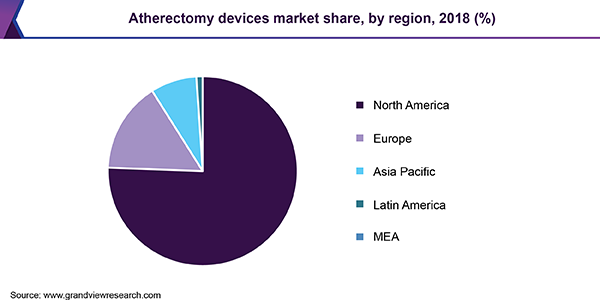 Asia Pacific is anticipated to observe the fastest growth over the coming 8 years. Factors like socioeconomic changes, unhealthy diet, smoking, consumption of alcohol, and an aging population have resulted in increase in target diseases. Around 97 million people were affected by PAD in 2015 in the region. This number is estimated to reach 111 million by 2019. This indicates the huge scope for market expansion in the region.

The healthcare industry is witnessing dynamic activities in the form of new product approvals and increasing commercialization in various geographical locations. For instance, in January 2017, Medtronic plc received CE mark approval for its HawkOne directional atherectomy system. The new HawkOne 6 French (6F) system for treating patients with PAD provides easy to use treatment option with a single device.

This report forecasts revenue growth and provides an analysis on the latest trends in each of the sub-segments from 2015 to 2026. For this study, Grand View Research has segmented the global Atherectomy Devices market based on type and region: