The Australia legal cannabis market size was valued at USD 51.8 million in 2021 and is expected to expand at a compound annual growth rate (CAGR) of 30.1% from 2022 to 2030. The growth of the market is propelled by the increasing public knowledge of the health benefits of cannabis intake. The growing legalization of marijuana, mostly for medical purposes, is also expected to contribute to the growth of the market in Australia. Some other primary factors fuelling the growth include the expanding legalization, the growing patient population, additional government support, and the presence of local and foreign players in the country. 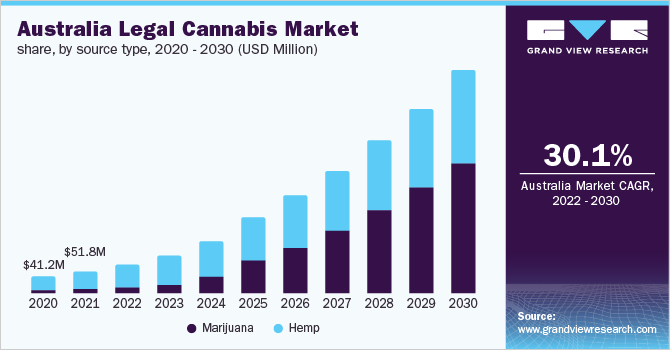 The increase in medical marijuana output as a result of increasing demands in the pharmaceutical sector is boosting the overall growth of the market. Increased opioid toxicity is expected to increase demand for medicinal hemp and marijuana, necessitating greater cultivation to meet rising consumer demand. According to data issued by the Therapeutic Goods Administration in June 2020, there are about 14 emergency hospital admissions and 150 hospitalizations per day in Australia, with three people dying as a result of opioid consumption.

In Australia, the regulatory framework for medicinal hemp and marijuana is constantly evolving and remains closely regulated. In July 2020, 41.0% of citizens supported legalization, according to the Australian Institute of Health and Welfare. The first city to legitimize personal marijuana growing and possession for recreational purposes in September 2019 was the country’s capital Canberra. On a federal level, however, recreational marijuana possession remains illegal across the country. New cannabis legislation was enacted by the government, allowing the Australian Capital Territory (ACT) to acquire and cultivate marijuana for recreational use.

When contrasted to other countries in the Asia Pacific region, Australia has been a strong supporter of cannabis legalization. For example, when cannabis was legitimized in Canberra, residents over the age of 18 were allowed to possess up to 50 grams of dried marijuana and grow two marijuana plants. Several companies are publicly traded on the Australian Stock Exchange (ASX), have applied for cultivation licenses, and are being purchased or funded by major players.

The rules for growing hemp and marijuana are ambiguous, forcing governments to acquire hemp and marijuana from countries like Australia. These laws result in high import prices, which have an impact on retail pricing. This is intended to lead customers to seek hemp and marijuana through illegal routes, where it will be offered at significantly lower prices. Even if the drug has been approved for medical use, this is expected to stifle the cultivation business in these countries.

Increased use of marijuana, mostly for medical purposes, is boosting total market growth as customers migrate from traditional treatment methods to cannabis-based treatment. Furthermore, the COVID-19 pandemic severely impacted the country’s legal cannabis business, as the statewide lockdowns disrupted product manufacturing distribution due to the imposed import/export restrictions, resulting in reduced overall profits. Cann Group Limited, for example, saw a 72.5 percent drop in revenue in FY2020 compared to FY2019, owing to a government-imposed lockdown and distribution network interruptions caused by the COVID-19 epidemic.

The hemp segment dominated the market with the highest revenue share of 83.2% in 2021. This is related to rising rates of ailments such as epilepsy and other sleep disorders, as well as increased usage of hemp-based goods, such as hemp CBD and supplements, for their many health advantages. Epilepsy was diagnosed in 250,000 people in the country, according to Epilepsy Action Australia.

Moreover, increasing use of these products for various industrial purposes, as well as an increase in demand for green buildings as a result of environmental degradation, are expected to propel the market for hemp-based construction materials over the projected period.

The marijuana segment is expected to register the fastest growth during the forecast period. As a result of medical cannabis legalization and prohibition in the country, people are turning to legitimately obtaining marijuana products for medical use. This is likely to result in a significant decline in the illicit market. Cannabis legalization is expected to boost the government’s revenue through taxation and is projected to boost market growth.

In April 2018, an article was published by Guardian News and Media Limited, that the legalization of marijuana for recreational use in Australia is expected to raise USD 3.6 billion in the Australian economy over four years beginning in July 2019, based on a 25% excise tax. Furthermore, due to the low cost and easy availability of marijuana across the country, a movement in customer choice for cannabis from medical to recreational use is expected to increase.

In 2021, CBD held the largest revenue share of 66.5% of the Australia legal cannabis market. This comes with the legalization of low-dose CBD products by the Therapeutic Goods Administration (TGA), even though these products have been legalized, they have not been approved by the Australian Register of Therapeutic Goods (ARTG). CBD has been approved for various conditions like treating arthritic pain, epileptic seizures, and nausea caused by chemotherapy. In Australia, only one regulatory grade product is approved for use-Epidyolex used for the treatment of severe childhood epilepsy.

The other category in the derivatives segment was the fastest-growing sub-segment. This is due to the growing popularity of products containing minor cannabinoids, terpenes, flavonoids, etc., in the region. Usually, plant-derived products contain fewer amounts of trace or minor cannabinoids like CBG, CBC, THCV, THCA, and CBDA along with flavonoids and terpenoids. iX Biopharma, an Australian company has formulated Xativa which contains CBD along with 30+ derivatives including terpenes, there are several other companies manufacturing these products which have been a primary driving factor for the growth of the legal cannabis market in Australia.

The industrial application segment dominated the country’s legal cannabis market and accounted for the largest revenue share of 81% in 2021. Construction, personal care, automotive, food and beverage, and textile industries are all seeing an increase in demand for hemp fibers and oil, which is helping the category grow. Varnishes, oil paints, fuel, printing inks, solvents, putty, chain-saw lubricants, and coatings are all projected to see increased demand. Cannabis is rapidly being used in non-textile applications to reduce pollution, deforestation, and landfill waste. 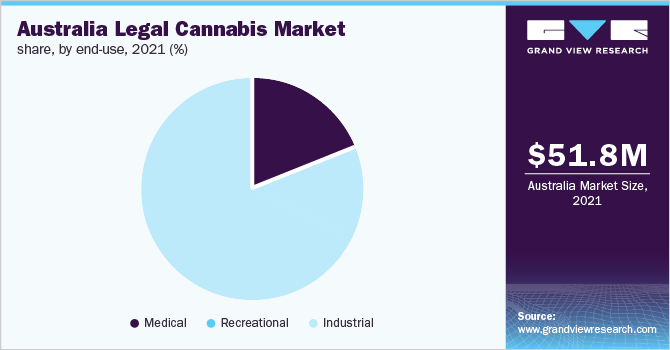 The recreational application segment is expected to grow at the fastest growth rate during the projected period. The growing awareness of cannabis and the increasing legalization of cannabis cultivation and usage for recreational purposes are the primary factors contributing to the growth of this segment of the market. Furthermore, the widespread adoption of cannabis for health benefits coupled with favorable support from the Australian government is driving the growth of the segment.

Numerous local and international firms dominate the legal cannabis market in Australia. Local businesses are concentrating their efforts on growing their customer base, exports in the country, and geographic presence.  International players, on the other hand, are financing local businesses to improve their market position. On the 10th March 2021, Cann Group Limited announced today that it had finalized the purchase of Harvest One Cannabis Inc's Satipharm business. Some prominent players in the Australia legal cannabis market include:

This report forecasts revenue growth at the country level and provides an analysis of the latest industry trends in each of the sub-segments from 2016 to 2030. For this study, Grand View Research, Inc. has segmented the Australia legal cannabis market report based on source, derivatives, and end-use:

How big is the Australia legal cannabis market?

b. Hemp dominated the Australia legal cannabis market with a share of 83.2% in 2021. This is attributable to the increased number of patients consuming hemp-based products such as hemp CBD and supplements for various health benefits.

Who are the key players in the Australia legal cannabis market?

What are the factors driving the Australia legal cannabis market?

b. Key factors that are driving the Australia legal cannabis market growth include the increasing legalization of marijuana for adult and medical use and the high consumption rate in the country.