The global caramel ingredients market size was valued at USD 2.5 billion in 2018 and is expected to register a CAGR of 7.2% from 2019 to 2025. Caramel is a confectionery product used in foods and beverages for flavoring, filling, coating, coloring, and topping. The market is mainly driven by a booming convenience food industry, a rise in disposable income of consumers, and widespread urbanization, especially in developing economies. 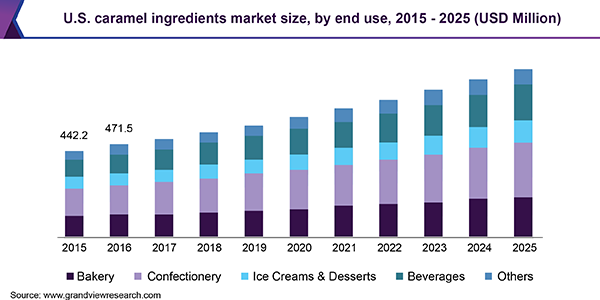 Caramel ingredients have been gaining global acceptance due to rising consumer indulgence in bakery and confectionery products. A prominent application of this ingredient is also noted in the beverages segment, in different forms such as syrups and powders in teas, lemonades, fruit drinks, colas, and beer, to name a few. Recognizing the numerous applications of the ingredient, companies, both large and small, have been looking to make the most of ongoing consumer and food trends to stay ahead of the competition. Product innovation, attractive packaging solutions, investments in marketing and promotions, collaborations with product manufacturers in other application segments, and capacity expansion in newer markets are some of the growth strategies being adopted by players in the market.

While the market already has an established presence in developed countries across North America and Europe, its scope for growth in developing countries in Asia Pacific and South and Central America is noteworthy. Untapped potential in countries like India, China, and Brazil, particularly in the bakery and confectionery segments, is driven by the strong influence of Western-style dietary habits. This, coupled with rising disposable income and evolving lifestyles, has resulted in a diversified palette, thereby offering players in this market a major opportunity for expansion. Catering to these smaller yet more lucrative markets by taking into consideration the preferences, purchasing habits, and tastes of the consumers can prove to be immensely profitable for companies.

The market has been facing a threat from the introduction of caramel alternatives in recent years. rising concerns over the harmful effects of caramel ingredients as a coloring agent have been a major drawback the market has faced in the past decade. this has been further aggravated by an ongoing change in overall eating habits, with consumers choosing healthier, low-carb, low-sugar foods. This is proving to be a roadblock for many manufacturers. Moreover, rising prices of caramel ingredients and other raw materials will also act as a restraint to market growth.

By form, caramel ingredients can be categorized into liquid, solid, and granular. The market is dominated by liquid ingredients owing to extensive application in the beverages industry, primarily sodas, and colas. The ingredient is also widely used in the manufacturing of various alcoholic beverages such as beer, whiskey, scotch, and dark rum. The salted caramel porter is one of the most popular beers during fall and year after year, companies introduce innovative and unique twists to the original recipe to give consumers something new. For instance, Arcadia Brewing Company teamed up with Biggby Coffee in December 2018 to introduce the Salted Caramel Coffee Porter. This limited edition variation of one of the favorite seasonal beers was made available at select retail locations in the U.S.

The granulated or powdered form of the ingredient is expected to exhibit the fastest growth over the forecast period as it has a better shelf life as compared to other forms. It is extensively used in bakery and packaged food products as a topping and flavoring ingredient.

On the basis of end-use, the caramel ingredients market has been segmented into confectionery, bakery, ice cream and desserts, beverages, and others. The confectionery segment accounted for the largest revenue share in 2018 and will retain its lead throughout the forecast period. Caramel has been a traditional ingredient in numerous confectionery products and will always be on-trend. Realizing the importance and potential of this versatile ingredient, confectionery makers, both large and small, have been coming up with new and interesting combinations. For instance, Quality Street, one of the most well-known assortments of chocolates, toffees, and sweets produced by Nestlé, will be debuting a caramel brownie chocolate in its 2019 Christmas selection. Similarly, Dove, an American chocolate brand sold as ‘Galaxy’ in other countries, will be introducing a fall-inspired variant White Chocolate Caramel Apple in the autumn of 2019.

Based on the application, the market has been segmented into coloring, flavoring, topping, and others. Coloring led the market with a share of more than 35.0% in 2018. Using caramel ingredients as coloring agents in various foods and beverages has been an old practice, with consumers placing a lot of importance on color and appearance over flavor when it comes to choosing what to eat or drink. Soft drinks, baked goods, sauces, and alcohol are some of the most common items that use caramel as a coloring agent. However, studies over the past decade have raised concerns over certain types of caramel coloring, which show that chemicals used in these colors may be carcinogenic. These findings have adversely influenced consumer behavior and decisions and this could act as a restraint to segment growth. 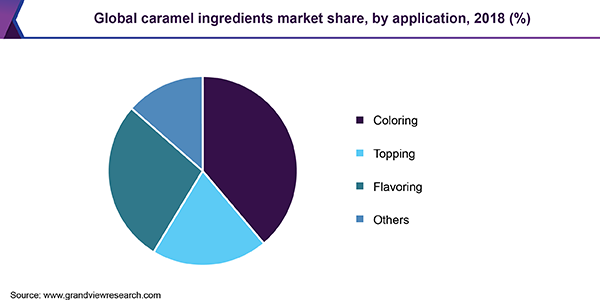 The topping segment is predicted to exhibit the strongest growth over the forecast period, registering an 8.1% CAGR from 2019 to 2025. Caramel toppings are immensely popular in several frozen desserts, baked goods, chocolates, shakes, and smoothies and this ingredient is one of the most common additions to fall menu items in North America. For instance, Dairy Queen released two new Blizzards to its 2019 fall menu, one of them being the Heath Caramel Brownie Blizzard. Available at Dairy Queen outlets across the U.S., this frozen vanilla treat includes brownie pieces, crunchy Hershey’s Heath Pieces, and a rich caramel topping.

North America was the leading market in 2018, closely followed by Europe. Together, the two accounted for a little over half the market that year, mainly propelled by the presence of established global players. The greater popularity of caramel as an ingredient across application categories such as packaged and frozen foods, desserts, bakery items, and confectionery has continued to contribute significantly to the growth of these regional markets. Companies have made innovation and seasonal favorites a key growth strategy and this will keep North America and Europe at the top of their game throughout the forecast period. For instance, Mars Wrigley International Travel Retail will be launching its limited-edition M&M’s and Twix selections at the 2019 TFWA World Exhibition & Conference. The Twix Salted Caramel and M&M’s Crunchy Caramel aim to give consumers something new, unexpected, and fun to improve their travel experience.

Asia Pacific is likely to emerge as the fastest-growing regional market for caramel ingredients, registering a 7.7% CAGR over the forecast period. Numerous countries in the region, primarily India, China, Indonesia, Malaysia, Korea, and Thailand are major revenue pockets for new as well as established players. Rapid urbanization, growing disposable income of the consumers, improving logistics, and growth of the food and beverage industry in these developing countries have been attracting major global manufacturers to expand in the region and capitalize on the lucrative opportunities here.

Key players operating in the market include Cargill, Inc.; Nestlé S.A.; Mars Inc.; Kerry Group; Ferrero SpA; Sensient Technologies Corporation; Goetze’s Candy Company, Inc.; Frito-Lay; DDW The Color House; Sethness-Roquette Caramel Color; Bakels Worldwide; Alvin Caramel Colours; and Metarom. Caramel is an extremely versatile ingredient and is being adopted by an increasing number of confectioners in their products. For instance, Mars Corporation announced a new variety of Milky Way to be introduced in the markets in January 2020. The Milky Way Salted Caramel bar is a twist on the original candy bar. Other products by the company, which has significantly focused on caramel ingredients, include Milky Way Caramel Apple and Milky Way Simply Caramel.

This report forecasts revenue growth at global, regional, and country levels and provides an analysis of the latest industry trends in each of the sub-segments from 2015 to 2025. For the purpose of this study, Grand View Research has segmented the global caramel ingredients market report on the basis of form, application, end-use, and region:

How big is the caramel ingredients market?

What is the caramel ingredients market growth?

Which segment accounted for the largest caramel ingredients market share?

b. North America dominated the caramel ingredients market with a share of 28.7% in 2019. This is attributed to greater popularity of caramel as an ingredient across application categories such as packaged and frozen foods, desserts, bakery items, and confectionery.

Who are the key players in caramel ingredients market?

What are the factors driving the caramel ingredients market?

b. Key factors that are driving the market growth include rising consumer indulgence in bakery and confectionery products and prominent application of this ingredient is also noted in the beverages segment, in different forms such as syrups and powders in teas, lemonades, fruit drinks, colas, and beer.