The global dodecanedioic acid market demand was pegged at 69.6 kilo tons in 2018 and is expected to expand at a CAGR of 5.5% over the forecast period. Demand for dodecanedioic acid (DDDA) can be attributed to extensive usage in the production of paints, engineering plastics, corrosion inhibitors, coatings, adhesives, lubricants, and surfactants. Moreover, the presence of a robust manufacturing base in emerging economies is propelling the market. 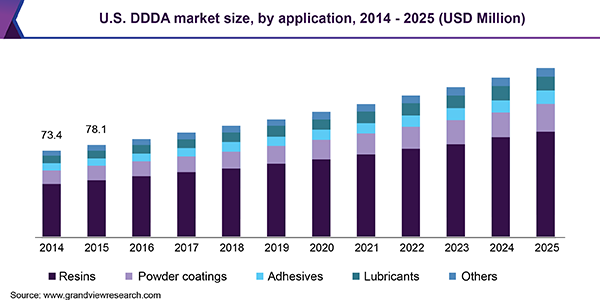 Rapid industrialization in emerging economies is anticipated to augment the demand for adhesives, lubricants, and nylons. The rise in demand for paints and coatings, especially in powder coatings, is expected to stimulate demand for DDDA. Surging construction activities across the globe are also simultaneously affecting product demand.

A rise in demand for lubricants and adhesives will ultimately drive the demand for dodecanedioic acid in the coming years. Increasing research and development funding by nylon producers for product innovation is predicted to positively impact the market over the course of the forecast period. High demand for screws, gears, and fabrics is also increasing the demand for nylon.

The resin segment accounted for 63.3% of the global dodecanedioic acid market and is anticipated to lead the market at a CAGR of 6.0% by 2025. The growth of this application segment is attributed to an increase in demand for nylon from various end-use industries, especially automotive. Furthermore, an increase in demand from the paints industry is expected to propel product demand.

Bio-based DDDA is predicted to replace a significant part of the demand for and use of petroleum-derived DDDA in the forthcoming years. Nonetheless, resin production is expected to remain the main application area for bio-DDDA in the forecast period. The emergence of the U.S. and Canada as textile hubs is anticipated to spur the penetration of production bases for resins, which will ultimately open lucrative opportunities for dodecanedioic acid.

The powder coatings segment accounted for 15.6% of the global market and is expected to expand at a CAGR of 6.4% over the forecast period due to features such as offering flexibility to polyesters and excellent heat resistance. Moreover, they are solvent-free and produce negligible emissions of VOC, which makes it eco-friendly in nature.

Owing to the presence of DDDA, powder coatings are hydrolytic resistant. The growing powder sector in developing economies due to increasing applications in automotive, construction, and chemical industries is expected to augment demand for dodecanedioic acid. The rise in demand for powder coatings from Latin America is also affecting the overall market.

The robust manufacturing base in emerging economies such as Japan, China, and India, coupled with a rise in demand for powder coatings and industrial paints is expected to drive the demand for nylon. Increasing industrialization and urbanization in developing nations of Asia Pacific is predicted to augment demand for resins and powder coatings.

Rising applications of dodecanedioic acid, such as powder coatings, corrosion inhibitors, paints, adhesives, surfactants, and lubricants, is growing considerably due to improving economies across the globe. However, strict government regulations to control and reduce harmful effects on the human population are restraining market growth.

Asia Pacific accounted for just under 35.0% of the global market in terms of revenue and is expected to expand at a CAGR of 6.1% over the forecast period due to increasing domestic consumption by economies such as China, Malaysia, and Japan. Furthermore, supportive regulations to attract more investments are expected to have a positive impact on the market.

North America also holds a significant share in the market and is expected to expand at a CAGR of 6.1% through 2025 due to the emergence of Mexico as an automotive manufacturing hub. Moreover, increasing demand for luxury vehicles by consumers on a global scale is expected to drive DDDA demand in the region. 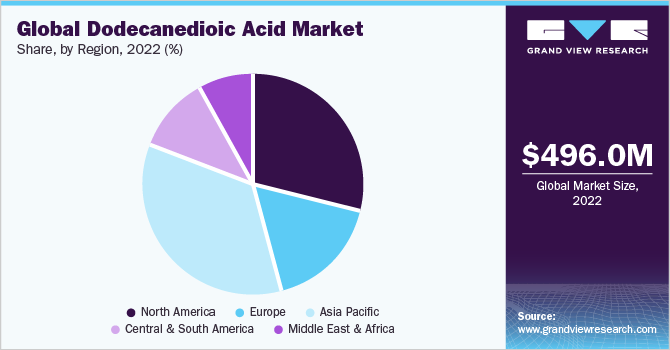 Europe is expected to grow significantly throughout the forecast period owing to growing powder coatings production in economies like Germany. Moreover, players are eyeing product developments as a key opportunity in the market.

Growing demand for bio-adhesives is predicted to offer lucrative opportunities for bio-dodecanedioic acid in the future. Renewable feedstock has offered DDDA producers with cost reduction opportunities and enhanced penetration in heavily regulated markets like North America and Europe. An increase in the use of nylon in the manufacture of high-performance thermoplastics due to its heating abilities is trending in the market.

Major players operating in the market include Invista, Verdezyne, BASF SE, Cathay Industrial Biotech, UBE Industries, Santa Cruz Biotechnology, Cathay, Evonik, Ube, and Invista. The industry has been witnessing an increase in production capacities and easing supply in concurrence to rise in demand in various application sectors. One such example would be of California-based manufacturer Verdazyne, which in 2017, began construction of a new 6,000 ton per year plant in Iskandar, Malaysia.

This report forecasts revenue growth at a regional & country level and provides an analysis of the industry trends in each of the sub-segments from 2014 to 2025. For the purpose of this study, Grand View Research has segmented the global dodecanedioic acid market report on the basis of application, and region:

How big is the dodecanedioic acid market?

What is the dodecanedioic acid market growth?

Which segment accounted for the largest dodecanedioic acid market share?

b. Resins dominated the dodecanedioic acid market with a share of 62.7% in 2019. This is attributable to increase in demand for nylon from various end-use industries, especially automotive..

Who are the key players in dodecanedioic acid market?

What are the factors driving the dodecanedioic acid market?

b. Key factors that are driving the market growth include increasing usage in the production of paints, engineering plastics, corrosion inhibitors, coatings, adhesives, lubricants, and surfactants.