The global Electric Vehicle Supply Equipment market size was valued at USD 18.75 billion in 2019, registering a CAGR of 33.1% from 2020 to 2025. EVSE is supply equipment used for charging electric vehicles in various residential and commercial locations such as homes, corporate offices, highways, parks, hotels, and bus depots. Market growth is favored by increasing initiatives by both public and private sectors to encourage the adoption of electric vehicles (EVs). Several governments have started offering financial incentives, including subsidies and tax benefits, to encourage people to buy electric vehicles, which is contributing to the rise in demand for electric vehicle supply equipment.

In countries such U.S. and China, which are the largest producers of electric energy, the utilities are charging lower tariffs for electricity consumed by EVSE, which is driving the market. Moreover, in recent years, there has been an increase in government initiatives such as the provision of contracts across the globe for the development of charging infrastructure. Besides, the growing emphasis of private organizations such as The Coca-Cola Company and General Motors Company for developing charging stations for its employees’ cars is resulting in the growing demand for electric vehicle supply equipment. Moreover, electricity companies such as Pacific Gas and Electric Company (PG&E) and San Diego Gas & Electric Company are integrating electric vehicle supply equipment by collaborating with EVSE players to meet the demand for charging infrastructure. 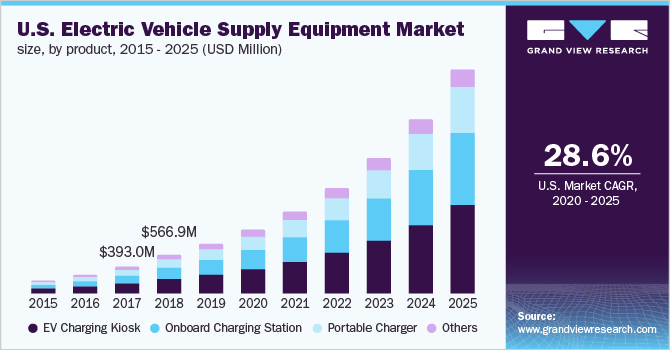 Various public transport agencies, such as the Warsaw Public Transport Authority of Poland, Göteborg Energi of Sweden, and GVB of the Netherlands, are emphasizing on collaborations with bus manufacturers such as VDL Bus & Coach, AB Volvo, and Mercedes Benz for the development of bus charging stations. Besides this, various government agencies are providing funds for the development of charging stations. For instance, in June 2019, Ekoenergetyka-Polska Sp. z o.o. received a contract from MIEJSKI ZAKÅAD KOMUNIKACJI SP. Z O.O. W KUTNIE for the installation of 20 fast-charging stations for electric bus fleet for the city of Warsaw, Germany. This project was partially funded by the City of Warsaw.

The growing emphasis of various governments and automobile companies toward enhancing the performance of charging infrastructure is further expected to boost the market growth. For instance, in 2016, the U.S. announced investments worth USD 4.5 billion and South Korea followed with investments worth KRW 200 billion (USD 180.3 million) to strengthen the uptake of electric vehicle supply equipment market. Furthermore, countries such as France, U.K., Germany, and Belgium are focusing on developing this equipment to promote the adoption of EVs throughout the region.

On the downside, the high costs associated with electric vehicle charging equipment is a major factor threatening to impede the market growth. Furthermore, the development of next-generation fuel cell systems and hydrogen storage technology have led to the emergence of hydrogen fuel vehicles. However, the development of advanced electric vehicle supply equipment such as wireless charging stations and onboard pantographs will negate the impact of the above factors to some extent.

Factors, such as heavy traffic congestions and incomplete combustion of fossil fuels, are responsible for the increasing levels of CO2 and other greenhouse gas emissions. According to the United States’ Environmental Protection Agency (EPA), transportation caused about 26% of the total greenhouse gas emissions in the year 2014. Nearly 1/3rd of the greenhouse gasses are generated by transportation and road transport is responsible for nearly 1/5th of the European Union’s (EU) total carbon dioxide (CO2) emission. The growing contribution of transportation sector towards carbon emission is expected to promote the adoption of electric vehicles, along with increasing need for supporting Electric Vehicle Supply Equipment (EVSE).

Costs associated with electric vehicle charging equipment is emerging as a major factor constraining the growth of the market. There are several costs associated with the charging infrastructure including installation costs, maintenance costs, and operational costs. Moreover, other tasks, such as feasibility analysis, project management, and consultancy, also incur additional costs. Adoption of electric vehicles depends majorly on the availability of adequate charging infrastructure. However, the high costs involved in rolling out the infrastructure can potentially hinder the market growth.

Based on the power type, the market has been segmented into AC power and DC power. The DC power segment dominated the market in 2018 and is expected to grow significantly over the forecast period. A major factor responsible for the growth of this segment is the rise in the number of Public-Private Partnerships (PPP) for the development of level-1 and level-2 DC charging stations in commercial locations. Moreover, DC chargers allow drivers to charge electric vehicles at a faster rate as compared to AC chargers. Increasing adoption of level-1 DC chargers in low emission zones of Europe and North America has further accelerated the growth of the segment.

The AC power segment is projected to witness remarkable growth over the forecast period. Automotive manufacturers such as BMW of America, General Motors, and Tesla are emphasizing on providing AC-powered portable chargers to drivers as a complementary feature in electric cars. Various contractors such as Joju Solar are emphasizing on providing installation, operation, and maintenance services for electric vehicle charging stations in residential spaces. Furthermore, there has been a significant rise in the adoption of level-1, AC chargers among corporate organizations such as The Coca-Cola Company, and GENERAL MOTORS, which is further driving the segment.

Based on the product, the market has been segmented into a portable charger, EV charging kiosk, onboard charging station, and others. The EV charging kiosk segment dominated the market in 2018 owing to the adoption of self-service charging solutions such as EV interactive kiosks with advanced intelligence. Moreover, technological advancements such as integration of Radio-Frequency Identification (RFID) and Near Field Communication (NFC) in EVSE have enhanced the performance of digital payments for EV customers using the infrastructure. Also, the unavailability of the additional workforce in developed countries such as the U.S., the U.K., and Germany has made it difficult for electric vehicle charging station owners to assign customer service representatives during heavy traffic. This is a major factor driving the EV charging kiosk segment.

Based on the charging station type, the market has been segmented into normal charging, supercharging, and inductive charging. The normal charging segment dominated the market in 2018 as a result of the introduction of favorable government initiatives for the development of public charging infrastructure across cities such as Amsterdam, Melbourne, and Beijing. Furthermore, there has been a significant rise in the demand for vehicles equipped with onboard charging stations that use AC voltage for charging vehicles. Additionally, growing demand for electric vehicles used for shorter commutes and those that require few hours of daily charging is driving the segment.

Based on the application, the market has been segmented into commercial and residential, wherein the commercial segment dominated the market in 2018. Favorable government initiatives such as the Trans-Canada highway project, Norway to Italy Electric Highway, and West Coast Electric Highway (WCEH) are driving the segment. Furthermore, electric vehicle supply equipment manufacturers are emphasizing on the development of electric vehicle charging stations at hotels, shopping malls, and resorts to fulfill the demand for charging stations. Increasing emphasis on hospitality companies, such as Hyatt Corporation and Marriot International, Inc., on the deployment of electric vehicle charging stations in their parking facilities, is another factor propelling the growth of the segment. 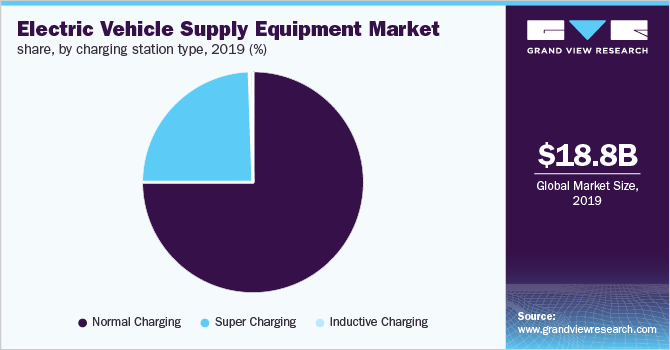 The residential segment is expected to grow significantly over the forecast period. This can be attributed to various subsidies and tax credits offered by various governments on the purchase of electric cars that are mostly charged at residences. Also, various automotive manufacturers are providing residential chargers along with electric cars. Furthermore, overnight charging at homes or residential complexes is the preferred way of charging, owing to benefits such as cost-effectiveness and convenience.

Asia Pacific accounted for the largest share in the market in 2019 and is expected to exhibit the fastest CAGR throughout the forecast period. The emphasis from various governments on increasing the adoption of electric vehicles and supporting charging infrastructure has encouraged various start-ups as well as key global players to develop new charging solutions in collaboration with government agencies. Besides, governments of countries such as South Korea and Japan are emphasizing on expanding EV charging infrastructure through large investments. For instance, the city administration of Beijing (China) has planned to install 1,628 public charging stations at hotels, shopping malls, and parks across more than 10 districts around Beijing. 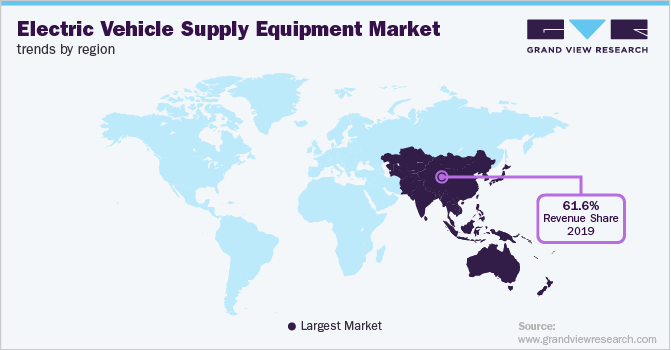 Due to high population, increasing per capita income, and declining cost of electric vehicles, the demand for Electric Vehicle Charging Infrastructure (EVCI) in China is anticipated to witness a rapid growth over the forecast.

The European market is expected to witness remarkable growth over the forecast period. This can be attributed to growing partnerships among automakers such as Daimler AG, BMW AG, and Volkswagen Group for the development of fast charging networks across Europe. Also, oil companies such as BP Plc and Royal Dutch Shell Plc are focusing on the integration of electric vehicle charging stations at existing fuel and gas stations with the help of electric vehicle supply equipment suppliers. Furthermore, growing Public-Private Partnerships (PPP) projects for the development of EVSE at highways are further expected to drive the market in Europe.

Various manufacturers are focusing on gaining long-term contracts with governments to increase their share in the market. For instance, in November 2016, Heliox received a contract from the Government of Oslo for providing 40 charging stations, which include 28 FAST DC 50 kW charging stations and 12 OC 300kW charging stations to the electric bus fleet in the city. In another instance, in February 2014, ABB Ltd. collaborated with Shenzhen BYD Daimler New Technology Co., Ltd. for supplies of DC fast charging units for e-buses.

This report forecasts revenue growth at global, regional, and country levels, and provides an analysis of the latest industry trends in each of the sub-segments from 2014 to 2025. For this study, Grand View Research has segmented the global Electric Vehicle Supply Equipment market report based on power type, product, charging station type, application, and region. 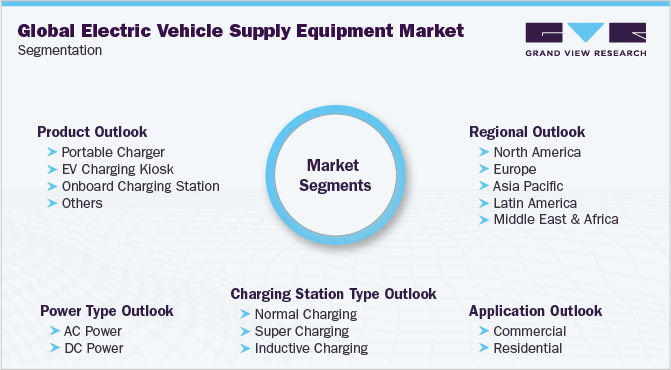