The global flame retardants for aerospace plastics market size to be valued at USD 29.1 million by 2022 and is expected to grow at a compound annual growth rate (CAGR) of 7.5% during the forecast period. The industry is characterized by increasing plastic usage in the aerospace sector and growing safety concerns regarding the flammability of these materials. Confined spaces in aircraft make it imperative to minimize fire hazards and boost passenger and cargo safety, by integrating flame retardants into plastics which are rapidly replacing most conventional materials in the aerospace sector. 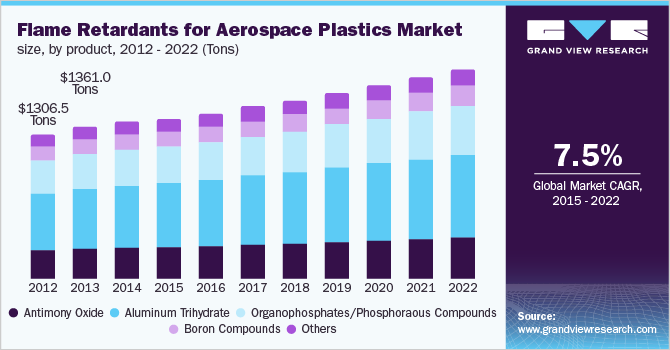 The introduction of non-halogenated retardants such as antimony oxides, alumina trihydrate, and organophosphates has opened up new avenues for growth, even in developed markets that are hampered by stringent regulations. Carbon fiber reinforced plastics (CFRP) has been a major consumer of flame retardants with these composites finding application in a variety of airplane components that range from the cockpit to empennage.

Plastics are widely used in aerospace decks, wings, airframes, cabins, rotor blades, cushion foams, and other interior components. High-performance engineered products such as glass-reinforced plastics (GRP), polyimides, polycarbonates, and even epoxies are rapidly gaining importance over conventional materials such as metal and wood, on account of their lightweight, versatility, flexibility, low maintenance, and high resistance to chemicals and pressure.

The integration of these additives into several plastics has made them impervious to high temperatures as well, making them ideal for intense aerospace applications that require high-temperature resistance on outer surfaces. The latest Airbus A380 has also utilized plastic fiber composites for its wing boxes, reducing overall plane weight by around 1.5 tons. Other modern airplanes developed by Boeing are also integrating up to 50% plastic composites into airplane components in an attempt to lower weight and emissions.

Increasing regulatory interventions by the U.S. EPA, European Commission, and the National Fire Protection Agency (NFPA) have led to the development of several non-halogenated, non-toxic fire suppressants and retardants. Numerous eco-labels such as Germany’s ‘Blue Angel’ and the TCO-label in Sweden are further likely to contribute to sustainable growth in the flame retardants for the aerospace plastics market, especially for non-halogenated products.

Countries such as China, India, the U.S., Brazil, and Argentina are some key consumers, where the aviation industry is expanding at a rapid pace. As per IATA estimates, air passenger traffic was 5.9% higher in 2015 than the previous year. Development of new trade routes, increasing consumer disposable income, and transitioning consumer lifestyles are other factors promoting growth in the aviation industry, subsequently boosting flame retardants demand.

The plastics manufactured with flame retardants such as aluminum hydroxide combined with polymers are able to retain the high temperatures thus enabling them for aerospace applications that require high-temperature resistance in space. The demand for aerospace plastic flame retardants has been driven by the safety concerns for the flammability of aerospace plastics and the increase in use of plastics to maintain ideal weight for the aircraft.

Furthermore, high-presentation manufactured materials like polycarbonates and even epoxies are gaining popularity over traditional materials like metal and wood for their low maintenance, lightweight, flexibility, and excellent chemical and pressure resistance. These advantageous properties of flame retardants for aerospace plastics are expected to further propel the market growth.

One of the most significant benefits of flame retardant plastics in product design is that they prevent sparks that transform into large flames. As a result, the market possesses huge opportunities in the production of electronic equipment, including batteries, transformers, circuit boards, and connectors that have the tendency to ignite.

Flame retardant additives permitted and utilized in aerospace plastics include antimony oxide, aluminum trihydrate (ATH), organophosphates/phosphorous, and boron compounds, including nitrogen molybdenum and magnesium hydroxide. ATH is a low-cost compound, found abundantly in nature and most widely utilized across plastics in aerospace applications.

Red phosphorous, ammonium polyphosphate and other organophosphates emerged as the fastest growing product owing to high demand in intumescent coatings, polyamides, and other aerospace plastic applications. Ammonium polyphosphate (APP) is largely utilized in intumescent systems such as paints and coatings used to protect materials such as combustible plastics & steel. These materials tend to lose their strength when exposed to extremely high temperatures, fostering the demand for organophosphates in fire-resistant polypropylene and other polyolefins.

Antimony oxides are largely used as synergists in conjunction with phosphorous or nitrogen-based compounds for aerospace plastic applications. The product retards the decomposition process and prevents the release of combustible gases, thus aiding in fire prevention and control. Increasing demand for fire-safe products and plastics aboard flights to prevent mishaps and accidents is likely to promote product demand over the forecast period.

In 2014, other flame retardants based on compounds such as nitrogen, magnesium hydroxide, and molybdenum generated significant market demand. Molybdenum compounds are most widely used in cellulosic materials as smoke suppressants but have recently gained popularity in several polymers as condensed-phase flame retardants. Magnesium hydroxide is highly suitable as a substitute for ATH owing to its inherent stability in temperatures above 300°C. The compound is also compatible with processing across diverse polymers, promoting its application in aerospace plastics.

On the basis of application, the market has been segmented into CFRP, GRP, polycarbonate, thermoset polyimides, acetal/POM, epoxies, and others such as polyphthalamide (PPA), polypropylene (PP), and polybutylene terephthalate (PBT).

CFRP was the largest application segment, occupying over 30% of the global volume in 2014. CFRP contributes to significant weight reduction and ultimately fuel cost savings of about 20-30%. The material is increasingly being utilized in defense jets, mainly in armor shields to reduce accidental damage to engine pylons owing to its high impact resistance. Boeing, Airbus, and other international airlines are increasingly developing carbon fiber commercial aircraft owing to these superior product characteristics. 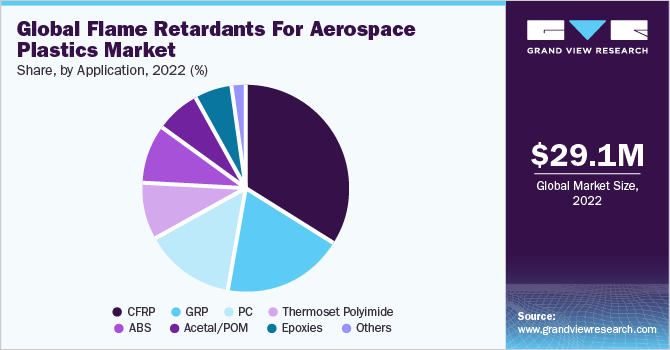 GRP PA 66 is widely utilized to manufacture engine intake manifolds owing to several product advantages that include weight reduction of up to 60%, improved aerodynamics on account of greater surface quality, and overall flexibility. These fibers can be molded as single units and used to reinforce against high stress, thereby improving aircraft safety &durability. The European ‘Eurofighter’ utilizes up to 12% GRP in order to reduce weight, increase strength ratio, and durability.

Regional markets analyzed in the report include North America, Europe, Asia Pacific, and the Rest of the World (RoW). On a global level, Europe accounted for over 40% of the overall industry in 2014. Growth in the region was promoted by the presence of major airline companies such as Boeing and Airbus, among others such as Rolls Royce Holding and the Safran Group. However, the European airspace and manufacturing sectors are strictly monitored, leading to a decline in the production of halogenated retardants and challenging growth for other additives. 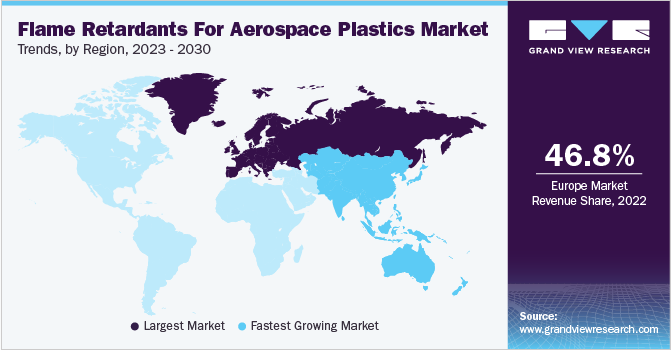 Rising consumer disposable income and growing interest in travel & tourism have boosted the development of the aviation industry in India, China, Thailand, and other emerging economies. Flame retardants are increasingly being consumed for plastics used in aircraft manufacturing across Asia Pacific.

NASA, NORAD, and other aerospace agencies are primarily responsible for integrating various types of plastics and advanced composite materials in their crafts to improve defense, stealth, military, and space exploration vehicles efficiency is expected to boost product demand in the U.S. and Canada. Rising industrialization and growing consumer disposable income in Mexico are also some of the major factors promoting the regional market growth.

The global flame retardants for the aerospace plastics industry are characterized by multinational companies that are integrated along the value chain from manufacturing chemicals to providing flame retardants.

This report forecasts revenue growth at global regional & country levels and provides an analysis of the industry trends in each of the sub-segments from 2012 to 2022. For this study, Grand View Research has segmented the global flame retardants for aerospace plastics market based on product, application, and region. 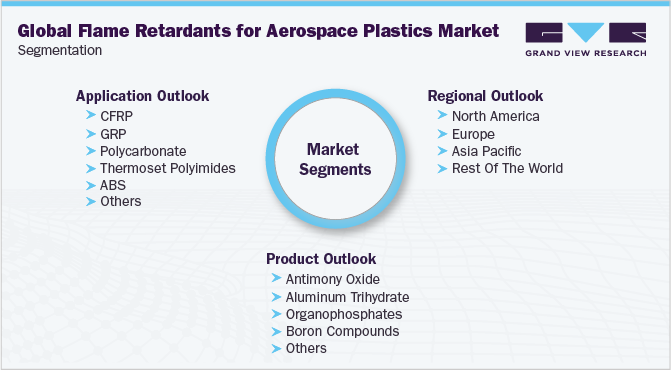