The industry is gaining prominence on account of innovative features offered by the displays, which include automatic touch detector and touch screen panels; radio frequency identification (RFID); Ethernet connectivity; and resistance to high temperature, shock, vibration, dust, scratch, and chemicals. The industry offers a huge investment opportunity as the displays are a suitable replacement for manual processes and outdated push-button technology. 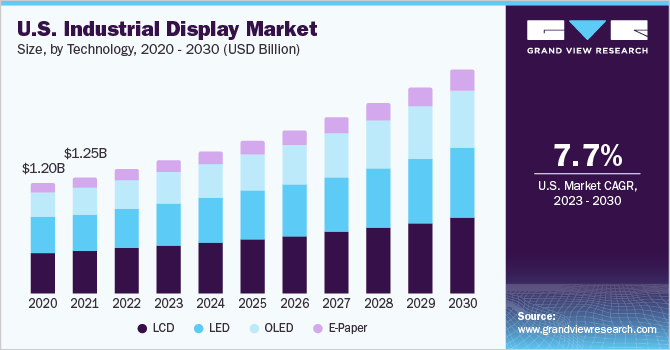 The market is characterized by constant technological innovation to keep pace with the changing industrial needs. Technologies such as Thin-Film-Transistor (TFT) Liquid Crystal Display (LCD), Low-Temperature Poly-Silicon (LTPS), Digital Light Processing (DLP), and Color Filter (CF) are some of the latest innovations in the industry. Advancement and innovation are primarily driven by the growing demand for multi-featured HMIs and smart touch screen displays.

Regulations pertaining to the manufacturing and selling of industrial displays vary at regional or country levels. For instance, the European Union Law on the Restriction of Hazardous Substances (RoHS) has, to some extent, restrict the use of cadmium, lead, mercury, and hexavalent chromium & flame retardants, i.e. Polybrominated Diphenyl Ethers (PBDE) or Polybrominated Biphenyls (PBB) in electronic equipment.

The panel-mount segment accounted for a major revenue market share in 2016 and is expected to dominate the market over the forecast period. Its growth can be attributed to a wide range of applications, easy availability, and affordability of the device. The major application of panel-mount IDs includes operational process control in manufacturing facilities.

Marine displays are used in commercial and shipping vessels, cruise ships, and yachts and are designed specifically to withstand harsh marine environments. These IDs accounted for the lowest revenue share in 2016; however, their market is expected to grow at an estimated CAGR of over 6% over the forecast period. The growth is attributed to its wide range of applications including real-time sonar system for ships, Ethernet integrated combat system for battleships & tank balancing system, unmanned monitoring system for a seaport power substation, and the ship engine monitoring system.

In 2016, the HMI application segment accounted for almost 35% of the overall market revenue share and is expected to witness substantial growth over the forecast period. By 2025, the HMI segment is projected to account for the largest revenue share in the overall market. This can be attributed to global HMI manufacturers expanding their presence in developing countries such as China and India.

The technological revolution is expected to integrate the global reach of the internet with the ability to directly control industrial machinery, infrastructure, and operational processes in factories. The robust growth in IIoT applications has increased the demand for HMI devices, which is anticipated to witness rapid growth over the forecast period.

The interactive display enables two-way communication between the machine and user; their market is expected to witness the highest CAGR from 2017 to 2025.

Display manufacturers are patenting their technological innovations to expand their revenue share in the market. For instance, LED HERO Electronic Technology Co., Ltd. holds patents for its transparent LED products.

The LCD technology accounted for over 40% revenue share in 2016. However, its revenue share in the overall market is expected to decline over the forecast period. This may be attributed to the increasing adoption of the OLED technology due to its pixel-by-pixel brightness controlling feature, which is not available in LCDs and LEDs. Moreover, contrast effects are better managed in OLED as compared to LCDs and LEDs. The OLED technology is expected to grow at the highest CAGR over the forecast period.

The manufacturing sector is the most dominant segment and is expected to account for the highest revenue share over the forecast period. This may primarily be attributed to the growing demand for display panels with embedded features to improve efficiency in manufacturing processes. For instance, the in-built alarm feature used in manufacturing facilities gives real-time signals directly to the operation manager in case of an unforeseen event.

The energy & power sector is expected to account for a CAGR of over 6.5% from 2017 to 2025. This sector is projected to witness the highest growth in Asia Pacific with countries such as Japan, China, and India being the most dominant markets. 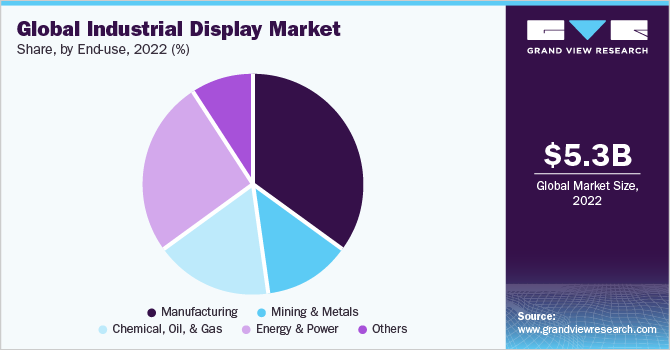 The North American region dominated the industrial display market with a revenue share of over 30% in 2016. This may be accredited to increased investments in IIoT applications and multi-featured HMI devices. The growing adoption of HMIs and digital signage in the region is expected to open new business opportunities over the forecast period. Moreover, the region is one of the early adopters of industrial automation and is projected to integrate these displays at a faster pace.

The U.S. is estimated to capture a significant proportion of the market, on account of the high demand generated from remote monitoring and HMI applications. Additionally, the South East Asian countries such as India, Japan, and China are also driving market growth in the Asia Pacific region.

The Asia Pacific region is projected to witness the highest CAGR over the forecast period. The power generation and manufacturing sectors are expected to play a major role in driving the demand for industrial displays in the region. Moreover, several prominent manufacturers are based in the Asia Pacific region.

Key players in the market include Samsung Display, LG Display Co., Ltd., Japan Display, Inc., Advantech Co., Ltd., and WinMate, Inc. Several players have carried out Mergers & Acquisitions (M&A) in the market to tackle the challenges of in-house R&D and develop innovative technologies. For instance, in October 2016, Pepper+Fuchs GmbH acquired ecom Instruments GmbH, which is a supplier of mobile phones, tablets, and 4G smartphones. The acquisition has helped Pepper+Fuchs GmbH to expand its product offerings and accelerate the rate of product development.

This report forecasts revenue growths at global, regional, and country levels and provides an analysis of the industry trends in each of the sub-segments from 2016 to 2025. For the purpose of this study, Grand View Research has segmented the global industrial display market based on type, technology, application, panel size, end-use, and region.