The global krill oil market size was estimated at USD 275.6 million in 2019 and is expected to witness a revenue-based CAGR of 11.6% during the forecast period. This is attributed to the rising geriatric population, particularly in developed economies such as Germany, France, Japan, and the U.K. Growing health awareness among consumers across countries such as India, China, and the U.S. is projected to augment the demand for nutrient-rich food and beverage. 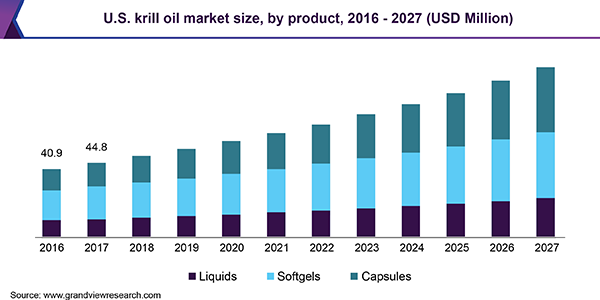 Buyers are inclining toward foods with high nutritional value. With respect to this, rising income levels and increasing urban population are likely to drive the demand for krill oil products in the market. Globally, the young age population is significantly gaining awareness and adopting healthy foods in their dietary regimes which will surge the demand for krill oil over the forecast period.

Dietary supplements, functional food and beverages, and pharmaceuticals are the major application segments owing to rising demand for sports supplements along with the growing awareness about gastrointestinal health. The demand for pet and animal feed is anticipated to witness high demand on account of increasing pet ownership and rising disposable incomes in the global market. Growing product innovation in the animal and pet feed market is expected to boost the demand for krill oil over the forecast period. Rising demand for fortified pet food products is expected to further propel the demand for krill oil in this application segment.

Technological advancements in the manufacturing of Active Pharmaceutical Ingredients (APIs) and highly potent active ingredients are expected to augment the demand for omega 3. This, in turn, will propel the overall market growth over the forecast period. Krill oil suppliers are facing challenges due to high production costs and low economies of scale from the supplier end. The bottlenecks associated with production costs exist at the point of extraction, oil filtration, separation, and refining. This increases the overall costs of the product resulting in hindering the growth of the market.

Krill-rich regions, such as South Georgia, may face a serious challenge as a future krill habitat owing to the recent shift toward the south in distributional limits of zooplankton, coupled with the growing water temperatures. In addition, climatic changes, such as alteration in mixed-layer depth, are likely to affect the spatial distribution of production and the phytoplankton community structure. Consequently, these climatic changes are adversely affecting the krill population, which will further restrict the demand for krill oil in the forecast period.

On the basis of product, the krill oil market has been segmented into liquids, softgels, and capsules. Liquid krill oil is a liposomal product and is ideal for infant nutrition, which in turn is projected to exhibit a high demand over the forecast period. The growing demand for liquid krill oil in infant formulations and pet food is expected to drive segment growth over the upcoming years.

The applications of soft gel, on the other hand, have become highly popular in the market and expected to record significant growth over the forecast period. Softgels are highly popular due to their smooth texture and taste masking capabilities. In addition, flexible shapes make softgels easier to swallow.

The growing consumption of omega 3 polyunsaturated fatty acids in functional foods and pharmaceuticals is expected to drive the demand for krill oil over the forecast period. Rising awareness regarding healthcare and chronic diseases, expanding application profiling of omega 3, and regulations favoring the usage of the said product in infant formulations are expected to spur the demand for krill oil in developed economies such as U.S., Germany, U.K., Japan, and France. 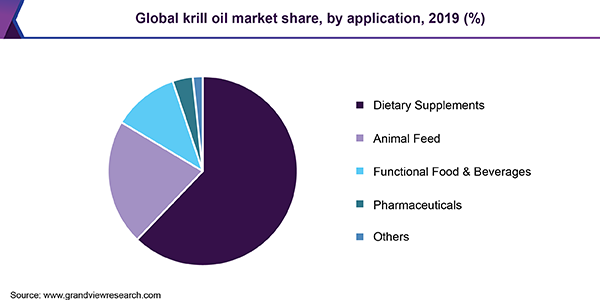 Health benefits offered by the consumption of eicosapentaenoic acid (EPA)/ docosahexaenoic acid (DHA) including reducing bad cholesterol, blood pressure, and coronary heart diseases, such as heart attacks and strokes, are expected to drive the overall market in the near future. Moreover, increasing spending on the pharmaceutical sector in China, India, Indonesia, Malaysia, Philippines, Singapore, Thailand, and Vietnam is likely to stimulate industry expansion. High investments by foreign players including Swiss company Novartis, British firm GlaxoSmithKline (GSK), and Germany’s Bayer are further expected to propel industry penetration over the next few years.

North America accounted for over 23.2% of the global market revenue share in 2019. Supplement and functional foods, infant formulas, and pharmaceuticals are some of the major application segments in the region. Rising consumer inclination toward fitness in the U.S., Canada, and Mexico is expected to drive product demand in functional food and beverage application. Moreover, growing health benefits and the introduction of new product forms of dietary supplements are further expected to boost the demand for krill oil in North America over the upcoming years.

The growth of omega 3 in the Asia Pacific is boosted by rising demand for the product in countries such as China, India, Singapore, South Korea, Australia, and Japan. The penetration of krill oil in the daily diet, as well as increasing health awareness among consumers, is augmenting the demand for omega 3 in this region. Moreover, the growing cultivation of krill fish in the South China Sea and the Indian Ocean is expected to further drive the Asia Pacific market over the next few years.

Increasing utilization of krill oil in the pharmaceutical industry coupled with growing research and development activities is likely to drive the market. In addition, the growing consumption of improved medication along with the need to increase the life expectancy of the aging population is expected to propel the demand for krill oil-based pharmaceutical products in the region over the forecast period.

The major companies involved in the market have a prominent presence in the nutrition supplements industry. These companies work toward the introduction of different product forms to cater to a large population. Previously, the product was only available in a tablet form, but manufacturers have now developed it's liquid and powder forms as well.

The major roadblock faced by manufacturers involves the fishing of krill. Krill fishing is highly regulated by CCAMLR, which limits the quantity of krill fish fishermen can catch per year. Key players include Aker BioMarine, Rimfrost AS, and Neptune Wellness Solutions Inc. The market is moving towards consolidation on account of the recent acquisitions of Neptune Wellness Solutions and Enzymotec Ltd. by Aker Biomarine in 2017.

This report forecasts volume and revenue growth at global, regional, and country levels and provides an analysis of the latest industry trends in each of the sub-segments from 2016 to 2027. For the purpose of this study, Grand View Research has segmented the global krill oil market report based on product, application, and region:

b. Europe dominated the krill oil market with a share of 37.6% in 2019. This is attributable to increasing utilization of krill oil in the pharmaceutical industry coupled with growing research and development activities.

b. Key factors that are driving the market growth include the young age population significantly gaining awareness and adopting healthy foods in their dietary regimes which will surge the demand for krill oil.