The global medical disposables market size was valued at USD 184.5 billion in 2015 and is projected to grow at a CAGR of 6.5% over the forecast period. The growth of this market is attributed to the increasing prevalence of lifestyle-associated and other chronic diseases. In addition, increasing awareness of the patient pool regarding the infection prevention control norms would also fuel the market for medical disposables.

Limiting the risk of infection and cross-contamination is one of the primary aims of healthcare professionals and governments worldwide. Most of the medical disposable product manufacturers are using high-quality instruments, which are driven by sustainable material, process and design innovation, resulting in effective product engineering and design.

High prevalence of chronic diseases, growing geriatric population, and increasing demand for sophisticated healthcare facilities are some of the major factors that are contributing to the growth of the medical disposables space. Furthermore, increasing volume of patient admissions in hospitals and government-enforced mandatory guidelines to improve the quality of patient care are expected to boost the penetration of medical disposables in the near future.

Drug delivery products segment captured the largest share in 2015. The growth of this segment is expected to be the fastest during the forecast period. Increased application of disposable pre-filled syringes, needles, and transdermal patches owing to their advantages is the key factor driving the segment growth. Diagnostic and laboratory disposables segment is the second fastest growing due to the surging adoption of these products, employed to enhance the accuracy of the test results, and reduced risk of contamination. Also, these products are affordable compared to the reusable test kits since the cost associated with sterilization and other cleaning techniques are avoided.

Plastic resins captured the largest revenue share in 2015. Various types of plastics such as polyvinyl chloride, polypropylene, and polystyrene are widely used for manufacturing medical disposables in the healthcare sector. Such plastic resins are safe and are available in user friendly designs, hence propelling their adoption. 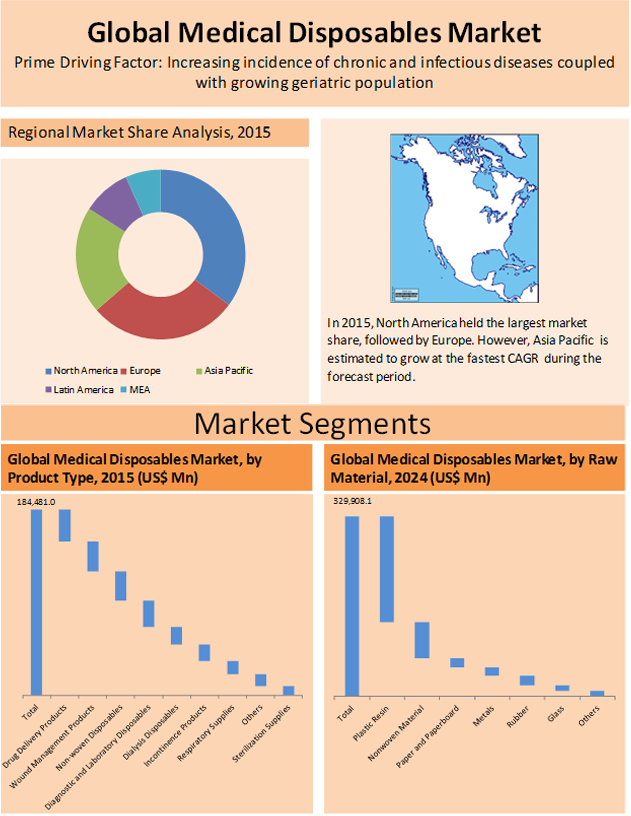 Nonwoven material is forecasted to grow at the fastest CAGR due to its low weight, affordable cost, and lesser risk of cross-contamination. Products composed of nonwoven material provide better hygiene and protection to patients and healthcare professionals. Hence, due to the aforementioned factors, the nonwoven material segment is anticipated to boost the market growth.

North America captured the largest share in 2015. The domination of the region is attributed to the presence of a well-established healthcare infrastructure, higher adoption rate of advanced technology, and growing awareness regarding effects of cross-contamination and infection control measures in healthcare facilities are the factors attributed to the domination of the region. Europe followed North America in the same year with a share of over 28.0%. The high healthcare spending in the developed economies, such as Germany, France, and Italy, is the factor driving the sector growth in the region.

Asia Pacific is expected to exhibit a lucrative growth during the forecast period. The presence of a large number of players engaged in the development of medical disposable products in countries, such as Japan and India, are expected to boost the growth of the medical disposables sector in the region. In addition, growing prevalence of chronic disorders due to sedentary lifestyles is expected to propel the market growth in the Asia Pacific region.

The medical disposables market is fragmented with few international players, such as 3M, Johnson & Johnson, and Abbott Laboratories, competing with each other

Different players are operating in the varied segments of the medical disposables sector. However, the overall vertical is fragmented with a few international players competing with each other. Also, these international players are dominating the global market since brand identity and quality of products offered by these players is more reliable than those provided by the domestic players.

Some of the major players include but are not limited to 3M, Johnson & Johnson Services, Inc., Abbott, Becton, Dickinson & Company, Medtronic, B. Braun Melsungen AG, Bayer AG, Smith and Nephew, Medline Industries, Inc., and Cardinal Health.