The global metal cutting machine market size was estimated at USD 5.99 billion in 2016. Increasing global demand from several application industries to cut various industry components with high precision level and edge quality is expected to be a key growth factor. In addition, growing automotive industry in Asia Pacific is anticipated to fuel the demand over the forecast period. 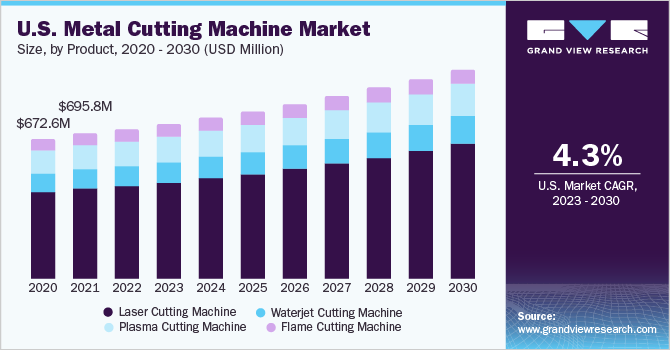 The MCM is widely used to cut various types of ferrous and non-ferrous metals to create assemblies, individual parts, or large-scale structures. Different types of metals are brought to specified geometry to manufacture desired object by removing excess material with the help of various cutting tools.

In the U.S., the aerospace & defense segment is anticipated to witness the fastest growth rate over the forecast period. This segment was estimated at USD 85.1 million in 2016 and is expected to witness a growth rate of 6.9% from 2017 to 2025. Robust growth in the aerospace & defense industry, on account of ongoing technology innovations and increasing military expenditure in the country especially after new administration got elected in 2017, is expected to propel metal cutting machine market growth over the forecast period.

However, lack of skilled labor and high cost of labor are posing a challenge to the growth of the market. In light of the ageing population of the current machine operator workforce and lack of newly skilled laborers across the world is expected to affect the various metal application industries. In order to meet current and future market demands, new equipment and technologies are required, that are less complex but highly efficient.

These machines are widely used in Asia Pacific and Europe region owing to the presence of major economies such as China, India, Japan, South Korea, Germany, and the U.K. that are witnessing high growth from the manufacturing sector. Increasing demand from the building & construction industry, especially HVAC systems is anticipated to drive the growth over the forecast period.

The global laser cutting machine demand was valued at USD 2.93 billion in 2016 and is projected to grow at a CAGR of 6.1% between 2017 and 2025. The laser machine is used to cut hard metals and allows fabricators to create high-quality structures. It provides a stream of coherent, collimated light waves, which gives exceptional direction ability and intensity. The process is carried out by using two types of lasers including CO2 and YAG.

Waterjet cutting machine cuts the metal using a jet of water at high pressure and velocity or a mixture of water with an abrasive substance. It is often used during fabrication or manufacturing of machinery parts and other heavy equipment. It is commonly used for cutting heat-sensitive, brittle, hard or thin metals in intricate shapes or to form specific edge shapes.

The Aerospace & defense segment accounted for USD 1,134.8 million in 2016 and is expected to grow at a predicted CAGR of 5.9% from 2017 to 2025. The MCM plays a very important role in the manufacturing of military and aviation components & equipment. It is very efficient and effective to produce high precision finished products such as engine parts, turbines, ignitors, ammunitions, and guns.

In the automotive industry, MCMs are used extensively for a wide range of interior and exterior components of various automotive such as SUV’s, passenger cars, and HUV’s. In addition, it can also be used to produce various components ranging from weather stripping & carpets to door panels & chassis. MCMs in this application segment are used based on thickness, type of material and dimensional requirements.

These machines are used widely for manufacturing industrial construction equipment such as paving, earth moving, and cranes. In addition, it is also used to cut holding tanks, corrugated steel, gates, elevators, stairs, bridges, and other components that are in the construction of home and buildings.

The Asia Pacific and Europe regions are projected to be key markets from 2017-2025, driven by the increasing demand from the various application industries. Asia Pacific is anticipated to remain a hub for the high-tech manufacturing, especially for electronics, automotive, aerospace & defense industry. Huge investment in the automation and clean technologies to deliver efficient and quality end-use products with less environmental impact is anticipated to fuel the manufacturing sector in Asia Pacific in the coming years. 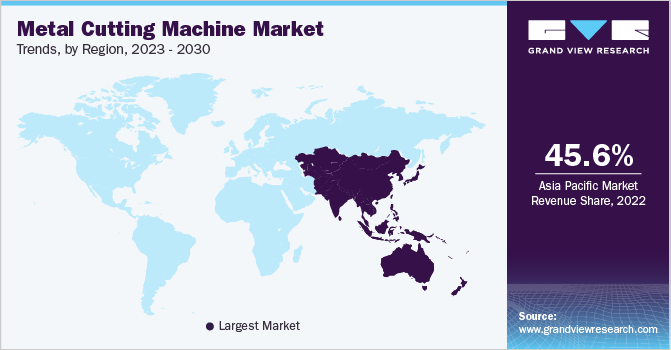 Asia Pacific was followed by Europe, accounting for 24.47% of the total revenue in 2016. Central & South America was estimated at USD 707.0 million in 2016 and is projected to grow at the rate of 3.5% between 2017 and 2025. Increasing military budget and passenger traffic is anticipated to boost the defense and commercial aircraft manufacturing in the region over the years ahead. In addition, the presence of major defense and aerospace industry players in the region is further contributing to the market growth through continuous technological innovations.

The global market is fragmented in nature. The key players are focusing to achieve optimum growth and widen their presence through various strategies. These strategies include partnerships, agreements, acquisitions, and capacity expansion in new area. Increasing need for advanced mechanized MCMs to avoid hazardous health and safety issues of operator is encouraging buyers to purchase the product.

This report forecasts revenue growth at global, regional & country levels and provides an analysis on the industry trends in each of the sub-segments from 2014 to 2025. For the purpose of this study, Grand View Research has segmented the global metal cutting machine market on the basis of product, application, and region: