The global ovarian cancer diagnostics market size was estimated at USD 1.2 billion in 2018 and is expected to grow at a CAGR of 6.2% during the forecast period. Rising prevalence of ovarian cancer and increasing emphasis on early diagnosis & treatment are expected to drive market growth.

As of 2018, ovarian cancer had the highest mortality rate of all gynecologic cancers. It accounted for nearly 14,000 deaths in the U.S. in 2018. The disease has generic symptoms, such as bloating, abnormal menstruation, vaginal bleeding, indigestion, and fatigue, among others. No specific symptoms make an early diagnosis of the disease increasingly difficult. 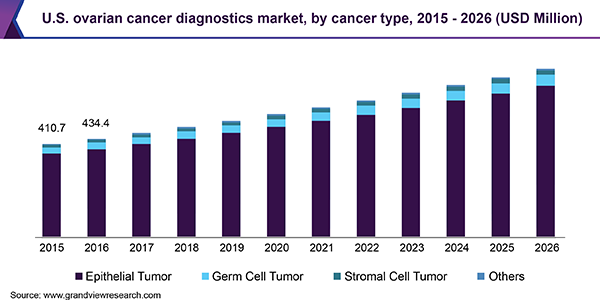 Diseases prognosis remains poor as the majority of patients are diagnosed at an advanced stage. Thus, there is a strong need for extensive research to understand disease biology to develop effective treatment options, with the goal to overcome resistance and minimize toxicity. Further biomarker development could improve the identification of patients who need a maintenance approach.

Factors such as an increase in the number of initiatives by governments and a rise in funding for ovarian cancer research are expected to drive the market. For instance, the Ovarian Cancer Research Alliance (OCRA), a not-for-profit organization, is focused on the R&D of ovarian cancer. It sponsors several research programs pertaining to the diagnosis & treatment of this disease.

Lack of knowledge about exact causative factors and late diagnosis of the disease are some key factors restraining growth. There is a high unmet need for a deeper understanding of the underlying molecular mechanisms to identify key genes or biochemical pathways that could be targeted for diagnosis & treatment. However, rising healthcare expenditure and increasing technological advancements are creating growth opportunities for the overall market.

The type of ovarian cancer is determined by the location of developing cancerous cells. Epithelial tumors remained a forerunner in this segment, accounting for over 90% of all ovarian malignancies, in 2018. Epithelial tumors can be serous, mucinous, endometrioid, or clear cell. Most patients with epithelial cell carcinoma are diagnosed after the tumor has metastasized within the peritoneal cavity. Seventy to eighty percent of patients are diagnosed in the advanced stage, thereby significantly reducing treatment options and survival rates.

Germ cell and stromal cell tumors, collectively, capture a smaller share of this market. Stromal tumors develop in the tissues responsible for producing hormones such as estrogen, progesterone, and testosterone. Germ cell tumors, although rare, are most prevalent in women aged between 20 and 30 years.

Imaging techniques accounted for the largest share in 2018, owing to the increasing importance of early diagnosis and cancer staging. Transvaginal ultrasound remains the preliminary imaging technique to view a tumor internally and measure its size. CT scan is preferred for cancer staging but is limited to small tumors. More advanced imaging techniques, such as MRI and PET scans, are used to detect metastasis and disease severity.

The market for blood tests is expected to witness steady growth throughout the forecast period on the back of technological advancements and increasing consumer awareness. Ovarian cancer can lead to elevated levels of certain biomarkers, which act as tumor markers that aid in diagnosis. For instance, CA-125 is the most common blood test for this disease. Rising emphasis on genetic counseling and tests has resulted in deeper market penetration for HER2, BRCA, and KRAS mutation tests.

Hospital laboratories held the largest share in 2018. The growth of this segment can be attributed to increasing patient inflow for cancer diagnosis in hospitals, growing consumer awareness, and rising investments in healthcare infrastructure in developing and underdeveloped countries. 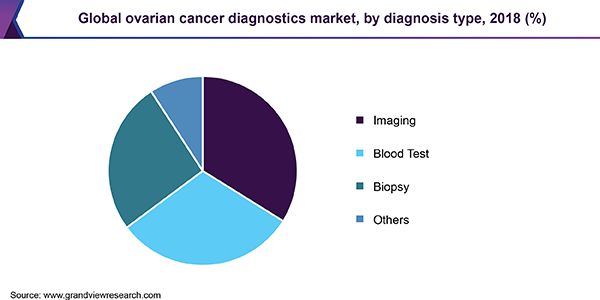 The market for research institutes is expected to grow at the highest rate during the forecast period owing to increasing funding for cancer research worldwide. For instance, Fred Hutchinson Cancer Research Center is dedicated to the discovery of biomarkers and screening of ovarian cancer.

North America accounted for a share of more than 45% of the overall market in 2018, owing to strong commercial performances of gynecologic diagnostics in the U.S. Favorable government initiatives, increase in healthcare expenditure, and presence of key manufacturers are some of the other factors contributing to the growth of the market in this region. Asia Pacific is expected to grow at the highest rate during the forecast period, owing to factors such as overall economic development, improvement in healthcare infrastructure, an increase in disposable income, and a rise in consumer awareness. The ovarian cancer diagnostics market in emerging countries such as China, India, and South Korea is expected to witness rapid growth during the forecast period.

This report forecasts revenue growth at global, regional, & country levels and provides an analysis on the latest industry trends in each of the sub-segments from 2015 to 2026. For the purpose of this study, Grand View Research has segmented the global ovarian cancer diagnostics market report on the basis of cancer type, diagnosis type, end use, and region: