The global single-use bioprocessing probes and sensors market size was valued at USD 1.45 billion in 2019 and is expected to expand at a compound annual growth rate (CAGR) of 16.2% from 2020 to 2027. The advent of single-use technology has resulted in new perspectives in sensor and probe technology. With the continued adoption of disposable systems in pre-clinical scale biopharmaceutical production, several companies are making attempts to expand their implementation in a commercial scale, thereby driving the market. Moreover, due to the high demand, the supply chain for disposable technologies has become more robust over time to cover various technologies and serve the growing expectations from customers. The growing interest in disposables probes and sensors has been observed among in-house manufacturers as well as CMOs. OEMs like Sartorius Stedim Biotech offer integrated single-use sensor assemblies for single-use bioreactors with different scales. These integrated single-use sensor assemblies are developed to ensure robust performance and can be compared to conventional probes. 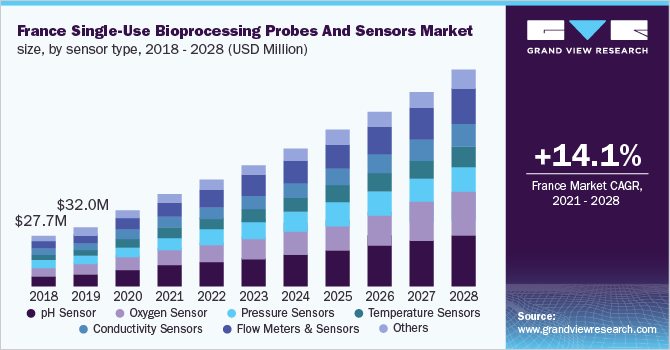 The collaborations between OEMs and independent suppliers of sensors help in delivering complete single-use assemblies with trusted integrity. For instance, in March 2019, Pall Corporation collaborated with Broadley-James Corporation, a provider of sensor technology, for the integration of Broadley-James’ advanced single-use probe and flow cell pH sensors into Pall Biotech’s single-use (SU) technologies. Such collaborations are aimed at accelerating the use of disposables sensors across upstream and downstream unit operations.

Furthermore, the development of single-use sensors with expanded use is expected to boost the market growth. Projects such as “Single-use glucose sensors for bioreactor” by Stobbe Tech, C-CIT, and Zurich University of Applied Sciences in the past years, which aimed at developing single-use sensors for on-line measuring of glucose and lactate in bioreactors, have positively impacted the revenue growth over the past years.

Being an integral part of a single-use container, pH sensors held the largest share of 20.5% in 2019. This is attributed to high product penetration as well as usage rate. Technological advancements in this sensor type, such as the development of pH sensors with in-built temperature sensors, are expected to drive the segment. Furthermore, the measurement of Dissolved Oxygen (DO) is one of the most monitored physicochemical parameters in bioprocessing engineering.

The development of disposable sensors that enable users to measure DO separately has driven the segment. The presence of companies like Finesse; Hamilton Company; Polestar Technologies; Eppendorf AG; Scientific Industries, Inc.; and Applikon Biotechnology, Inc., which are engaged in manufacturing and marketing of disposable sensors to measure DO, has contributed to the significant growth of this segment.

Over the past years, a number of developments have been made in flowmeter technology to address the issues, such as incorrect flowmeter installation and material incompatibility, resulting in the lucrative growth of the segment. Among all the flowmeters, Coriolis technology delivers the highest level of accuracy and precision and this technology is least affected by the changes in viscosity and conductivity.

Upstream processing dominated the market with a revenue share of 75.7% in 2019. The adoption of single-use bioreactors and media bags by bio manufacturers in the upstream manufacturing process has significantly increased the usage of sensors in this segment. An effective upstream process generally relies on the identification of Critical Process Parameters (CPPs) and the utilization of a bioreactor type, which can provide good control over CPPs.

In an upstream process, CPPs that are generally monitored include temperature, Dissolved Oxygen (DO), and pH. In addition, other factors such as culture viability, viable-cell density, nutrient levels, specific growth rate, and other measurable parameters are considered as CPPs. On the other hand, although single-use technologies have gained significant ground in biomanufacturing, the biggest challenges still lie in separation and purification.

In downstream processing, the affinity capture step and the polishing/purification are recognized as intensive and costly. Overall, less penetration of single-use systems in downstream processes resulted in less revenue share of this segment. However, with constant attempts by operating players to expand the use of disposables in the downstream process, this segment is expected to witness considerable growth in the coming years.

Biopharmaceutical manufacturers accounted for the largest revenue share of 57.6% in 2019 as they are the key end-users of this market. Constant new product developments and accelerated adoption of disposables among contract service providers as well as in-house bio manufacturers to meet the growing global demand for biopharmaceuticals efficiently are among the major factors fueling the segment growth.

Several contract service providers are engaged in the expansion of their manufacturing facilities by installing single-use instruments at their plants. For instance, WuXi Biologics, a CDMO and part of WuXi AppTech, is proactively expanding its biomanufacturing capacity with several investments over the course of the past year in single-use technology. 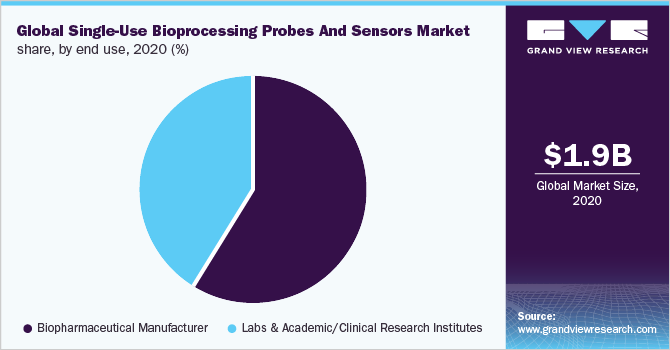 OEMs such as Sartorius Stedim Biotech and GE Healthcare are at the forefront in innovation for single-use assemblies using products from independent suppliers. Suppliers like PendoTECH are involved in selling a substantial volume of their sensors and monitors to OEMs for GMP production, pilot and toxicology studies, and clinical batches. New product launches by independent suppliers directly benefit the OEMS, thus boosting the growth of this segment.

North America accounted for the largest revenue share of nearly 34.0% in 2019. The U.S. market is home to most of the biopharmaceutical manufacturers, such as CMC Biologics; FUJIFILM Diosynth Biotechnologies U.S.A., Inc.; Amgen; DPx Holdings; and AbbVie, Inc. In addition, the ancillary steps associated with bioprocessing, such as viral vector manufacturing, are undertaken by a substantial number of players that are headquartered in North America.

Moreover, the highest revenue-generating OEMs like GE Healthcare, Thermo Fisher, and Pall Corporation are headquartered in the U.S., thereby contributing to the growth of the North American market. In addition, the largest revenue share of the U.S. market is supported by the presence of several small players, like PBS Biotech, Inc. and Entegris, Inc.

Asia Pacific is expected to expand at the fastest CAGR throughout the forecast period owing to the recognition of Asian countries as the hub for biopharmaceutical outsourcing. Growing markets such as China and India significantly increase the revenue generation in the region. Moreover, the incorporation of disposable products by Asia-based bio manufacturers from key global suppliers in their cGMP biomanufacturing facility is fueling regional growth.

Market players are undertaking various strategic initiatives, such as alliances with OEMs and new product development with improved technical intricacies, to boost their organic revenue growth as well as market presence.

Furthermore, the single-use probes and sensors manufacturers are engaged in the expansion of manufacturing capabilities and the development of new products to meet the growing demand in the biopharmaceutical industry. For instance, in April 2019, Emerson Electric Co. launched Rosemount 550DW dissolved oxygen single-use sensors adapter, which is compatible with stainless steel DO sensors and can be used in the bioreactor single-use bag. Some prominent players in the global single-use bioprocessing probes and sensors market include:

This report forecasts revenue growth at the global, regional, and country levels and provides an analysis of the latest industry trends and opportunities in each of the sub-segments from 2016 to 2027. For the purpose of this study, Grand View Research has segmented the global single-use bioprocessing probes and sensors market report on the basis of sensor type, workflow, end-use, and region:

How big is the single-use bioprocessing probe & sensors market?

b. The global single-use bioprocessing probe & sensors market size was estimated at USD 1.45 billion in 2019 and is expected to reach USD 1.88 billion in 2020.

What is the single-use bioprocessing probe & sensors market growth?

b. Optical sensors dominated the single-use bioprocessing probe & sensors market with a revenue share of above 35% in 2019. This is attributable to high penetration in terms of product availability coupled with the increasing importance of pH & oxygen monitoring during product development.

Who are the key players in single-use bioprocessing probe & sensors market?

What are the factors driving the single-use bioprocessing probe & sensors market?