The U.S. acids market size was valued at USD 6.3 billion in 2020 and is expected to expand at a compound annual growth rate (CAGR) of 5.4% from 2021 to 2028. The growth is attributed to increasing demand for convenience food along with technological innovations for the production of cost-effective products in the country. 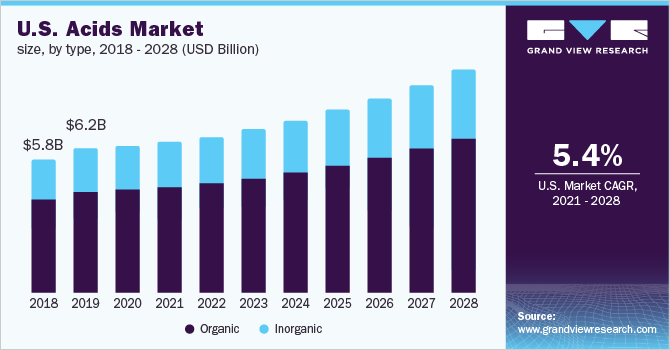 The demand for organic acids is growing in the animal feed industry due to their ability to improve the performance of aqua, poultry, swine, and other feeds. Numerous research initiatives and investments have been made in the microbial fermentation process to increase productivity and yield through the selection of new strains. This can be achieved by improving the recovery and process of purification, optimizing the fermentation process, and employing genetically modified microorganisms.

Antibiotics are shown to improve weight gain in animals by reduction of clinical and subclinical infection by eliminating the presence of bacteria in GIT and consistently reducing immune stimulation and enhancing nutrient digestibility. These factors, among others, are considered as quality parameters desired in an effective antibiotic alternative. Despite the availability of numerous alternatives in the market, organic acids are the most effective alternatives that can increase nutrient digestibility and reduce pathogenic bacteria through their effect on pH in the GIT.

Phosphoric acid is used in wastewater treatment to remove the discharge of contaminants to the environment. It is used to prevent scale formation and corrosion in the water distribution system. In textiles, it is used as an oxidizing agent. With the increasing market growth of the textile industry in the U.S. due to the changing lifestyle and high living standards, the demand for phosphoric acid is likely to grow.

The organic type segment dominated the market and accounted for a revenue share of over 70.0% in 2020. This is attributed to the rising use of organic acids in animal feed as well as a substitute in several end-use industries. The demand for food and beverages is expected to increase due to its growing penetration in the meat, poultry, and seafood industries.

Organic acids, mainly produced using microbial pathways, are gaining more importance due to their rising demand in the biotechnology market. The microbial pathways are, however, less preferred in comparison to the chemical synthesis method as the latter can be produced more economically by synthetic rather than fermentation processes. This trend is expected to change over the coming years with the discovery of new applications and rising costs of petrochemicals. 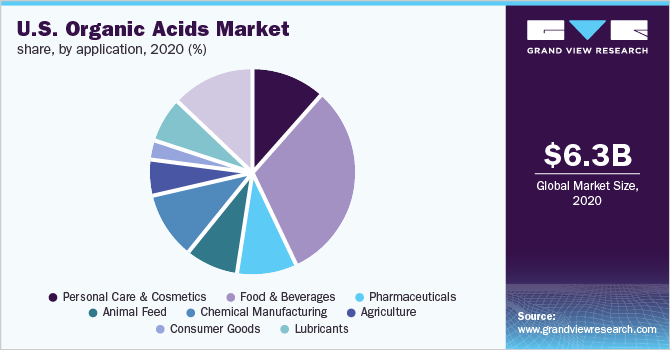 Major application areas of organic acids comprise agriculture, animal feed, and food & beverage, among others, which have gained significant recognition over the past years. Benzoic, butyric, myristic, malic, mid-chain fatty, sorbic, lactic, and fumaric acids are used as feed preservatives for animal nutrition.

Organic acids and their derivatives are predominantly used in feed production and food and beverages in the U.S. The analysis of organic acids is carried out by gas chromatography-mass spectrometry for the separation of derivatives. Organic acid salts are the acidifying substances that are added to the feed to improve the feed conversion efficiency and inhibit the development of pathogenic microorganisms in the intestine.

An inorganic acid is derived from one or more inorganic compounds. The commonly used inorganic acids are sulfuric, hydrochloric, hydrofluoric, and nitric acid. The rising U.S. population has led to an increase in local food manufacturing, thus driving the fertilizers production, and further triggering the product demand. These types of acids are also incorporated during the metal extraction process. Thus, expansion in end-use industries is anticipated to drive the market over the forecast period.

The food and beverages application segment dominated the U.S. inorganic acids market and accounted for the largest revenue share of over 30.55% in 2020. This is attributed to the growing demand for functional food products in the country. Additionally, surging demand from several end-use industries such as animal feed, and pharmaceuticals among others are likely to drive the market over the forecast period.

The market is observed to be rising significantly over the past couple of years due to increasing innovations in the application industries and increased demand for advanced technology-based products. Most of the players in the market are focusing on differentiating themselves from other players as the market is highly competitive and fragmented.

Companies operational in the global market are focusing on increasing their exposure in the regional markets. For instance, in 2019, Thirumalai Chemicals Ltd. announced to set up its subsidiary in the U.S. to manufacture malic and fumaric acids. This step helps the company to place products across the region within the required time efficiently. Some of the prominent players in the U.S. Acids market include:

This report forecasts revenue growth at a country level and provides an analysis of the latest industry trends in each of the sub-segments from 2017 to 2028. For the purpose of this study, Grand View Research has segmented the U.S. acids market report on the basis of type:

How big is the U.S. acids market?

What is the U.S. acids market growth?

Which segment accounted for the largest U.S. acids market share?

b. The food & beverages application dominated the market with a revenue share of over 30% in 2020. This is attributed to growing demand for functional food products in the U.S.

Who are the key players in U.S. acids market?

What are the factors driving the U.S. acids market?

b. The U.S. acids market growth is attributed to increasing demand for convenience food along with technological innovations for the production of cost-effective products in the U.S.