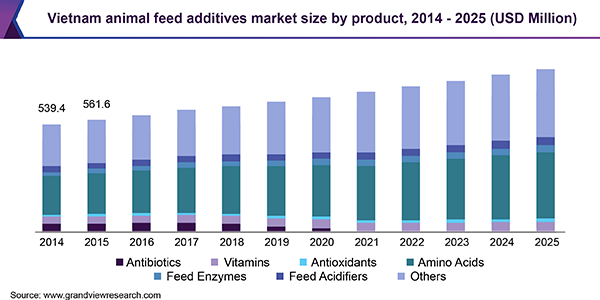 However, changing lifestyles and growing processed food industries are expected to drive meat consumption shifts towards white meat products such as poultry and fish. Changing meat consumption patterns could provide market participants with significant opportunities regarding application development over the forecast period.

Amino acids in themselves are a wide range of protein products necessary for proper animal raising. Some of the significant amino acids include lysine, methionine, threonine, and tryptophan. Lysine is predominantly used in the pork industry while methionine is extensively utilized by the poultry industry.

Amino acids emerged as the second-largest feed additive type in 2018 and accounted for 28.01% of the overall market. Rising awareness concerning to benefits of feed additives in tandem with some significant outbreak of diseases has encouraged increased utilization of additives in animal feed. Amino acids act as protein building blocks for the health of the application.

Meat consumption in Vietnam witnessed growth at 9.4% in 2009, which can be attributed to changing lifestyle and shift from traditional farming to industrial farming. Increasing meat consumption is expected to drive the demand for animal feed. According to MARD, animal feed demand was 19.7 million tons in 2010, wherein domestic manufacturing accounted for 11 million tons.

The ability of antibiotics to promote growth in livestock is one of the prominent factors that helped in developing its market in Vietnam. Increasing pork and poultry consumption coupled with concerns regarding influenza viruses affecting them have been driving animal feed antibiotics to demand in Vietnam.

Due to strict quality inspection, the market is anticipated to grow moderately. Furthermore, according to the Ministry of Agriculture and Rural Development, Vietnam will impose a ban on all types of antibiotics from 2020 in the livestock farming, thereby affecting the antibiotic market in animal feed in the country.

The primary reason for the slow growth rate in the vitamin market for feed additives is that they are only used in cases where the application is deficient, and the natural vitamins present in the feed prove insufficient. Vitamins are also additionally given to animals for improving reproductively and for increased resistance to diseases.

In 2018, the pork feed segment accounted for a major market share in the animal feed additives market. Some of the major pork-consuming regions across the globe include Asia Pacific, North America, and Europe. China, Canada, Brazil, and the U.S. are the major consumers and producers of swine animal feed. Vietnam is one of the prominent pork-consuming countries in Asia followed by China.

Vietnam’s pig herd is one of the largest in Southeast Asia. Owing to their role in agricultural production systems, their economic function, and their contribution to human nutrition, they are of great importance. Developing the pork industry in Vietnam is expected to trigger the country’s demand for animal feed additives in the future. 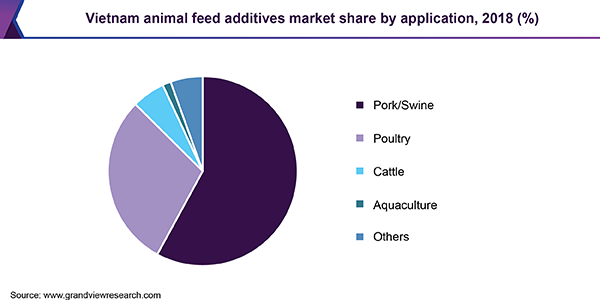 Vietnam has witnessed a huge amount of investment in its livestock industry in the past couple of years as most of the firms have their base in foreign countries but have formed joint ventures in Vietnam. Also, many of these firms are exporting poultry products that contribute to earning the required foreign currency for Vietnam. Thus, the growing poultry sector is anticipated to fuel the animal feed additives market in Vietnam.

Cattle feed is anticipated to rapidly gain market share in the country due to the high demand for exclusive beef products. It is categorized by a large number of beef imports to satisfy the demand for superior quality products. The Vietnamese animal feed sector is considered to be one of the fastest-growing sectors. However, the industry is still trying to fulfill the demand for animal feed whereas, the remaining is covered by imported feed.

Vietnam animal feed additives market is highly dominated by overseas organizations that are releasing for than 70% of the market share. Advanced technologies, tax incentives, greater capital resources, and overseas backhand support have been the competitive advantages for multinational companies to dominate the market, consequently affecting the profits of domestic producers.

Moreover, cheaper imports from China in line with the ASEAN-China Free Trade Agreement along with low taxation in the ASEAN Free Trade Area have impeded domestic production as animal farmers have shown an inclination toward the above-mentioned importing trends. Though production volumes have slightly increased, decline, in terms of value, can be largely attributed to cheaper production costs that are beneficial to multinational corporations.

This report forecasts revenue growth at global, regional & country levels and provides an analysis of the industry trends in each of the sub-segments from 2014 to 2025. For this study, Grand View Research has segmented the Vietnam Animal Feed Additives market report based on product and application:

What are the factors driving the vietnam animal feed additives market?

b. Key factors that are driving the Vietnam animal feed additives market growth include increasing meat consumption and growing demand for amino acids in swine and poultry feed.

How big is the vietnam animal feed additives market?

b. The global Vietnam animal feed additives market size was estimated at USD 655.1 million in 2019 and is expected to reach USD 679 million in 2020.

What is the vietnam animal feed additives market growth?

b. The pork segment dominated the Vietnam animal feed additives market with a share of 57.8% in 2019. This is attributable to the increasing demand for pork meat in countries such as China, U.S., and Germany.

Who are the key players in vietnam animal feed additives market?