The global Wireless Gigabit (WiGig) market size was estimated at USD 702.2 million in 2015. The transition from enterprise-driven to cloud-dominated technologies is driving the WiGig market. Data center and Ethernet switches are widely used in cloud computing. The 25G Ethernet is expected to drive growth in data center switching and is expected to propel 100G Ethernet volumes, with enterprises adopting a class of switch to support 25G used in cloud. 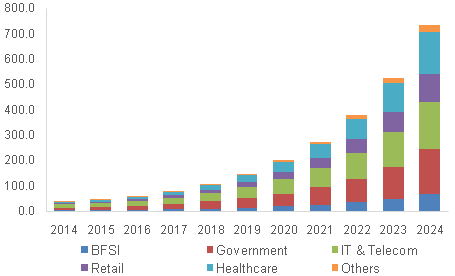 The shift toward BYOD is boosting companies to increase their allocation of IT budgets for improving network throughput. Owing to the increased usage of mobile and other electronic devices at work, there is an increased dependency on having a high bandwidth and speed to support various applications and services. The BYOD trend is leading to more wireless endpoints, resulting in a high demand for network switch upgrades. Several manufacturers are developing advanced network switches that can handle an increased speed. Moreover, with the increasing demand for high speed, several companies are developing technologies to efficiently manage such high-speed data.

The growing demand for gigabit IP data is driving the adoption of wireless broadband access. Moreover, in high data density regions, gigabit IP data connectivity is essential for LTE deployments and metro Wi-Fi. The 60 GHz band is suitable for such applications owing to the distinctive propagation characteristics of the band and the large bandwidth obtainable that allow high spectrum reuse, which is crucial for the next-generation wireless network architectures.

The 802.11ad type observed as a lucrative market segment

The 802.11ac segment dominated the wireless gigabit market in 2015, which is expected to grow at a significant CAGR of over 30% from 2016 to 2024. The segment is witnessing a high growth in the industry owing to the increased throughput at frequencies under 2.4 GHz to 5 GHz bands. However, with the rapidly evolving wireless technology in response to the outburst of intelligent devices, data, and applications, the IEEE 802.11ad standard is poised to grow at a significantly high rate with a CAGR of nearly 35% over the future. The 802.11ad standard provides higher data throughput and lower latency solutions by operating in the 60GHz millimeter wave band.

Consumer electronics to capture a considerable share in the industry

The consumer electronics segment is estimated to dominate the industry with a major share of over 67% in 2015 and the trend is estimated to continue in future, owing to the increasing consumer adoption of 802.11ac access points. WiGig offers consumers ultra-fast connectivity that is required to transfer gigabytes of HD content between tablets, smartphones, computers, and set-top boxes. Several IC manufacturers in the industry are targeting consumer electronics devices, including laptops, mobile phones, tablets, TVs, monitors, and Wi-Fi access points, by developing advanced WiGig ICs for the segment.

The SMBs and residential segments to grow significantly in the industry

Large enterprises dominated the industry with a revenue share of nearly 44% in 2015. Large enterprises, including the government and commercial sector, are increasingly adopting WiGig solutions on a large scale, owing to the rising demand for the high-speed Internet and bandwidth requirements across the segment.

However, the SMBs end-use segment is anticipated to witness a high growth at a CAGR of nearly 32% over the forecast period. A rise in the adoption of the BYOD and IoT trends across the segment has led to an increase in the demand for the WiGig technology. Since most of the devices are Wi-Fi enabled, the technology is expected to witness a high adoption in businesses, including healthcare, hospitality, and education, that are under persistent pressure to deliver a secure, fast, and feature-rich Internet experience to all of their customers and employees.

The healthcare application segment to drive the industry demand

The healthcare segment is anticipated to grow at a significant CAGR of over 35% from 2016 to 2024, owing to the increasing demand for more bandwidth on a reliable wireless network. In the healthcare industry, Wi-Fi is increasingly used for mission-critical applications including cardiac and radiology imaging, telemedicine, electronic medical record procedures, handheld scanners, and voice over IP. In order to ensure that such applications run efficiently and securely, the healthcare industry requires high-performing, high-capacity, and pervasive wireless connectivity, hence driving the industry growth.

The Asia Pacific WiGig industry is expected to drive demand

Asia Pacific dominated the industry with a significant revenue share of over 45% in 2015 and the trend is expected to continue over the forecast period. The growing production of Ethernet switches and routers in robust economies, such as India, China, and Japan, is contributing to the regional growth. The rising IT spending and changing budget allocations in developing countries are attracting demand for technologically advanced products to upgrade the existing enterprise infrastructure.

Qualcomm, Broadcom, and Cisco are amongst the key shareholders

The key industry players in the WiGig industry include Qualcomm, Intel Corporation, Broadcom Corporation, Marvell Technology Group Ltd., Panasonic Corporation, Cisco Systems, Inc., NEC Corporation, Azurewave Technologies, Inc., Nvidia Corporation, and MediaTek. These players are focusing on transitioning toward 802.11ad from 802.11ac to support more users, which means more devices operating on the network. One of the key factors driving this adoption is the availability of the Multiple Input Multiple Output (MIMO) option.

How big is the wireless gigabit market?

What is the wireless gigabit market growth?

Which segment accounted for the largest wireless gigabit market share?

b. The Asia Pacific dominated the wireless gigabit market with a share of 53.3% in 2019. This is attributable to the growing production of Ethernet switches and routers in robust economies, such as India, China, and Japan.

Who are the key players in wireless gigabit market?

What are the factors driving the wireless gigabit market?

b. Key factors that are driving the market growth include the increasing requirement for improved internet connectivity, high penetration of smartphones, and use of multiple devices, and the rising demand for wireless videos and data.