1-Decene is stored under a nitrogen blanket and is not corrosive to steel or aluminum. It should be avoided from the contact of air or oxygen because alpha olefins are sensitive to moisture. Alpha olefins should be handled under a dry, inert gas atmosphere otherwise it can form explosive mixtures with air or oxygen in certain concentrations.

Currently, most linear alpha olefins, and thus 1-decene, are commercially produced by ethylene oligomerization. Products of oligomerization process consist of even-numbered carbon chains ranging from C4 to C30+. 1-Decene is obtained only through the linear distribution of alpha olefins obtained. On purpose production process for C-10 has not been yet developed.

There are three main processes currently in use-Zeigler Process (CPChem), Modified Ziegler Process (INEOS Oligomers), and SHOP (Shell Chemicals). The CPChem route uses a single stage for AO production, but is the least flexible of these processes in product distribution. The Modified Zeigler process, which uses two separate steps, gives greater flexibility in product distribution at the expense of increased process complexity. Shell’s process is the most complex process of these three routes. The SHOP (Shell Higher Olefins Process) is the most flexible regarding product distribution.

Ethylene is an essential feedstock used in alpha olefin, and thus in 1-decene production, and is majorly obtained from naphtha and gas-based oil wells across the globe. Ethylene finds various application across various industrial reactions such as hydroformylation, hydration, alkylation, hydrogenation, halogenations, oligomerization, and polymerization. Major products derived from ethylene include polyethylene, ethylbenzene, ethylene dichloride, and ethylene oxide.

Ethylene prices are expected to increase linearly over the forecast period. Around 13 million tons per year cracker capacity is estimated to come online by 2020; however, much of this depends on ethylene prices and other economic conditions across the globe. By 2025, ethylene is likely to be oversupplied, which is can put cracker facilities in Europe and Asia under cost pressure.

All these factors have resulted in increased efforts towards alpha olefin production from renewable sources. However, high cost of catalysts is the challenge to the feasibility of the production process. Although bio based production is under research and development, the procedure is likely to gain momentum in upcoming years. 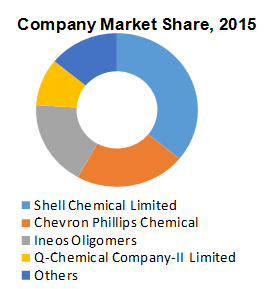 Key market players are concentrated within the U.S. and the Middle East due to an easy and ample availability of ethylene in these regions. Major companies are actively involved in capacity augmentation and expansion to strengthen their market presence.

The emergence of various alpha olefin producers in Asia Pacific region such as Idemitsu Petrochemical, Sinopec Beijing Yanhua, and ONGC is expected to increase competitiveness among market participants. Major companies are expanding their capacities in Asia Pacific in to cater to the growing regional demand.

The ability of main market players to optimize the production process based on market scenario will play a key role in diversifying the product portfolio and thus maximize the profits.