The global dairy alternatives market size was estimated at USD 11.90 billion in 2017. Rising consumer focus on nutritional values such as low calories and high proteins and vitamins offered by milk substitutes or dairy analogs is likely to have a positive impact on the market.

Soymilk contains various minerals such as iron, calcium, phosphorous, zinc, sodium, potassium, and magnesium. The product is highly popular among heart patients as it reduces cholesterol levels. In addition, soy milk contains an equal amount of proteins as that in cow milk and is low in calories compared to the whole and skim milk. Therefore, the growing consumption of soy milk is likely to augment overall industry demand. 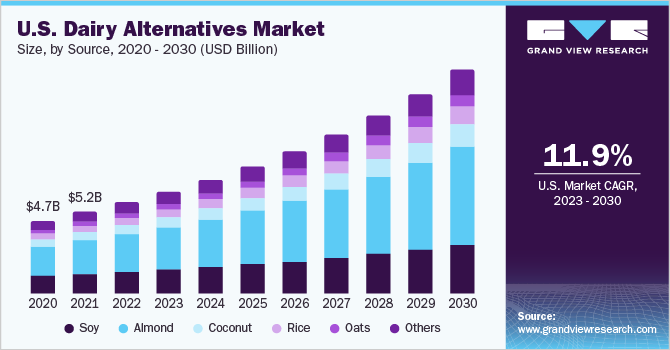 Preliminary research on company performance in dairy alternatives showed that returns on soy, rice, and almond milk were approximately 6% higher than those on conventional milk and milk products, which has captured the attention of start-ups and food companies. Dairies in Europe are rapidly becoming leaders in the market, especially in Western Europe.

The global industry is expected to grow at a significant rate owing to rising consumer demand for plant-derived nutritional dairy goods. Increasing consumer awareness regarding health, along with improving disposable income in countries such as Brazil, India, China, and Japan, is anticipated to spur consumption of soy milk, almond milk, coconut milk, and rice milk over the forecast period.

Consumers have shown a growing preference for vegan diet owing to increasing concern over animal rights and environmental protection. This is anticipated to drive the industry over the forecast period. In addition, government policies to improve the agricultural sector are likely to increase raw material availability and lower their prices, which will also have a positive impact on market growth.

Fluctuation in raw material supply is projected to be a key concern for market growth. Raw materials used in manufacturing milk substitutes are edible nuts and cereals, and the majority of their production volume is used for direct consumption. As a result, the availability of raw materials is likely to be a key factor influencing the industry.

However, initiatives are undertaken by manufacturers to offer novel flavors, better quality, and attractive packaging are likely to have a positive impact on the industry over the forecast period. These products can be fortified with vitamin D, calcium, and DHA, which improve their nutritional values. Increasing consumer knowledge about milk analogs is anticipated to fuel market growth.

Soy milk accounted for the largest share by-product in 2017, holding around 58.0% of the global demand. Soy milk is rich in vitamins, potassium, and protein and has lower calorie content than cow’s milk, which is expected to have a positive impact on segment growth. However, the product is facing strong competition from other non-dairy goods, especially almond milk.

Increasing consumption of rice milk for manufacturing snacks and baking goods is projected to have a positive impact on market growth. Rice milk is the least allergic dairy substitute and has witnessed high demand from consumers with milk and nut allergies. Rice milk cheese and cream can be fortified with vitamin D and calcium, which is anticipated to further propel its consumption over the forecast period.

Almond milk is highly preferred by people suffering from obesity and overweight. It is low in calories as compared to cow’s milk and is helpful in weight management. Unlike cow milk, the product suppresses the growth of breast and prostate cancer cells. As a result, the segment is likely to gain prominence as a daily dietary supplement over the forecast period.

On the basis of formulation, the dairy alternatives market can be segmented into plain and flavored. The plain formulation was the dominant segment in the past few years in terms of both volume and revenue. Increasing demand for plain variants of dairy alternatives such as soymilk, almond milk, rice milk, and others is anticipated to contribute to segment growth.

Companies such as Hain Celestial Group, Inc. and WhiteWave Foods Company have come up with plain and unsweetened formulations of soymilk, almond milk, rice milk, and coconut milk to attract consumers above the age of 40. Increasing preference for these low-calorie products is projected to drive the industry over the forecast period.

Increasing consumption of flavored and unsweetened milk substitutes with low-calorie content is expected to augment market growth over the forecast period. Factors such as increasing the popularity of plant-based nutritional goods, coupled with rising consumer demand for cholesterol-free products, are likely to spur the growth of flavored and unsweetened formulations.

On the basis of application, the industry can be segmented into food and beverages. The beverages segment held around 58.0% of the global market in terms of revenue in 2017. Growing consumer preference for vegan diet due to concerns about ethical animal rights and environmental protection is likely to drive segment growth. 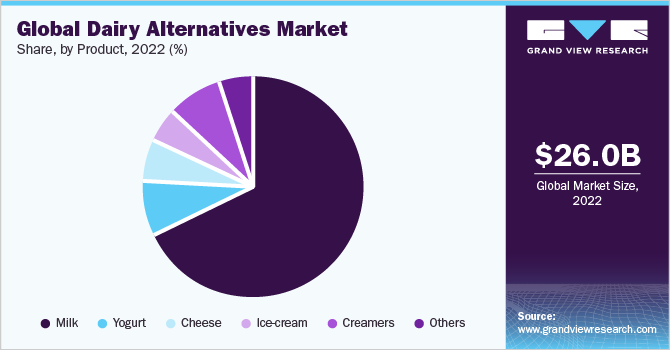 Dairy alternatives-based beverages are widely distributed through supermarkets, pharmacies, convenience stores, health food stores, and e-retailers. These beverages are available in various formulations such as plain, flavored, fortified, unsweetened, and sweetened. Increasing consumer awareness and rising health concerns are anticipated to fuel the market over the forecast period.

In the food industry, rising demand for snack products such as soy, coconut, and nut-based yogurts and smoothies, and spreads such as dairy-free butter and margarine is likely to propel the growth of dairy alternatives snacks over the forecast period. In addition, increasing the availability of flavored yogurt in emerging countries like India, China, and Brazil is expected to propel market growth.

In terms of region, Asia Pacific accounted for the largest share in 2017. Expanding population and rising disposable incomes in emerging countries such as India and China are expected to augment product demand in the region.

Soy, rice, and almond milk are significantly consumed as traditional beverages in Asia Pacific. The regional market is characterized by demand for lactose-free milk for children, lactating mothers, and pregnant women. These dairy alternatives offer a wide range of application in lactose-free products for adults, thereby improving market prospects in Asia Pacific.

North America is the second-largest market for dairy alternatives and is anticipated to account for a significant share over the forecast period as a result of increasing demand for novel plant-derived goods. Rising cases of lactose intolerance in the region are expected to augment demand for non-dairy products such as soymilk and almond milk.

The global market is marked by the presence of various global and regional players. The industry is highly fragmented and companies aggressively commercialize their products, thereby increasing the intensity of competition. Moreover, low alternating costs make it less difficult for consumers to shift to other manufacturers. The rivalry is automatically increased when firms compete for the same customers.

Manufacturers are focusing on product innovation with respect to dairy alternatives. Furthermore, the growing population in emerging countries and increasing disposable income has provided manufacturers with an opportunity to develop the segment in the upcoming years. Several marketing innovations and strategies have contributed to market growth in emerging regions.

This report forecasts revenue growth at global, regional, and country levels and provides an analysis of latest industry trends in each of the sub-segments from 2014 to 2025. For the purpose of this study, Grand View Research has segmented the global dairy alternatives market report on the basis of product, formulation, application, and region:

How big is the dairy alternatives market?

What is the dairy alternatives market growth?

Which segment accounted for the largest dairy alternatives market share?

b. Asia Pacific dominated the dairy alternatives market with a share of 53.2% in 2019. This is attributable to soy, rice, and almond milk being significantly consumed as traditional beverages in Asia Pacific. The regional market is characterized by demand for lactose-free milk for children, lactating mothers, and pregnant women.

Who are the key players in dairy alternatives market?

What are the factors driving the dairy alternatives market?

b. Key factors that are driving the dairy alternatives market growth include rising consumer focus on nutritional values such as low calories and high proteins and vitamins offered by milk substitutes or dairy analogs.