The global glycerol market size was valued at USD 2.4 billion in 2020 and is expected to expand at a compound annual growth rate (CAGR) of 6.4% in terms of revenue from 2021 to 2027. This is attributed to its increasing demand from food, pharmaceutical, and nutraceutical industries. The product is widely being used in several food products including processed meat, condensed milk, and bakery products.

There is a rise in the consumer preference for glycerol as it is non-toxic and has excellent nutritive values attached to it. It can be derived naturally as well as from petrochemical feedstock. The demand for the product is likely to augment globally in the coming years as it is easy to store, and does not harm the environment. Moreover, it is widely used for improving hydration levels and performance levels in athletes, skin conditions, and helps relieve constipation as well. These factors are likely to positively affect the growth of the market for glycerol over the forecast period. 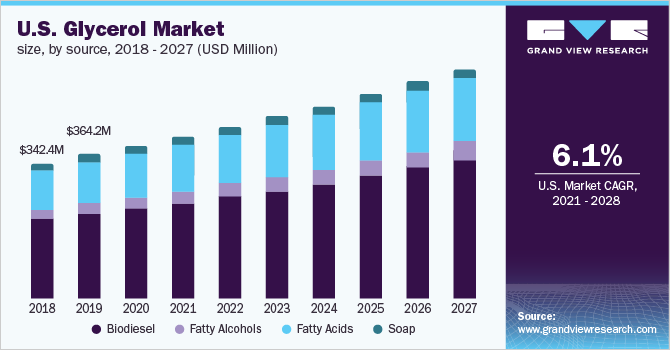 Glycerol is available in two forms in the market - crude form and refined form. The crude form is obtained from the production of biodiesel, which is in its raw form and then sold to large refineries for further processing. It acts as an outstanding source of calories for non-ruminants such as swine, hens, and broilers. The refined form of the product is hygroscope in nature and is used in different applications such as pharmaceuticals, polyether polyols, food and beverages, and alkyd resins.

Glycerol is formed via hydrolysis reaction, saponification, and transesterification during biodiesel production. The substance that is produced has various impurities in it such as remaining wastewater, soaps, salts, esters, and catalysts. It is converted/purified into valuable products during the manufacturing process of biodiesel. Glycerol is manufactured by the hydrolysis of fats and natural oils from animals and plants. The synthesis of the product in yeasts and other organisms takes place through dephosphorylation of glycerol 3 phosphates.

The prices of raw materials play a crucial role in the market for glycerol. Other costs that come into play apart from those of raw materials include pre-operational costs, capital investments, and working capital. Also, pre-operating costs include installation, setup, capitalized interests, project engineering and management, and commissioning costs. Increasing prices of fossil fuels have led to a rise in the prices of biodiesel, thus triggering the prices at a global level.

Biodiesel was the dominating source segment in the market for glycerol in 2020 and accounted for the largest revenue share of 59.5%. The segment is anticipated to witness a CAGR of 6.3% in the coming years. This is attributed to its usage as a by-product in the production of biodiesel fuels by chemical and enzymatic methods and the production of bioethanol. Biodiesel is one of the most preferred sources of glycerol due to its low cost, as a result of increasing production of biodiesels as replacements for conventional diesel on the account of its biodegradable, renewable, and non-toxic properties and lesser emission attributes.

The soap segment accounted for more than 10.0% of the revenue share in 2020. This is attributed to increasing demand for soaps mainly in the personal care application, as it imparts moisture to the skin, which is anticipated to positively impact market growth over the forecast period.

The fatty alcohols segment is predicted to witness the highest CAGR in the forecast period. This is attributed to its wide usage in the manufacturing of surfactants and detergents. Also, they are used as industrial solvents and as components in the cosmetics, and food and beverage industries. The growing demand for fatty alcohol in the aforementioned industries is likely to trigger product demand and thus, is expected to boost market growth for glycerol over the forecast period.

The refined segment dominated the market for glycerol and accounted for the largest revenue share of 75.0% in 2020. Refined glycerin is a colorless, odorless, water-soluble, viscous liquid with a high boiling point. This is attributed to its emulsifying and moisturizing functionalities which make it an effective additive in various personal care and home care formulations. These factors are attributed to boosting the demand for the product in the coming years.

Refined glycerol is generated through laboratory-controlled hydrolysis, transesterification, and saponification processes. It is derived from several kinds of vegetable oils. Further refining of crude glycerol depends on the economics and the availability of production facilities in a particular region.

The crude segment is predicted to witness a CAGR of 5.9% in the predicted years. Crude glycerol mostly contains impurities such as free fatty acids and methanol, making it a less preferred product in the market for glycerol. The rising demand for crude glycerol in personal care and nutraceuticals applications is expected to positively impact the market growth over the projected years.

The personal care and cosmetics segment dominated the market for glycerol and accounted for the largest revenue share of 40.8% in 2020. This is attributed to an increase in demand for personal care and pharmaceutical products as a result of improving lifestyle, coupled with increasing health awareness among the population in emerging economies across the Asia Pacific and Latin America. Glycerol is used as a means of improving smoothness, providing lubrication, and as a humectant. It is found in skincare products, shaving cream, hair care products, soaps, and water-based personal lubricants.

The pharmaceutical segment is projected to witness the most significant CAGR in the forecast period. This is attributed to the usage of the product in pharmaceuticals owing to its nutritive value and healing properties. Additionally, it is found in toothpaste, mouthwashes, expectorants, elixirs, cough syrups, and allergen immunotherapy among others. A significant rise in the demand for glycerol for various purposes in pharmaceutical applications is expected to positively impact the demand for the product in the coming years. 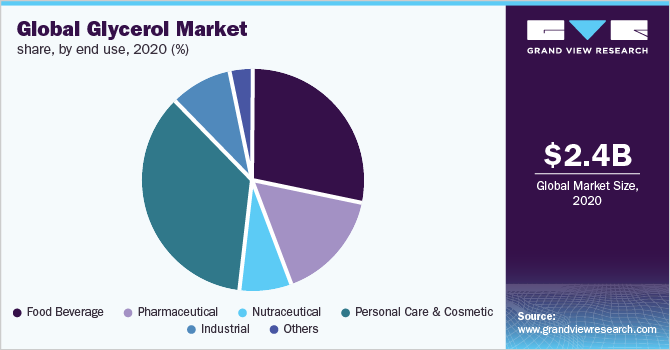 Other applications of the product include food preservatives, tobacco, and the production of perfumes and explosives. In perfumes, the substance is used as a fixative to retain the scent of the perfume for longer periods. When added to water and alcohols in perfumes, it helps other ingredients dissolve at a faster rate. Glycerol is turned into nitroglycerin by reaction with nitric acid and sulfuric acid, which is an explosive and hence used in dynamites. It is also used in anti-freeze, lubrication, and printing inks.

Asia Pacific dominated the glycerol market and accounted for the largest revenue share of 36.0% in 2020. The region is predicted to witness the highest CAGR of 6.9% in the coming years. This is attributed to changing lifestyle patterns, growing consumption of convenience foods, and the rising number of working women in the region. Prices of glycerol in the Asia Pacific increased multi-fold in the first half of 2021 owing to high demand from end-use industries and constrained production amid a shortage of key feedstock chemicals. The volume of glycerin production was reduced in Indonesia due to limited feedstock availability.

Europe was the second-largest regional market in 2020 and accounted for around 30.0% of the revenue share. This is attributed to the large investments by major players in the cosmetics industry, growing consumer expenditure, and the launch of new and innovative products in the personal care segment. Germany, Netherlands, Italy, and France are the leading producers of the product in Europe. European countries have potential demand for biofuels. Thus, biodiesel production is likely to be high in the coming years, which in turn will have a positive impact on the market.

Brazil and Argentina are the two major producers of glycerol in Central and South America (CSA). The quantity of glycerol sold by Brazil was 328,421 metric tons in 2020. The country ranks 61st in substance exports globally. Argentina is one of the world’s biggest biodiesel producers with an installed capacity of 4.5 million mt/year.

The market is highly competitive in nature due to the presence of a large number of multinationals that are engaged in constant research and development activities. Companies such as BASF SE, Procter & Gamble, Cargill, Dow, and Wilmar International dominate the market with a range of products for each application market and their global brand presence. A majority of these companies have integrated their business operations across the value chain to incur maximum profit at the lowest investment.

The global companies are also focusing on capacity expansions, signing partnership agreements with distributors, and various other operational strategies to gain an edge in the competitive market space. For instance, companies such as BASF SE have opened a new food application and development center in Johannesburg, South Africa to help the company focus on value-added customized developments related to glycerol with improved service quality. Some of the prominent players in the glycerol market include:

This report forecasts revenue growth at global, regional, and country levels and provides an analysis of the latest industry trends in each of the sub-segments from 2016 to 2027. For the purpose of this study, Grand View Research has segmented the global glycerol market report on the basis of source, type, end-use, region:

How big is the glycerol market?

What is the glycerol market growth?

Which segment accounted for the largest glycerol market share?

Who are the key players in the glycerol market?

b. Some key players operating in the glycerol market include BASF SE, Dow , Cargill, Incorporated, Kao Corporation and Oleon NV.

What are the factors driving the glycerol market?

b. Key factors that are driving the glycerol market growth include increasing adoption in the mainstream application of biofuels and increased demand for oleochemicals.