The global gum arabic market size was valued at USD 373.1 million in 2018 and is estimated to expand at a CAGR of 5.9% over the forecast period. Gum arabic, also known as acacia gum, is a natural emulsifier used in various applications such as food and beverage, cosmetics, pharmaceuticals, and paints. It is primarily used as a filling and thickening agent in most confectionery items.

Acacia is a source of dietary fiber, which suppresses appetite, thereby preventing over-eating or eating frequently. This ultimately aids in weight loss. Research shows that consuming 30 grams of acacia in powdered form every day can help in reducing weight. It is also known to help prevent irritable bowel syndrome. The ingredient removes toxins from the body and at the same time, acts as a prebiotic that aids in gut health. It also relieves diarrhea and constipation and reduces inflammation of the gut. Being highly soluble in water, this fiber is easy to consume. It can also be applied to the skin to reduce skin inflammation and treat fungal and bacterial infections of the skin as well as the mouth. 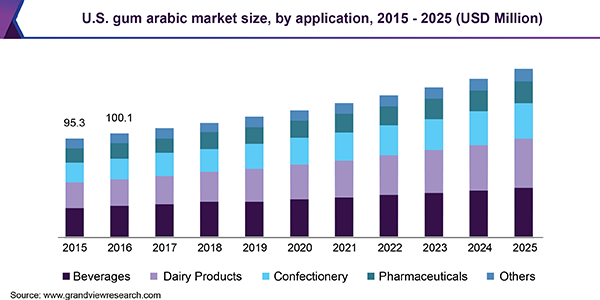 The global market is driven by increasing consumer spending on dietary and fiber-rich food products, especially in bakery applications. This can be attributed to the growing purchasing power of consumers, along with significant spending in the beverage and confectionery industry in developing countries such as China and India. Rapidly growing bakery industry in several Asian and South American countries and with a rise in sales of natural and functional ingredients used in bakery products are key trends benefiting this market.

The beverages application accounted for the largest share of 32.2% in the global market in 2018. Gum arabic has several value-added benefits over gelatin, starch, and other additives used in drinks as it has proven to be a better stabilizing and emulsifying agent. Beverage manufacturers and makers of edible flavors, syrups, and concentrates have been increasingly using gum arabic as a functional ingredient in soft drinks, smoothies, fruit-flavored water and beverages, and various soft-alcoholic drinks.

In terms of revenue, dairy products are expected to emerge as the fastest-growing application segment, registering a CAGR of 7.4% over the forecast period. The ingredient plays a crucial role in dairy products as an encapsulation medium and stabilizer. Its air-holding ability improves freeze-thaw stability in ice creams, yogurts, and other frozen desserts. Thriving e-commerce channels and an increasing number of domestic vendors have been providing players major growth opportunities.

Based on source, acacia Senegal dominated the global gum arabic market in 2018 and a revenue-based share of 66.2% that year. The tree is native to Sudan, Africa, and parts of eastern India. Acacia Senegal trees are known to yield in all types of seasons, regardless of climatic conditions and soil texture. They are drought-tolerant, which makes them suitable to grow in the drier parts of the world. These trees yield the largest amount of superior quality gum acacia when they are unhealthy. So much so, that improving culture methods have been known to diminish the yield. Key applications of this form of gum include medicine and essential oil, as timber and fuelwood, as a soil improver, for intercropping, and as an ornamental tree in some parts of the world. 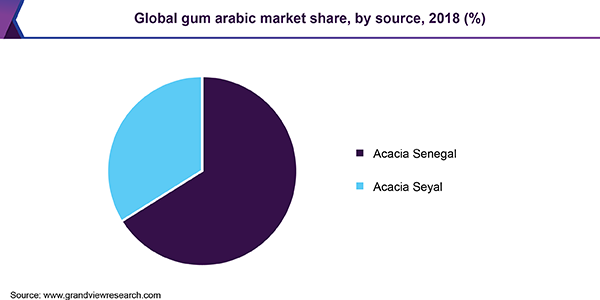 Acacia seyal is projected to emerge as the fastest-growing segment by source, registering a CAGR of 7.2% over the forecast period. This tree is mainly found in several parts of Africa and is characteristic of the Nile region. The variant is tolerant to salts, high pH, and periodic flooding and has a higher average molecular mass of gum compared to that of acacia Senegal. These trees produce gum that is much darker than those produced by the Senegal variants and the gum possesses inferior functional properties. However, despite acacia, Senegal being the primary choice to produce superior quality gum arabic, acacia seyal is fast gaining prominence as it is relatively cheaper.

The market in North America held the dominant share of over 35.0% in terms of revenue in 2018. This can be attributed to a large consumer base, especially for beverages, confectioneries, and pharmaceutical products. Gum arabic is one of the most important emulsifiers used in the manufacturing of syrups for soft drinks. Therefore, a thriving food and beverage industry in the region has benefited market growth. For instance, the soft drinks market in the U.S. is anticipated to register a CAGR of 5.1% from 2018 to 2025. A well-established pharmaceutical sector also aids regional growth. The ingredient finds application in numerous pharmaceutical formulations and as a result, demand for the same is likely to remain steady over the coming years.

Asia Pacific is the fastest growing regional market and is expected to exhibit a CAGR of 8.2% over the forecast period. Soaring sales of dairy products, particularly in countries like Japan, China, Australia, and India have been driving the market. Another factor aiding the growth of the regional market is leading confectionery manufacturers expanding their geographical reach across countries in Southeast Asia. The ingredient is used as a filling and thickening agent in most confectionery and bakery items and therefore, any growth in this industry has a positive impact on product demand.

This report forecasts revenue growth at global, regional, and country levels and provides an analysis of the latest industry trends in each of the sub-segments from 2015 to 2025. For this study, Grand View Research has segmented the global gum arabic market report based on application, source, and region: