The global magnetic sensor market size was valued at USD 2.0 billion in 2018, while demand was estimated at 3,398.3 million units that year. The market is projected to register a revenue-based CAGR of 6.8% from 2019 to 2025. Increased integration of magnetic sensors in various industry verticals, backed by significant technological advancements in sensing techniques, is expected to boost market growth.

Government mandates necessitating the integration of magnetic sensors in automobiles are expected to impact the market growth favorably. Magnetic sensors constitute a vital part of navigation systems used in cars and smartphones, as a result of which, their demand is expected to remain buoyant in these two sectors. 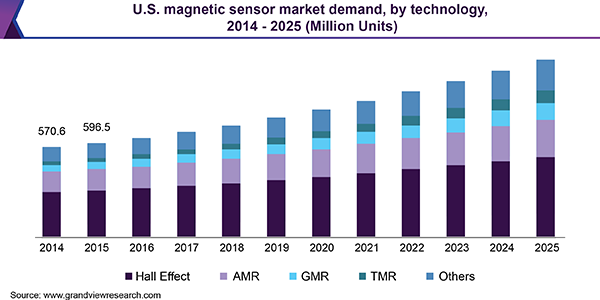 On account of growing demand for magnetic sensors in the automotive sector, the market is estimated to exhibit a healthy growth rate throughout the forecast period. Sensor manufacturers have stressed on providing efficient devices that can be integrated across a plethora of applications. These devices assist in contactless operations and wear-free measurements of angular speed and angle of rotation. Aggressive investment in R&D activities for development of advanced sensory components is also another strategy adopted by manufacturers. They aim to develop sensors incorporated with features such as motion detection, speed, and proximity in order to cater to the needs of diverse end-use verticals.

Magnetic sensors form the building blocks of electronic control systems in commercial as well as passenger vehicles. These systems ensure increased safety and enhance driver convenience, as a result of which, their adoption has witnessed a surge. Such advanced sensing elements guarantee high reliability and efficiency in terms of economics and performance.

High penetration of sophisticated, feature-rich smartphones and tablets has necessitated the need for advanced sensing components, a trend that is expected to favorably impact the market over the next few years. Magnetic sensors have also been extensively used in the field of Non-destructive Testing (NDT) and medical R&D.

The average selling prices (ASP) of magnetic sensors are declining steadily, which is attributed to intense competition in the market. As a result, manufacturers are forced to shrink their margins in order to secure long-term deals with companies across several end-markets. While such a reduction in ASPs is anticipated to continue, growing application ranges of magnetic sensors are expected to aid the market over the next few years.

Based on technology, the market is segmented into Anisotropic Magneto-Resistive (AMR), Tunnel Magnetoresistance (TMR), Hall Effect, Giant Magneto-Resistance (GMR), and others. Among these technologies, the Hall Effect segment accounted for a sizeable revenue share and was valued at close to USD 640.0 million in 2018; the segment is projected to maintain its dominance throughout the forecast period. This can be attributed to the fact that they are easy to implement, are compact in design, and offer varied output options and operating voltages.

The TMR segment is projected to exhibit the highest volume-based CAGR of more than 14.5% over the forecast period. TMR sensors have a wide range of industrial applications, including bio-sensing and Magnetoresistive Random-Access Memory (MRAM). The technology is gaining popularity owing to its ability to offer high output and sensitivity, along with sensing capabilities akin to Wheel Speed Sensors (WSS) used in Anti-lock Braking Systems (ABS). AMR sensors are also anticipated to become popular over the forecast period owing to their inherent features such as greater magnetoresistance, lower price, and high flexibility.

The automotive sector is expected to emerge as the highest demand generating segment over the forecast period. Approximately 1.5 million magnetic sensors were utilized in various automotive applications in 2018. The segment also accounted for the dominant revenue share in the magnetic sensor market that year. Key regulatory bodies all over the world are shaping the growth of the segment by stressing on the adoption of electric and hybrid cars in order to address growing concerns regarding environment pollution. 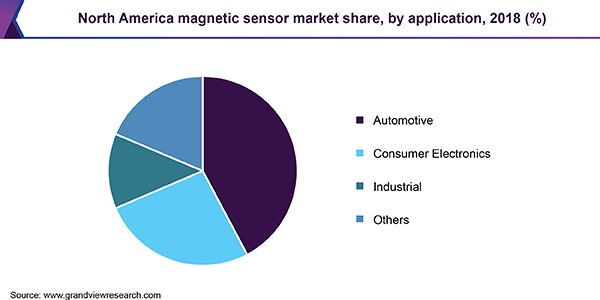 Increased incorporation of magnetic sensors in consumer electronics is expected to positively impact market growth. These sensors form integral parts of devices such as tablets, smartphones, scanners, printers, laptops, flat panels, and cameras. They are also embedded in gaming controllers and other smart products.

Use of robots in factory automation has gained a lot of prominence in recent years. Factory automation solutions necessitate linear as well as angular position sensing for carrying out motor movements with a higher degree of accuracy, repeatability, and precision. To address the growing need for enhancing the efficiency of production lines, magnetic sensors are being increasingly used for angular and linear sensing, safety switches, and proximity detection.

Asia Pacific led the market in terms of revenue as well as volume in 2018, which is attributed to prospering automotive and consumer electronics manufacturing industries in the region, as well as the presence of prominent sensor manufacturers in China and Japan. Increased demand for automobiles and high-tech smartphones has augmented the demand for magnetic sensors in the region.

Connected cars have gained considerable prominence in North America as customer buying behavior has started to hinge on communication capabilities offered by various car manufacturers. Miniature magnetic sensors assist in imparting such capabilities, while keeping basic functionalities of the car intact. Sensing components in various use cases such as position sensing, flow rate detection, and speed sensing are also gaining traction in the region.

The Europe market was valued at over USD 420.0 million in 2018 and is projected to maintain a steady growth rate over the forecast period. Hybrid cars, which are integrated with Hall Effect current sensing in the power systems, are witnessing increased adoption in Europe, which has greatly aided market growth.

This report forecasts revenue growth at global, regional, and country levels and provides an analysis of the latest industry trends in each of the sub-segments from 2014 to 2025. For the purpose of this study, Grand View Research has segmented the global magnetic sensor market report on the basis of technology, application, and region: