The global sports composites market size was valued at USD 2.60 billion in 2015. Growing demand for durable materials in the production of rackets, skis, and hoverboards is expected to drive growth over the forecast period. In addition, growing expenditure towards the development of new products that increase the strength and drive in hockey sticks and golf clubs, by reducing the overall weight is expected to bolster carbon composites demand. Furthermore, increasing use of carbon fiber in the form of prepreg and textile in various sports applications is estimated to augment demand.

The composite materials used for manufacturing sports equipment are segmented on the basis of technology used for the production of the carbon fiber. Increasing use of continuous processing technique used in manufacturing glass reinforced plastics (GRP) is expected to result in increased production of equipment such as skis, snowboards, and longboards. 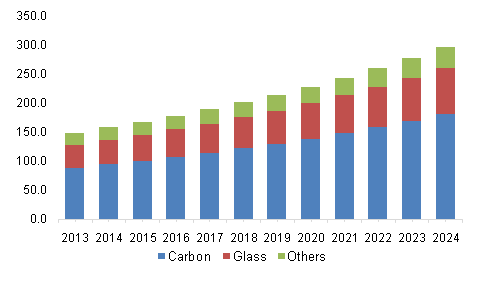 The global carbon fiber market is highly concentrated, with four players accounting for more than 53.0% of the production of carbon fiber in 2015. Carbon fiber composites are extensively used in the production of sports composite materials. The sports composites market is characterized by a high degree of forward integration with some major manufacturers such as Fischer Sports and Rossignol acting as distributors for their products.

The market is segmented by material into glass and carbon. Carbon fiber accounts for the majority of the market share owing to increasing use of the fiber in golf clubs, bicycle frames, and rackets. Easy raw material availability coupled with advanced manufacturing techniques used in the production of carbon composite is expected to drive growth over the forecast period.

The increasing use of glass fiber composites in skis, snowboards, and longboards owing to better performance is expected to drive the market growth over the forecast period. Glass fibers are widely used in manufacturing skis & snowboards owing to its ability to improve sliding properties as well as providing additional strength during landing.

The market is segmented by resin into the epoxy, polyamide, polyurethane, and polypropylene. The polyamide resin segment is expected to witness high growth rate owing to increasing demand for hockey sticks. Furthermore, properties characteristics of polyamide including improved energy transfer are expected to propel demand over the next eight years. Polyamide resin is used as a reinforcement material in the blade of the hockey stick as it protects the blade from damage by high impact collisions, keeping the weight of the stick at a minimum.

Polyurethane resin segment accounted over 15.0% of the overall volume share in 2015. The increasing use of the resin in reinforcing equipment such as polo sticks and hockey sticks owing to improved strength and durability is expected to drive demand. Furthermore, increasing use of the resin in court floors imparts more strength to the floor and provides for easier cleaning and maintenance of the floor. The increasing use of artificial turf for sports such as hockey, American football, and rugby is expected to drive the demand for polyethylene resins over the forecast period.

The industry is segmented by application into golf clubs, hockey sticks, rackets, bicycles, and skis & snowboards. The bicycle segment is expected to witness high growth over the forecast period owing to increasing demand for lightweight bicycles in competitive sports as well as recreation activities. Also, significant weight reduction improves bike control due to the use of carbon composites in the bicycle frames. Furthermore, the increasing demand for carbon-reinforced bicycle frames due to a decrease in cost is expected to drive the demand over the forecast period.

The increasing use of glass-reinforced plastics as a protective layer in skis and snowboards results in better control of the boards by the players. In addition, the use of glass composites in skis results in better geometry, lower equipment cost, and lower instances of bond failures which are expected to drive the market growth over the forecast period.

North America accounted for over 35.0% of the revenue share in 2015 owing to high technological advancement leading to increasing use of composites for various sports equipment such as polo sticks and lacrosse sticks. Growing demand for artificial turf for American football, basketball courts, and golf is expected to drive growth over the forecast period.

Europe demand for sports composites was valued at over USD 900 million in 2015. The region is driven by the presence of a large number of sports composites manufacturers, thus increasing the widespread availability of the product at a competitive price. In addition, increasing adoption of hockey and tennis in European countries such as Germany and France is expected to drive growth over the forecast period.

The global sports composites industry is characterized by continuous product innovations, mergers & acquisitions, and capacity increases. For example, in March 2014, Toray Industries Inc, a Japanese manufacturer of sports composites acquired Zoltek, thus establishing itself as a market leader in terms of production volumes. Furthermore, Germany-based SGL Carbon announced the increase of the capacity of their Moses Lake facility by 3000 tons which is expected to result in an increase of their market share. Key players in the industry include Jarden Composites, Rossignol, Toray Industries Inc., SGL Group, and Aldila Inc.