The global Styrenic Block Copolymer market size was valued at USD 7.4 billion in 2019 and is expected to expand at a compound annual growth rate (CAGR) of 4.6% from 2020 to 2027. The market is expected to be driven by the rising demand from various applications such as footwear, adhesives and sealants, polymer modification, paving and roofing, and medical devices. Rising positive coronavirus cases across the globe have upsurge the demand for medical components such as tubing, bags, and IV drip chambers. This in turn, is further projected to propel market growth. 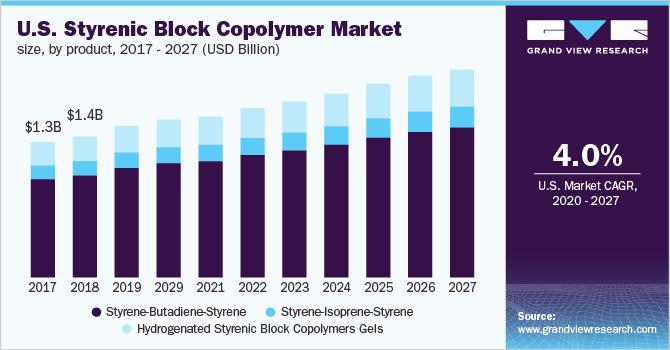 Growing need for a substitute of Polyvinyl Chloride (PVC), owing to various hazards associated with its use, has been driving the demand for styrenic block copolymers in the medical sector. In addition, several advantages of hydrogenated styrenic block copolymers over polyvinyl chloride in medical application, such as flexibility, lightweight, higher temperature resistance, and no added plasticizer among others, are driving the demand.

Increasing need for a substitute for polyvinyl chloride (PVC), because of various harmful effects associated with its use, has been fuelling the demand for SBCs in medical sector. In addition, hydrogenated styrenic block copolymers have several advantages over polyvinyl chloride in medical applications, such as lightweight, flexibility, no added plasticizer, and higher temperature resistance are fueling the demand for styrenic block copolymers.

Moreover, polyvinyl chloride is being replaced with other thermoplastic elastomers like styrenic block copolymers owing to the presence of plasticizers in PVC, which makes it hazardous and poses a threat to the environment. Furthermore, growing impact of PVC on the environment due to the release of dioxins has been changing its market dynamics.

Styrenic block copolymer (SBC) is widely used in footwear applications. Its properties such as slip and wear resistance, excellent elasticity, flexing endurance, gas barrier, and low-temperature resistance are fuelling the use of SBCs in footwear industry. In addition, higher coefficient of friction of SBC shoe soles on asphalt and wet road surfaces as compared to other materials such as vulcanized rubber and polyvinyl chloride based shoe materials is expected to increase the demand for SBC significantly over the forecast period.

The growth in sports industry is also propelling the demand for footwear. Growing health consciousness, rising consumer spending on footwear, and growing awareness about fitness are encouraging people to participate in fitness activities and sports. This, in turn, will drive the growth of footwear industry, thereby increasing the demand for SBC.

Major raw materials used in the production of styrenic block copolymers include styrene and butadiene. These raw materials are derived from derivatives of crude oil i.e. benzene, ethylene, and propylene. Thus, the variation of crude oil prices has a significant impact on the price of SBCs. Fluctuations in crude oil prices can be attributed to supply-demand imbalances, seasonal variations, and political stability. The prices of these raw materials are expected to fluctuate in the coming years. Future supply-demand changes are likely to lead to volatility in the prices of styrenic block copolymer.

The SBS segment led the Styrenic Block Copolymer market and accounted for a revenue share of more than 71.0% in 2019. This growth can be attributed to the rising demand from polymer footwear, construction, and adhesives and sealants industry. In construction industry SBS is used for paving and roofing application. SBS used in modified bituminous roofing materials to offer various characteristics including excellent waterproofing properties, resistance to thermal degradation flexibility over a wide range of temperatures, performance over long-time periods, and enhanced aesthetic. 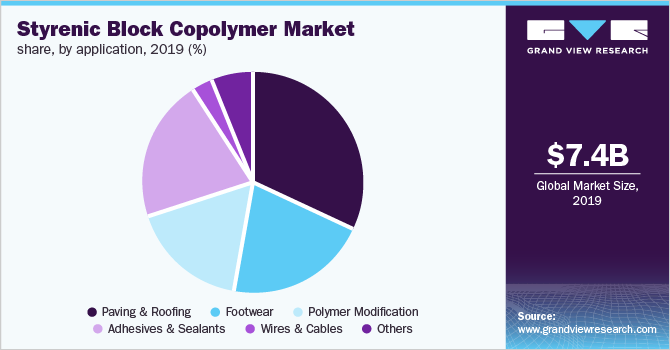 Construction is one of the major industries that have been hugely impacted by the outbreak of COVID-19 across the globe. Halted or slowdown in construction activities, movement restriction, shortage of labor as a result of measures to contain the COVID-19 outbreak have restrained the growth of construction industry, which, in turn, are anticipated to hamper the demand for SBS in paving and roofing and adhesives and sealants applications.

Asia Pacific dominated the market and accounted for a revenue share of over 43.0% in 2019. Rapid expansion in the construction sector, due to government schemes promoting basic amenities and growing need for affordable housing, is driving the growth in emerging economies such as India, China, and Indonesia. Furthermore, growing consumer awareness and stringent regulations regarding carbon footprints are expected to promote the development of green buildings. This is likely to drive the demand for lightweight and sustainable materials such as styrenic block copolymers.

Construction industry in Asia Pacific is anticipated to expand at a rapid rate, especially in emerging economies such as China, India, Indonesia, and Vietnam among other Southeast Asian countries. The exponential rise in population in such countries, rise in demand for affordable housing, and governments implementing schemes for the promotion of basic amenities such as shelter & food are the major factors driving the expansion of construction industry.

The rise in demand for permanent houses in rural areas of emerging economies such as India and South East Asian countries is expected to drive the demand for durable, low-cost roofing systems. The market is likely to benefit from rising investments in residential and non-residential construction sectors by the government as well as foreign players to provide sustainable housing and commerce facilities in economies such as India, Vietnam, Thailand, and Indonesia. 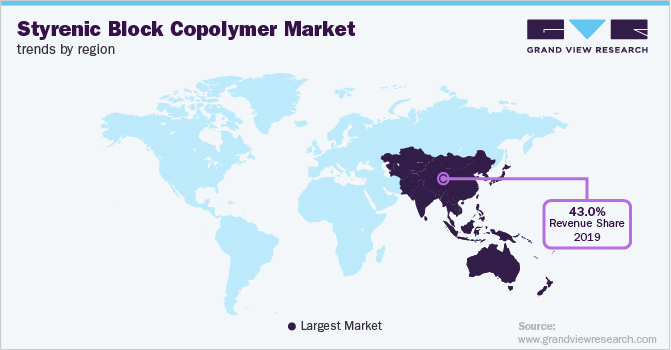 An increase in the adoption of SBC in food packaging as stretch wrapping films, along with regulatory approval in the U.S.for the use of SBC in medical applications such as medical tubing, is going to drive the market in North America. Strong demand from the footwear industry, coupled with an increase in the number of road development projects, is anticipated to further boost market growth. SBS is used in vulcanized compounding and bitumen modification applications since it flows easily at processing temperatures, behaving similar to elastic rubber under conventional application conditions. SBS rubbers are used in gasket materials, sealants, hotmelt adhesives, rubber bands, toy products, bitumen products, and shoe soles.

Increasing product demand from paving and roofing applications and strong infrastructure development in Canada and Mexico are anticipated to drive the market for styrenic block copolymer in North America over the forecast period. Approval from the U.S. FDA and the U.S. Pharmacopoeia to use these block copolymers in the medical industry to reduce dependency on PVC is expected to augment market growth.

Various properties of SBC such as high resistance, versatility in design, crystal clarity, and excellent thermal stability, along with sterilizability by ethylene oxide gas & gamma irradiation and mutagenic/irritant potential, favor the demand for styrenic block copolymers.

In Europe, factors such as recovery of overall economy and growth of end-use industries such as footwear, automotive, and infrastructure are anticipated to drive the market in the region over the forecast period. Countries such as Germany, France, Italy, Russia, and U.K. are the major producers and consumers of these block copolymers. Polymer modification is one of the major application segments and is set to play an important role in the growth of the overall industry.

Major players operating in the market have integrated their raw material production and distribution operations to maintain product quality and expand regional reach. This provides companies a competitive advantage in the form of cost benefits, thus increasing the profit margin.

Companies are undertaking research and development activities to develop new block copolymers with enhanced properties to sustain market competition and changing end-user requirements. Some of the popular technologies are anionic polymerization and high melt flow polymerization. Anionic polymerization is gaining popularity since it takes place in batches in the presence of a non-polar hydrocarbon solvent, which makes the process easier and faster. Research activities focused on new materials, which combine several properties, are projected to gain wide acceptance in this industry in the coming years. The global market is found to be significantly fragmented in nature owing to the presence of a large number of manufacturers across the globe. Some of the prominent players in the Styrenic Block Copolymer market include:

This report forecasts revenue growth at global, regional, and country levels and provides an analysis of the latest industry trends in each of the sub-segments from 2016 to 2027. For the purpose of this study, Grand View Research has segmented the global Styrenic Block Copolymer market report on the basis of product and region: 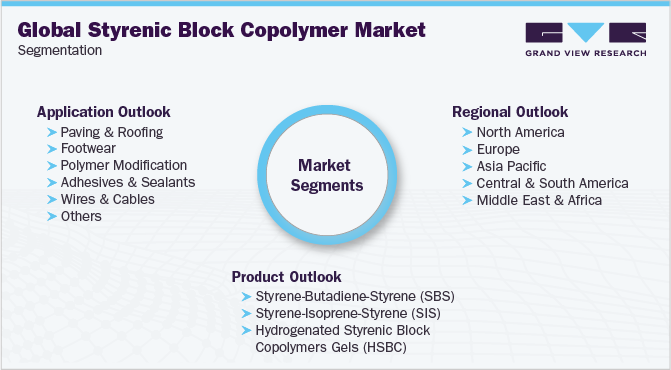 How big is the styrenic block copolymer market?

b. The global styrenic block copolymer market size was estimated at USD 7.4 billion in 2019 and is expected to reach USD 7.6 billion in 2020.

What is the styrenic block copolymer market growth?

b. The Asia Pacific dominated the styrenic block copolymer market with a share of 43.3% in 2019. This is attributable to strong demand from the construction, footwear, adhesives & sealants industry.

Who are the key players in styrenic block copolymer market?

What are the factors driving the styrenic block copolymer market?

b. Key factors driving the styrenic block copolymer market growth include increasing demand in medical applications and growing demand from the footwear industry.