The global ultra-thin glass market size was valued at USD 14.17 billion in 2018 and is estimated to grow at a CAGR of 10.1% from 2019 to 2025. The market is driven by the rising demand from flat panel displays especially from China, U.S., South Korea, and India on account of rising consumption of electronic appliances such as Television, Computers and laptops. 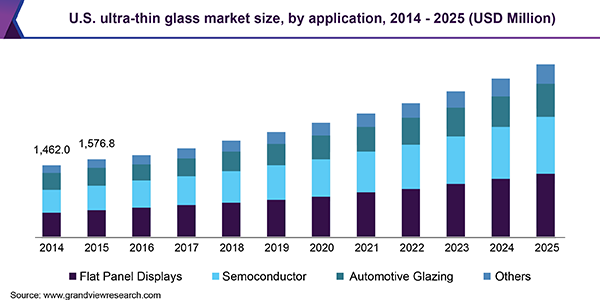 Growing demand for electronic devices such as LCDs, LEDS, OLEDs, smartphones, monitor, and laptop is likely to boost the utilization of flat display panels. In July 2018, Xiaomi launched a new smartphone named Hongmi Note 5 in Seoul, South Korea which uses a tempered ultra-thin glass of 0.3 mm thickness. With this launch the company expanded its presence in South Korea. The rising smartphone production along with the increasing display sizes of other electronic devices is likely to remain a key factor for the flat panel displays.

The growing demand for the product is compelling new manufacturers to enter in to the market. However, critical manufacturing process and huge capital investments due to technology advancement and demand for innovative products to meet various requirement of ultra-thin glass products are restricting the new entrants in the market

On the basis of application ultra-thin glass market is segmented as flat panel displays, semiconductors, automotive glazing, and other. Flat panel displays was the largest segment accounted for a volume share of 38.3% in 2018. The segment is largely driven by the increasing demand from consumer electronics such as LEDs and LCDs.

In semiconductors, ultra-thin glass is used in chip packaging and interposer applications as it operates at high frequencies and is highly transparent, thus providing better performance. The segment growth is largely driven by the growing demand for integrated chips form various industrial applications such as networking devices, LED lightings and sensors in transportation, photovoltaic (PV) inverters, smart meters, and human-machine interface systems.

Automotive glazing is anticipated to grow at a CAGR of 5.7% in terms of revenue over the coming years owing to the rising demand for lightweight cars. Benefits of ultra-thin glass such as light weight, and impact resistance make them suitable in automotive windows.

The reduction in weight further helps in providing better fuel economy and reduce CO2 emissions. This is likely to increase the product demand in automotive glazing, thus propelling the market growth over the coming years.

Ultra-thin glass manufacturers are investing largely on product innovations that are used in organic electronics as it is a global emerging sector. In May 2014, AGC launched a new product named SPOOL, an ultra-thin sheet glass that is used in flexible displays, organic LEDs, and touch panels to expand its product portfolio into various applications.

Asia Pacific was the largest regional segment accounted for a volume share of 70.5% in 2018. The growth is attribute to the rising demand for flat panel displays especially in China, India, and South Korea. China holds nearly 50% of the global flat panel display fabrication plants followed by South Korea.

Large LED and LED manufacturing companies are expanding in to these countries to meet the growing demand from customers. In May 2018, Corning Incorporated opened a new LCD glass substrate manufacturing facility in Anhui province, China. The plant produces TFT- grade Gen 10.5 substrates and uses are Corning’s EAGLE XG® Slim glass in the manufacturing process. This is anticipated to propel the market growth in the region.

North America’s ultra-thin glass market was dominated by the U.S. in 2018 owing to the large semiconductor industry. According to Semiconductor Industry Association (SIA), the country accounted for nearly 45% of the global semiconductor market share in 2018.

SIA’s 8-point policy plan which includes research, trade, tax, export control, work force, environment, health, & safety, anti-counterfeiting, and intellectual property was aimed to promote the U.S. economic growth & innovation and to strengthen the U.S. semiconductor industry, which in turn is anticipated to augment the market growth over the coming years.

Europe is projected to register a growth rate of CAGR 6.4% in terms of revenue over the forecast period. The growth is driven by the propelling demand for LCDs, LEDs, solar energy, and automotive sectors. This is likely to increase the utilization of the product over the coming years.

According to Solar Power Europe, European’s renewable target of 40% greenhouse gas emission reduction. The countries in the region such as Germany is likely to add 8GW of solar Photovoltaic capacity installation to meet the renewable target. This is anticipated to increase the product demand over the coming years.

Some of the established market players are SCHOTT AG, Corning Incorporated, AGC Inc. Nippon Electric Glass, Xinyi glass, and CSG Holding Co., Ltd. Capacity expansion is the key strategy undertaken by most of these manufacturers to maintain competitive advantage over others.

In December 2019, CSG Holding Co., Ltd announced to construct a kiln to produce ultra-white electronic and ultra-white special glass of 0.33 to 1.1mm thickness that are used in electronic display tempered protective glass for mobile phones.

This report forecasts revenue and volume growth at country & regional levels, and provides an analysis of the industry trends in each of the sub-segments from 2014 to 2025. For the purpose of this study, Grand View Research has segmented the global ultra-thin glass market report on the basis of application and region:

How big is the ultra-thin glass market?

What is the ultra-thin glass market growth?

Which segment accounted for the largest ultra-thin glass market share?

b. Flat panel displays dominated the ultra-thin glass market with a share of 38.3% in 2019. This is attributable to the increasing demand from consumer electronics such as LEDs and LCDs.

Who are the key players in ultra-thin glass market?

What are the factors driving the ultra-thin glass market?

b. Key factors that are driving the market growth include rising demand from flat panel displays especially from China, U.S., South Korea, and India on account of rising consumption of electronic appliances such as Television, Computers and laptops.