The U.S. pet wearable market size was valued at USD 617.0 million in 2020 and is expected to expand at a compound annual growth rate (CAGR) of 12.9% from 2021 to 2028. The strong emphasis pet owners in the U.S. are putting on ensuring the health and wellbeing of their pets, the advent of IoT-based pet tracking devices, and the increase in the spending on pets in line with the rising levels of disposable income are some of the factors that are expected to drive the growth of the market over the forecast period. Individuals have adopted wearables for their pets in the country to safeguard them and notice any health issues owing to the influence of the pandemic. The escalating spread of the pandemic and increasing health awareness for their pets among individuals kept the market stagnant in the last few quarters of 2020 and 2021 will support the pet wearable market growth. 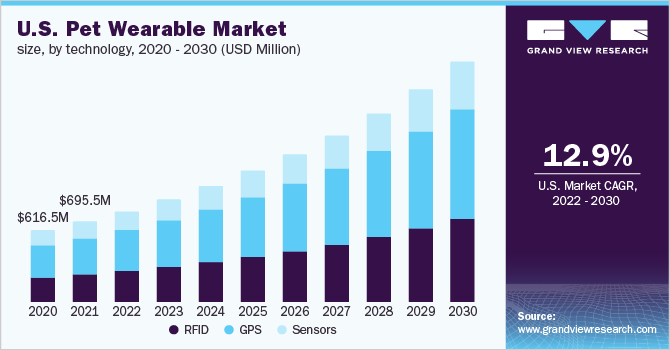 The pet wearable market is emerging as a lucrative market owing to the growing awareness among pet owners about ensuring the wellbeing of their pets. Individuals are increasingly adopting pets for various purposes, including entertainment, companionship, fitness, and mental wellbeing. Pet owners are spending more on their pets than ever as the levels of disposable income continue to increase. According to the data published by the U.S. Bureau of Economic Analysis, disposable personal income in the U.S. increased from USD 17,640.4 billion in February 2021 to USD 21,802.3 billion in March 2021. Pet owners are increasingly opting for wearable devices based on the latest, advanced technology to monitor their pets and gather vital information about them. As such, the pet wearable market holds immense investment potential and can open new opportunities for start-up companies to consider a market foray, particularly because of the growing demand for sophisticated pet wearables and gadgets among tech-savvy pet owners.

The outbreak of the COVID-19 pandemic triggered a global economic slowdown, especially during H1/2020. Several governments across the world imposed lockdowns and restrictions on the movement of people and goods as part of the efforts to arrest the spread of coronavirus. As a result, production activities were suspended temporarily, thereby disrupting the overall supply chains activities. North America was not an exception to the situation. At this juncture, pet owners in the U.S. became particularly concerned about the safety and health of their pets, especially in the wake of the outbreak of the pandemic, and went on to opt for pet wearable devices. However, increasing health awareness for their pets among individuals kept the market stagnant in the last few quarters of 2020 and 2021.

The demand for GPS-based devices has been rising considerably in line with the proliferation of smartphones, tablets, and other connected devices; advances in real-time positioning; and the evolving mapping portals in various parts of the world, including the U.S. The market for GPS-based applications is poised for lucrative growth as GPS providers are aggressively striking strategic alliances with stores, mobile phone manufacturers, and application developers. The adoption of GPS technology is expected to gain traction as a result. The growing adoption of GPS technology bodes well for the growth of the market over the forecast period.

The adoption of RFID and GPS technologies has been witnessing significant growth over the past few years in line with the continued advances in technology. The growing need to track objects in real-time is particularly driving the adoption of RFID- and GPS-based innovative solutions. The growth of the Real-Time Location System (RTLS) market has also triggered the demand for solutions based on RFID and GPS technologies. GPS-based tracking devices for pets are particularly gaining popularity in the U.S. Tracking chips play a crucial role in finding stolen or lost pets. For instance, the American Society for the Prevention of Cruelty to Animals (ASPCA) reported that out of the total number of pet dogs reportedly lost over the past five years, over 15% have been reunited with their owners with the help of the dog tracking chip implanted in the dogs or installed within the collars of the dogs. As such, various companies have started offering a wide variety of dog trackers, thereby opening immense options for dog owners to choose from different models, colors, shapes, sizes, and features.

The trend of adopting pets has been gaining significant traction in the U.S. According to American Pet Products Association (APPA), more than 65% of the households in the U.S. own a pet. While 54.4% of the U.S. households own at least one dog, 42.9% own at least one cat, thereby leading to nearly 77.8 million pet dogs and 85.8 million pet cats across the U.S. The growing trend of adopting pets in the U.S. bodes well for the growth of the market. The wearable devices offered by companies, such as The Paw Tracker, Tractive, and Tagg, support GPS-based tracking to locate a pet. These companies also offer software applications to convey real-time updates about the location of the pets on the smartphones of pet owners.

Based on application, the market has been further segmented into behavior monitoring & control; medical diagnosis & treatment; identification & tracking; and facilitation, safety, & security. The identification and tracking segment accounted for a revenue share of 62.7% in 2020. Pet tracking devices, such as smart collars, which can be connected with smartwatches, allow pet owners to track their pets in real-time and make sure they do not get lost. According to American Humane, nearly 10 million dogs and cats are lost or stolen in the U.S. every year. At this juncture, pet tracking devices can particularly help in preventing pets from getting lost, thereby driving the demand for pet wearable devices for identification and tracking purposes in the U.S.

The medical diagnosis and treatment segment is projected to register a CAGR of 16.1% from 2021 to 2028. The growth of the segment can be attributed to the increasing demand for pet wearable devices that can offer quantified data about the physical activity and health of pet animals to pet owners. Continuous monitoring of the health of pet animals is of paramount importance. As per the data for 2017 published by the Association for Pet Obesity Prevention (APOP) in April 2018, about 56.0% or 50.2 million dogs and 60.0% or 56.5 million cats in the U.S. were either overweight or obese. Obesity in pet animals, including dogs and cats, can lead to severe illnesses and reduce their life expectancy by two years or even more.

Based on technology, the U.S. pet wearable market has been further segmented into RFID, GPS, and sensors. The GPS segment dominated the market in 2020 and accounted for a 44.4% revenue share. The growing demand for pet wearable devices for monitoring and security purposes has been driving the growth of the segment. GPS-enabled wearable devices play a vital role in keeping pet owners informed about the location of their pets through smartphone applications and subsequently in finding stolen and lost pets. The introduction of 2-way communication over software platforms and integrated devices for tracking pets is particularly expected to trigger consumer interest in the future. As such, market players are putting a strong emphasis on expanding their product and service offerings by offering products featuring the latest technologies and features. 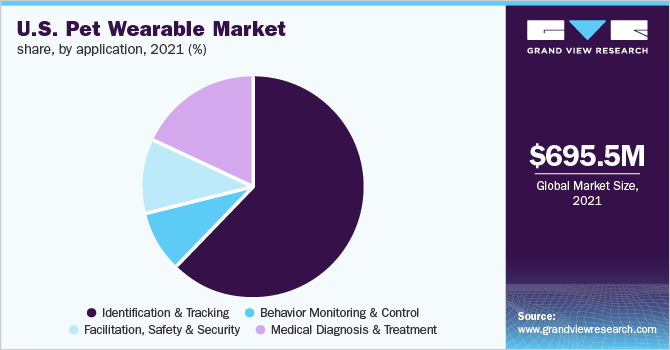 The RFID segment is projected to expand at a CAGR of 12.8% over the forecast period. RFID ensures higher productivity, reliability, transparency, and accuracy in tracking and identifying pets. Pet wearable devices equipped with RFID technology are often used with various sensors to track vital health parameters, such as pulse, body temperature, Heart Rate Variability (HRV), calorie intake, and respiration, of pets continuously and accurately throughout the day. The demand for Wi-Fi-enabled RFID devices is particularly growing owing to the location-based tracking feature they typically support.

Some of the prominent market players include Allflex USA Inc.; Datamars; Avid Identification Systems, Inc.; FitBark; Intervet Inc.; Garmin Ltd.; Invisible Fence; Konectera Inc.; and Link AKC. These market players are putting a strong emphasis on strategic partnerships and collaborations, and mergers and acquisitions. For instance, in April 2018, Datamars announced the acquisition of Simcro Limited, a company offering an animal health delivery system. Datamars envisaged leveraging the acquisition to enhance its integrated portfolio and expand its product ranges for consumers. Similarly, in March 2019, Link AKC was acquired by Smart Tracking Technologies, LLC, an IoT company. After this acquisition, Smart Tracking Technologies, LLC will start working on improving the product features. The Link AKC headquarters will be relocated to Florida from Connecticut.

Market players are focusing aggressively on new product launches and joint ventures to strengthen their position in the market. For instance, in August 2018, Garmin Ltd. introduced Astro 900, a handheld device, and T9, a GPS dog tracking device. The devices are designed to be used in the U.S. and Canada. The devices use a 900 Mhz radio frequency to track at least 20 dogs within a range of 5 miles and update the location of the dogs at an interval of 2.5 seconds. Similarly, in March 2018, PetPace launched a new solution called the BioResponse system. The solution allows pet owners to examine the bio-parameters of their pets in correlation to any treatments or events. Some of the prominent players operating in the U.S. pet wearable market are:

This report forecasts revenue growth at the country level and analyzes the latest industry trends in each of the sub-segments from 2018 to 2028. For this study, Grand View Research has segmented the U.S. pet wearable market report based on technology and application:

How big is the U.S. pet wearable market?

What is the U.S. pet wearable market growth?

b. GPS segment dominated the U.S. pet wearable market with a share of 44.4% in 2020. The growing demand for pet wearable devices for monitoring and security purposes has been driving the growth of the segment

Who are the key players in U.S. pet wearable market?

What are the factors driving the U.S. pet wearable market?

b. Key factors that are driving the market growth include growing awareness among pet owners about ensuring the wellbeing of their pets. Individuals are increasingly adopting pets for various purposes, including entertainment, companionship, fitness, and mental wellbeing.