The global 3D display market size was valued at USD 41.59 billion in 2016. Surging demand for 3D technology in home entertainment and gaming industries is projected to be one of the key trends spurring product sales. The industry is expected to gain significant traction in the near future with declining price of electronic devices, coupled with increasing disposable income of individuals globally. 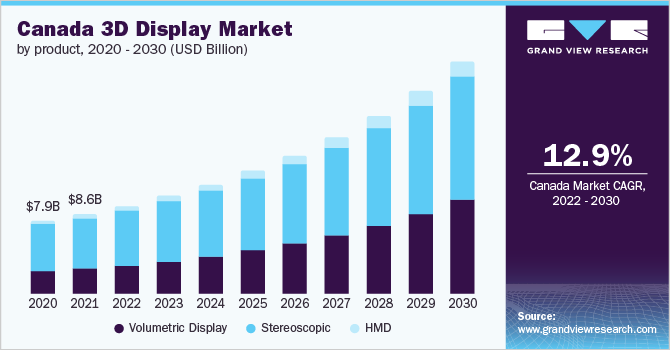 The gaming industry has witnessed significant changes over the past few years in terms of technology, gaming experience, and graphics. The industry is moving toward enhancing complete gaming experience with 3D technology, which in turn, is stimulating market growth. In addition, growing interest in OLED and LED technologies, which offer improved picture quality and performance compared to traditional display technologies, is anticipated to benefit the overall market.

Evolving consumer preference and awareness regarding high definition technology has resulted in the expansion of the industry. Increasing adoption of digital cinema screens capable of delivering 3D viewing experience and growing consumer inclination toward 3D movies are estimated to augment the market. Burgeoning incorporation of these displays in numerous devices such as monitors, smartphones, TVs, notebook PC, and digital photo frames is also poised to play a pivotal role in the growth of the market.

Emerging economies including India and China are likely to experience tremendous growth over the forecast period owing to widening base of middle-class population and improving standards of living. Projectors and monitors, which are among the key applications of 3D displays, are expected to register a sharp rise in sales in the near future owing to changing consumer preferences and surging demand for high definition graphics. High cost, coupled with lack of 3D content and health-related issues such as headaches, nausea, and motion and eye disorders, is anticipated to hinder market growth.

The stereoscopic displays segment is estimated to hold the largest market share throughout the forecast period. This can be attributed to widespread use in the entertainment and gaming industries for a range of applications such as movies, animations, academics, and video games. Furthermore, advancements in autostereoscopic technology and reduced costs of stereoscopic products are contributing to the growth of the segment.

The global volumetric 3D display market surpassed USD 11.3 billion in 2016 and is projected to witness noteworthy growth over the forecast period. These products possess the ability to generate a true 3D image, which can be viewed by users without a headgear. This is poised to fuel adoption in events, art galleries, and others.

The head mounted displays (HMD) product segment is likely to register the highest CAGR during the same period, owing to its growing popularity in sectors such as science, engineering, and medicine. The growth of the segment can be attributed to rapid technological advancements and declining prices of 3D displays.

The LED technology segment accounted for the leading share in the overall market revenue in 2016. LED panels are widely used as backlighting solutions in order to enhance image quality and get fast response. Several market players are focusing on development of LED-based displays for numerous applications, including TVs, smartphones, monitors, and HMDs. The segment, along with OLED, is poised to make inroads in the shares of DLP-based technology.

The OLED technology segment is likely to exhibit the highest CAGR during the forecast period. The growth of the segment can be attributed to increasing adoption across various devices and improved picture quality and performance compared to traditional displays.

TV was the largest revenue segment in 2016. Shift in consumer preference from watching movies at theatres to watching them at home on TVs or computers has impelled TV manufacturers to focus on 3D display as a value addition to their products. These TVs render a better impact of visualization, offering improved picture quality, vibrant colors, and a sense of deep perception to its viewers. CEMs are trying to position 3D-based TVs in high-end devices with premium features.

The HMD segment is projected to expand at the highest CAGR during the forecast period. Increasing use of HMDs and smart glasses across a variety of applications in various industries is supplementing the growth of the segment.

The smartphones segment is expected to post a CAGR just over 23.0% during the same period, owing to rising incorporation of the technology in mobile devices. Changing lifestyles are impelling people to purchase high-end smartphones, which in turn is triggering the adoption of 3D displays. Moreover, original equipment manufacturers (OEMs) are focusing on 3D data visualization solutions for mobile devices, thereby stoking market growth.

North America is anticipated to lead the global market in 2016. Technological advancements, increasing penetration of smartphones, and high adoption rate of digital services are key factors influencing the growth of the regional market. Moreover, surging demand for video games in the region is revving up adoption of stereoscopic displays. Increasing use of 3D display technology in entertainment, gaming, defense, and engineering simulations will also bolster the market over the forecast period.

However, Asia Pacific is estimated to emerge as the fastest-growing region during the same period, owing to changing customer preferences and rising disposable household income. The presence of major technology players such as Samsung Electronics, LG Electronics, Panasonic Corporation, Sony Corporation, and Fujifilm Holdings Corporation is also supporting the growth of the market.

The market is competitive owing to the presence of various prominent players such as Samsung Electronics, LG Electronics, Panasonic Corporation, Sony Corporation, Sharp Corporation, Toshiba Corporation, and Fujifilm Holdings Corporation. Industry players have been focusing on organic growth strategies such as R&D investments, product innovation, and value-added features to expand their product portfolios and gain a larger share in the market.

Manufacturers are focused on developing new and innovative products, such as smart TVs and Ultra-HD 4K TVs, that meet the evolving needs of customers. In November 2015, Apple launched a smartwatch with a flexible OLED display that renders high-resolution graphics and text images. Development of new products is poised to escalate the growth of the overall market over the forecast period.

This report forecasts revenue growth at global, regional, and country levels and provides an analysis of industry trends in each of the sub-segments from 2014 to 2025. For this study, Grand View Research has segmented the global 3D display market report based on product, technology, application, and region: