The Australia & New Zealand research antibodies market size was valued at USD 98.4 million in 2018 and is anticipated to grow at a CAGR of 8.4% during the forecast period. A rise in the number of initiatives being undertaken by the Australian government to advance the biotechnology sector is expected to fuel the growth in the country. In May 2019, Federal Labor offered businesses an R&D tax offset for collaborating with science-based agencies and universities, such as The Commonwealth Scientific and Industrial Research Organisation (CSIRO), to promote innovation and knowledge in the biotechnology sector. In addition, a 10% tax can be added to the calculated tax offset if a business is collaborating with any public institution. This plan would help in increasing R&D investments in Australia to 3% of GDP by 2030 and is expected to act as a key tool for fostering an alliance between research and industry, thereby improving industrial capabilities in Australia. R&D tax incentive in Australia has encouraged biotechnology companies in the region to conduct R&D.

For instance, in 2018, Shape Pharmaceuticals, Inc. supported R&D investments in the Australian biotechnology industry by conducting clinical trials to study the effect of SHP-141 on patients diagnosed with psoriasis. These tax incentives help companies achieve a cost advantage while selecting clinical trial sites for R&D processes. 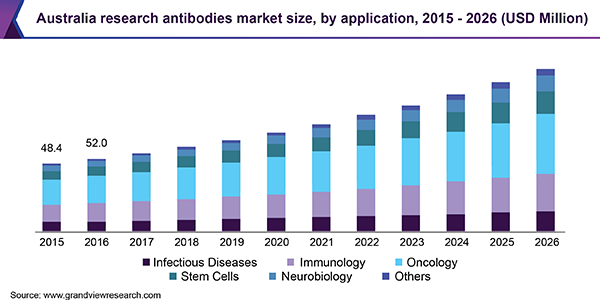 A rise in R&D investments by the government is also expected to boost the market. In 2018, the Victorian government allocated USD 1.5 million for the establishment of an Advanced Biotechnology Manufacturing Platform to enhance the production of antibodies, vaccines, stem cells, and growth factors, among others, for testing in human clinical trials. This facility would enable various Australian biotechnology companies to conduct R&D in the state, thereby generating jobs and propelling the growth of various companies currently conducting clinical trials in Victoria. The government is also promoting the development of the biotechnology sector through Future Industries Fund.

Growth in stem cell and neurobiology-based research is expected to boost the market over the forecast period. The Center of Research Excellence in Neuromuscular Disorders Australia is a wide collaboration of neuromuscular experts, who use advanced technologies and approaches in science & medicine to improve diagnosis. In addition, it aims to transform treatment into effective therapy of neurological diseases from compassionate management. The Australian Neuromuscular Network was formed in the year 2010 by the Center of Research Excellence in Neuromuscular Disorders along with other neuromuscular specialists, scientists, and professionals across New Zealand and Australia.

On the basis of product, Australia & New Zealand research antibodies market is segmented into primary and secondary antibodies. Primary antibodies held the largest share and are anticipated to witness the highest CAGR owing to the rise in the adoption of reagents developed using antibodies, due to the various benefits associated with them such as greater specificity, easy availability, and suitability in various research applications.

Pharmaceutical & biotechnology companies held the largest share of the end-use segment in 2018, which can be attributed to increase in the adoption of antibodies in drug development and research organizations. Contract research organizations are anticipated to grow at a lucrative CAGR during the forecast period owing to cost-effectiveness. 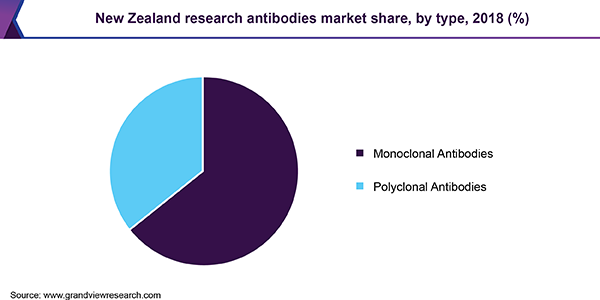 The academic & research institutes segment is expected to witness constant growth owing to the presence of various academic research groups that are involved in the study of complex biological systems using advanced reagents. Benefits such as a greater understanding of biological processes and complex systems are anticipated to create growth opportunities in the segment.

Contract research organizations are anticipated to grow at a lucrative CAGR during the forecast period. The majority of the companies prefer CROs owing to the various advantages associated with contract services. These benefits include cost advantage, increased efficiency of services, and enhanced productivity, which help a company focus on its core expertise.

Their production does not require skilled professionals, and large batches can be produced as per client requirements. These antibodies can recognize multiple antigens on one epitope and can, therefore, be utilized in the study of various diseases ranging from cancer to metabolic

On the basis of technology, the Australia & New Zealand research antibodies market is segmented into western blotting, immunoprecipitation, immunochemistry, ELISA, immunofluorescence, flow cytometry, and other technologies. Western blotting held the largest share of the technology segment in 2018 owing to rising demand for rapid diagnostic methods. On the other hand, technical upgradation is anticipated to create growth prospects for technologies in the pipeline. ELISA is anticipated to witness the highest CAGR during the forecast period owing to the conventional use of polyclonal antibodies in sandwich ELISA.

Western blotting held the largest share in 2018 owing to the rise in the prevalence of diseases with a limited number of treatment options. Western blotting offers high accuracy and sensitivity and is considered a gold standard for testing. In addition, an increase in government initiatives to fund research activities is one of the factors contributing to the highest market share held by this segment, as it is conventionally used in research laboratories.

The use of murine monoclonal antibodies is increasing in various end-use settings, which is expected to positively impact market growth. Mice have been predominantly used in the production of antibodies. The structural similarities in mice and human antibodies are a prime factor responsible for high adoption. Cost-effectiveness and the ability to multiply quickly are among the factors fueling the growth of this segment.

Moreover, mouse-derived monoclonal and polyclonal antibodies are relatively easier to produce and possess greater specificity. Technological advancements in the development processes of these products, such as hybridoma technology that aids in the production of monoclonal antibodies in specialized cells are further augmenting the demand for mouse antibodies.

Rabbits are also extensively used for the production of antibodies, owing to various advantages such as higher affinity and specificity in comparison with antisera obtained from other animal hosts. The higher specificity of these products makes them ideal for use in the detection of small molecules, such as pollutants; toxins; hormones; drugs; nonprotein targets, such as carbohydrates & lipids; and post-translational alterations such as phosphorylation.

Oncology held the largest share of the application segment in 2018. The largest share can be attributed to the growing prevalence of cancer, which leads to an increase in the need for R&D pertaining to advanced therapeutics. On the other hand, stem cell is anticipated to witness lucrative CAGR during the forecast period owing to a significant increase in stem cell research.

The rising prevalence of infectious diseases, the growing geriatric population, decreasing immunity levels, and rising awareness among people about communicable diseases are some of the high-impact-rendering drivers of the market. The growing incidence of autoimmune diseases coupled with the limited presence of advanced therapeutics is predominantly driving the segment growth. Significant advancements in immunology research have boosted the adoption of research antibodies in recent years.

Oncology accounted for the largest share of research antibodies in 2018. The segment is also anticipated to grow at a considerable CAGR owing to an increased incidence of cancer. According to WHO, the number of new cancer cases is anticipated to increase by approximately 70.0% in the next two decades. Monoclonal antibodies are also used for the diagnosis of lymphoid & myeloid malignancies, tissue typing, and immunological intervention using a passive antibody.

Owing to the steady increase in the demand for transplantable tissues and low-quality donor cells, the stem cell research segment is expected to grow. Moreover, increasing adoption of cell isolation and culture, which involves the use of research antibodies, is further anticipated to broaden segment growth prospects.

An increase in the number of products launched by market players is expected to fuel market growth. For instance, in April 2019, Bio-Rad launched a range of isotype-specific secondary antibodies-IgG1, IgG2a, and IgG2b. These products are used to offer specificity when used in ELISA, imaging, western blotting, and flow cytometry, among others, as well as for improved signaling.

Mergers & acquisitions and collaborations are some of the other strategic initiatives undertaken by leading players to gain market share, for instance, Abcam Plc acquired Calico Biolabs. This initiative helped the company expand its product portfolio through the addition of high-quality recombinant rabbit monoclonal antibodies for immunohistochemistry. As per the agreement, Abcam was to also expand its custom rabbit monoclonal antibody production. These factors are further anticipated to aid growth during the forecast period.

This report forecasts revenue growth at the country level and provides an analysis of the latest industry trends in each of the sub-segments from 2015 to 2026. For the purpose of this study, Grand View Research has segmented the Australia & New Zealand research antibodies market report on the basis of product, type, technology, source application, end-use, and country: