The global diethylene glycol monobutyl ether acetate market size was estimated at USD 122.3 million in 2018 and is expected to witness a revenue-based CAGR of 3.3% from 2019 to 2025. Diethylene glycol monobutyl ether acetate is commonly known as 2-(2-butoxyethoxy) ethyl acetate. It has a mild pleasant odor and it is easily soluble in ethyl ether, acetone, water, ethanol, and most of the organic liquids. The product is used as a solvent for gums, oils, resins, and polymeric coating and as a plasticizer in coatings and lacquers, printing inks, and high-bake enamels.

Multiple regulatory authorities across the globe have put stringent regulations on the use volatile and toxic solvents in formulation of various paints and coatings. Increasing demand for diethylene glycol monobutyl ether acetate as latex coalescent in manufacturing of low VOC paints is anticipated to drive the market for diethylene glycol monobutyl ether acetate over forthcoming period. 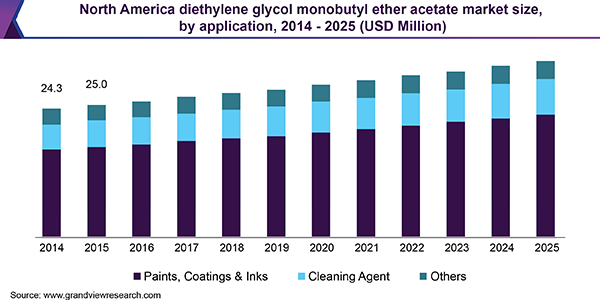 Diethylene glycol monobutyl ether acetate is used as a solvent in the specialty printing ink industry owing to its superior performance. It is also widely used to produce ink formulation for ball-point pens. Printing inks are highly utilized in packaging and consumer goods. The consistent demand for printing on various packaging materials supported by increasing trend of using e-commerce platforms is anticipated to positively impact the market for diethylene glycol monobutyl ether acetate in near future.

Acetic acid is one of the key raw materials used for the formulation of diethylene glycol monobutyl ether acetate. China is among the largest producer and exporter of acetic acid globally. By 2019, the supply of acetic acid was tightened owing to plant outage of two key manufacturers, namely, Shanghai Huayi and Jiangsu Sopo. Multiple other manufacturers from the region such as Chang Chun Petrochemical, Lotte BP Chemicals, and Kingboard Chemical have undergone plant maintenance shutdown which has resulted in limited overall production in the current year. However, the export market will not be much affected in the long run owing to stable supply and prices of methanol, which is major raw material of acetic acid.

Diethylene glycol monobutyl ether acetate is used as an auxiliary coalescing agent in emulsion paints. Also, it is broadly used as a high-boiling point solvent for printing ink or high-temperature enamel. In addition, it finds application as a solvent in silk screen printing ink owing to its low solubility and slow speed of volatilization. Paints and coatings are increasingly gaining traction in developed economies due to the high rate of renovation activities across Western Europe and parts of North America.

Germany has reflected the highest consumption of paints and coatings for architectural development and is expected to grow further with initiatives of government to build 1.5 million housing units in next two years. This is expected to positively affect the consumption of diethylene glycol monobutyl ether acetate in paints and coatings in near future.

Cleaning agents are widely used across many industries, especially electronics. However, companies such as BASF and Solventis have formulated high-performance cleaners using diethylene glycol monobutyl ether acetate, which are being highly preferred for use in industrial and household cleaning applications.

The demand for cleaning agents is high in several countries of Asia Pacific including China, Japan, and India and it is anticipated to exhibit a CAGR of 3.4%, in terms of revenue, from 2019 to 2025. This is owing to factors such as rising awareness about cleanliness and workplace hygiene. This factor is expected to positively drive the demand for cleaning products over the coming years, in turn, augmenting the overall growth of the diethylene glycol monobutyl ether acetates market.

North America has a substantial market for cleaning products in industrial machinery and commercial and residential hard floor cleaning. The region is a fast-growing market for electronic products, which, in turn, contributes to a high demand for electronics cleaning solutions.

On a global scale, sale of smartphones reached USD 522 billion in 2018 from USD 399.2 billion in 2015, which has denoted significant growth over the period of four years. North America is a key market for electronic products such as computers, laptops, cellphones, and home entertainment gadgets. Establishment of businesses including small and medium enterprises is likely to fuel the demand for computer and laptops in the region, thereby augmenting the utilization of cleaning solvents. North America is expected to witness a CAGR of 2.8%, in the market for diethylene glycol monobutyl ether acetate, in terms of volume, from 2019 to 2025. 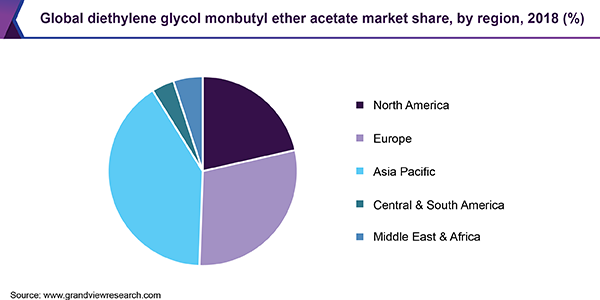 Europe is majorly driven by increasing consumption of industrial chemicals in highly industrialized economies in the Western Europe such as Germany, U.K., France, Italy, and Russia. The region accounted for 30.1% of global revenue share in 2018 in the market for diethylene glycol monobutyl ether acetate. In 2017, Germany household cleaning product consumption amounted to USD 7.63 billion, followed by France, U.K., and Italy.

Among the total cleaners consumed in Europe in 2018, household cleaners accounted for more than 15.0% of the overall market share and laundry care cleaners held a share of around 47.0% under household cleaners. As cited by International Association for Soaps, Detergents and Maintenance Products (AISE), rising consumer awareness regarding household cleanliness and hygiene is one of the key factors propelling the demand for various cleaners in the region.

Asia Pacific, led by China, emerged as the largest market for printing inks globally in 2018. Ascending demand for high-performance printing inks in the country can be attributed to the rapid increase in the number of packaging companies. There has been significant rise in the number of new participants in the packaging sector as well as existing companies are also expanding their operations in the country.

Tetra Pak, a leading packaging solution provider, opened its eighth packaging facility in Asia Pacific in 2019.Packaging sector is one of the key application industries for printing inks, wherein the ink is used for labelling purposes. Hence, the rise in the demand for packaging products is expected to fuel the demand for diethylene glycol monobutyl ether acetate in printing ink formulations.

The activities and strategies of key players in the market for diethylene glycol monobutyl ether acetate are based on regulatory framework related to the product. The Occupational Safety and Health Administration (OSHA) has formulated regulations stating permissible limits of 10 ppm (time-weighted average) for a frame of eight hours maximum.

Multiple tests were performed in North America and the American Conference of Governmental Industrial Hygienists declared similar permissible limits of 10 ppm as that by the OSHA. Bearing these regulations in mind, companies such as BASF have evolved new alternatives to diethylene glycol monobutyl ether acetate such as formic acid, which is considered comparatively efficient and more environment-friendly.

The changing dynamics under the influence of these formulated regulations by several environmental and human health agencies have had a strong impact on the acetic acid market. Limitations of acetic acid usage in the formulation of solvents have slightly lowered the consumption of the substance in the recent past.

Companies such as Henkel AG have a broad portfolio of high performance and fast-evaporating electrical parts and contact cleaners. However, high involvement of the U.S. EPA in monitoring chemicals used in formulation of cleaners has resulted in development of non-CFC content cleaners to sustain in the market for diethylene glycol monobutyl ether acetate.

This report forecasts revenue growth at global, regional, and country levels and provides an analysis of the latest industry trends in each of the sub-segments from 2014 to 2025. For the purpose of this study, Grand View Research has segmented the global diethylene glycol monobutyl ether acetate market report on the basis application and region: