The Europe, CIS and Middle East and North Africa sorbitol market size was valued at USD 434.9 million in 2019 and is expected to expand at a compound annual growth rate (CAGR) of 3.4% from 2020 to 2027. Rising awareness regarding healthier diets amongst the consumers in key markets, such as Germany, France, Italy, and UAE, is expected to promote the consumption of dietary foods and beverages, thereby driving the sorbitol demand. The rising demand for low-calorie and sugar-free products on account of the increasing prevalence of diabetes and obesity is expected to propel the demand for sorbitol. High sorbitol demand for the manufacturing of products that tend to harden or dry, such as baked goods, confectionery, and chocolates, is likely to boost industry growth. 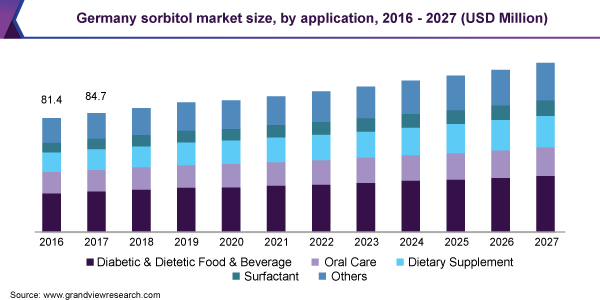 The shifting consumption trend toward fiber-based foods in developed countries, including Germany and France, on account of increasing awareness regarding nutritional enrichment, is expected to fuel the demand for fiber-rich products, thereby augmenting demand for sorbitol over the forecast period. The predominant consumption of bread as a staple food in Europe is expected to remain a favorable factor for industry growth in the coming years.

The packaged food industry has witnessed significant growth in the recent past on account of the changing eating habits of consumers. Long working hours, increasing young working population, and quick access to packed food available in a broad range of cuisines are the factors contributing to the changing consumer lifestyles. Thus, the use of the product as a preservative in the ready to cook packaged food products is expected to drive the market over the forecast period.

Furthermore, lack of time and increasing purchasing power of consumers are driving the demand for packaged food products. Companies such as ConAgra, Unilever, and McCain are focused on strengthening their presence in the market by ensuring easy availability of packaged food products in hypermarkets and retail stores. All the factors combined are expected to complement the market growth over the forecast period.

The market presence of other sugar alcohols and conventional sucrose syrups in the food and beverage, chemicals, pharma, personal care, and animal feed industries is expected to pose a credible threat to the market. Sugar syrup is expected to remain one of the most economical sweetening ingredients in the food and beverage and pharmaceutical industries owing to its easy availability and low prices as compared to other artificial sweeteners.

Furthermore, the growing demand for other polyols, including mannitol and xylitol, as a low-calorie ingredient in the nutrition sector on account of new product launches by companies, including DuPont, is expected to shrink the application of sorbitol over the next seven years.

The diabetic and dietetic food and beverage application segment led the market and accounted for a 35.8% share of the overall revenue in 2019. The growing demand for artificial sweeteners, such as sorbitol, by the food and beverage manufacturers to produce baked foods, frozen products, confectionaries, and numerous cold drinks is expected to support industry growth. Furthermore, the European Union has approved the use of sorbitol as an additive and humectant in the food industry, which is likely to propel the market growth.

The product finds application as foaming and wetting agents, emulsifiers, dispersants, and detergents. Escalating consumer preference for the use of bio-based products, particularly in Europe, is expected to drive the market for bio-surfactants, such as rhamnolipids and sorbitol. Additionally, stringent regulations aimed at reducing greenhouse gas emissions are expected to promote the growth of bio-based surfactants, which, in turn, will have a positive impact on market growth.

The food segment led the market and accounted for 35.8% share of the overall revenue in 2019. The growth of the food and beverage industry directly influences the demand for sweeteners including sorbitol. The increasing adoption of various types of frozen foods, confectionery, and dairy products by end-consumers is expected to drive the market. Furthermore, the rising demand for low calorie non-alcoholic and dairy beverages is anticipated to augment the sorbitol demand.

Low-calorie sweeteners are majorly used to deliver sweet flavor in formulating food and beverage products. In addition, rising health concerns over tooth decay, diabetes, and diarrhea and the increasing importance of low-calorie foods are expected to strengthen the demand for sugar alternatives, such as sorbitol.

Rapid population growth in the Middle East, coupled with the high demand for processed food products in the region, is expected to drive the demand for sorbitol. Increasing consumer knowledge regarding convenience foods and exotic cuisines with different tastes and flavors is expected to boost the penetration of sorbitol in various food types.

The growing awareness about the environmental impact caused due to the production of petroleum-based polymers is leading to rising demand for bio-based polymers. As a result, sorbitol is expected to witness significant demand from the ethylene glycol production industry.

Isosorbide is expected to witness significant gains on account of increased adoption as a biobased monomer building block in the production of polycarbonates, polyesters, polyurethanes, and epoxide resins. With the growing demand for sustainable polymers, many of the sorbitol manufacturers are forward integrating themselves in the production of isosorbide monomers.

For instance, in 2015, Roquette Frères announced the launch of its new isosorbide production unit at its site in Lestrem, Pas-de-Calais, France. The unit has a capacity of 20,000 tons per year isosorbide. The company has developed a patented isosorbide production process using sorbitol as a primary raw material. Marketed under the ‘POLYSORB’ brand name, these monomers are witnessing growing adoption in the production of various thermoplastics and curable resins, such as polyesters, polycarbonates, polyurethanes, and epoxy resins.

Liquid sorbitol led the market and accounted for 64.6% share of the overall revenue in 2019. Liquid sorbitol is used as a sugar substitute in the pharmaceutical and food and beverage industries. This product is also used as excipients for humectants in pastes and texturing agents. The rising demand for sugar substitutes in low-calorie food and beverages is expected to have a positive impact on segment growth. 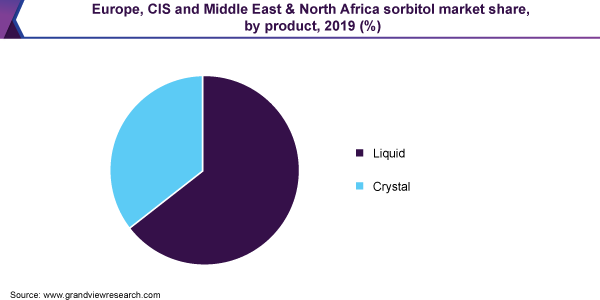 Crystal sorbitol is majorly used as a food additive for the manufacturing of sugar-free products, including chewing gums, mint tablets, and other frozen aquatic products, including roasted fish fillet, frozen raw fish, shrimp ball, and dried squid thread. Rising demand for the aforementioned products is expected to promote the growth of crystal sorbitol over the next seven years.

Crystal sorbitol is also used as a plasticizer in the production of capsule outer shell and as a filler and excipient in the production of pharmaceutical tablets. Moreover, crystal sorbitol is used as a humectant in various cosmetic products, such as face cream and moisturizers, owing to its ability to retain moisture and resistance to bacteriological degradation. Thus, the growing demand for cosmetic products is anticipated to prove beneficial to future sorbitol demand.

Europe held the largest revenue share of more than 80.0% in 2019. The region is anticipated to witness significant growth over the projected time on account of the growing consumer awareness regarding the consumption of nutrition-rich food and beverage items. Consumers in Europe are becoming increasingly aware of healthy lifestyles and are taking more responsibility to ensure the wellbeing of both their mental and physical health.

The growing technological innovation in the nutraceuticals sector offers new opportunities for the dietary supplements market in the European region. The Federation of European Nutrition Societies (FENS) funds and invests in various nutritional foods and nutria-cosmetics businesses, promoting the consumption of dietary supplements, which is expected to drive the demand for the sorbitol over the forecast period.

The CIS region is expected to emerge as the fastest-growing regional market for value-added food products in the years to come. Increasing income of the middle-class population has resulted in changes in the eating patterns, such as the consumption of more meat and poultry products. Increasing demand for ready meals and convenience products due to the rise in urban population is also expected to support the growth of the market.

The prominent market players have been benchmarked based on their distribution networks, product portfolios, innovation, operational capabilities, strategic developments, geographical reach, and the market presence of their brands.

Major market players are engaged in implementing various strategies, such as backward and forward integration, expansion of production capacities, and product portfolios. For instance, in 2015, Roquette Frères announced the launch of its new isosorbide production unit at its site in Lestrem, Pas-de-Calais, France. The unit has a capacity of 20,000 tons per year isosorbide. The company has developed a patented isosorbide production process using sorbitol as a primary raw material. Marketed under the ‘POLYSORB’ brand name, these monomers are witnessing growing adoption in the production of various thermoplastics and curable resins, such as polyesters, polycarbonates, polyurethanes, and epoxy resins. Some prominent players in the Europe, CIS and Middle East and North Africa sorbitol market include:

This report forecasts volume and revenue growth at the regional and country levels and provides an analysis of the latest industry trends and opportunities in each of the sub-segments from 2016 to 2027. For the purpose of this study, Grand View Research has segmented Europe, CIS and Middle East & North Africa sorbitol market report on the basis of product, application, end-use, downstream opportunities, and region:

b. Food & Beverage led the market and accounted for more than 35.8% of the global revenue share in 2019. The growth of the food & beverage industry directly influences the demand for sweeteners including sorbitol. The increasing adoption of various types of frozen foods, confectionery, and dairy products by end-consumers is expected to drive the market.

Who are the key players in Europe, CIS & MENA sorbitol market?

What are the factors driving Europe, CIS & MENA sorbitol market?

b. The key factors that are driving the sorbitol market include rising awareness towards calorie reduction and healthier diets across consumers in key markets such as Germany, France, Italy, and UAE is expected to promote the consumption of dietary foods and beverages over the coming years, thereby also driving the growth of the sorbitol market.