The global functional ingredients market size was valued at USD 64.13 billion in 2019 and is expected to grow at a compound annual growth rate (CAGR) of 6.4% from 2020 to 2027. The market growth is attributed to factors including growing demand for clean label products, shifting regulations in the food and beverage market, and rising awareness among consumers. 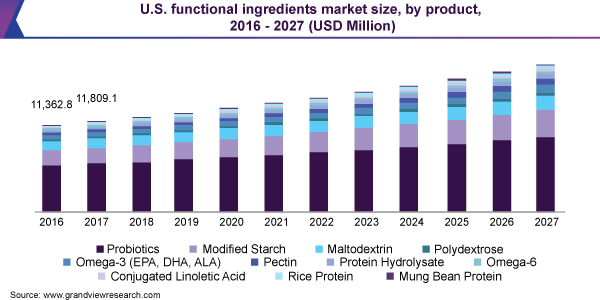 Increasing health concerns and growing health issues like obesity, diabetes, and digestive disorders are the significant factors projected to boost the industry growth in the coming years. New investments and introduction of innovative products by substantial producers have resulted in considerable demand for functional ingredients in the food and beverage industry.

The U.S. probiotics industry is characterized by the presence of demographic-specific probiotics, such as for genders and geriatrics. These niche markets have provided regional players the chance to adopt distinguished strategies to develop their product portfolio and maximize their resources. Excessive demand for probiotics-based food and beverage products is projected to drive the U.S. market over the next few years.

Functional ingredients are those ingredients that have disease-preventing, energy-boosting, and health-promoting advantages. The elements that will be added to the end product are expected to be an extract from a natural source of the active ingredient.

Health awareness among customers across several regions is progressively increasing, thereby enhancing the demand for nutritional foods and beverages. Furthermore, consumers are shifting toward fortified convenience wholesome foods and drinks that are rich in nutritional content. Growing income levels, coupled with increasing number of urban residents, are propelling the demand.

Furthermore, awareness is increasing among the millennial population concerning the adoption of nutritional food items in their dietary regimes. Consumers across the globe are using the advantages of functional ingredients in obesity management. They are broadly utilized in the pharmaceutical application as a coating material since they exhibit decent water solubility, high actual content, and low viscosity.

Probiotics led the market and accounted for 52.2% share of the global revenue in 2019. Probiotic products exhibit a vital growth area within the functional ingredient group and strong research efforts are underway to improve dairy products into which probiotic organisms, such as Bifidobacterium and Lactobacillus species, are integrated.

Such probiotic-based products may adapt to gut microbial composition, thereby developing gut health, for instance, through developed tolerance to lactose in lactose-intolerant persons or acquired resistance to pathogenic bacteria. Rapidly increasing probiotics product segment holds a wealth of opportunities, specifically for those key players that understand and cater to the end consumers.

Rice protein is expected to expand at the fastest CAGR of 8.9% in terms of revenue from 2020 to 2027 because it is increasingly being utilized in various food applications, such as baked food and nutritional beverages, which is projected to have a positive influence on the segment growth over the coming years. Customers have been progressively focusing on nutritional diets that are predicted to increase the demand for rice protein in numerous sports and energy-related dietary products over the forecast period.

Rice protein is used as an alternative to the conventional soy and whey protein isolates. It is produced by separating proteins from the carbohydrates present in brown rice and has a more distinct taste than that of its counterparts present in the functional ingredients market. Rising demand for protein-based nutritional products owing to increasing consumer awareness concerning healthy lifestyles is likely to boost the demand for these products over the coming years.

Food and beverages led the market and accounted for 41.9% share of the global volume in 2019. The global demand for functional ingredients in food and beverages has witnessed a paradigm shift owing to rising health awareness among consumers and nutritional health benefits.

Buyer’s attitude is very positive regarding functional foods with added health and wellness benefits. Rising geriatric population, increasing healthcare costs, changing lifestyle, food innovation, medical discoveries, and expectations regarding their higher prices have aided the overall market growth as well as the product demand. It has been reported that nine out of ten adults consume 55% minerals and over 50% vitamins in their daily diets. 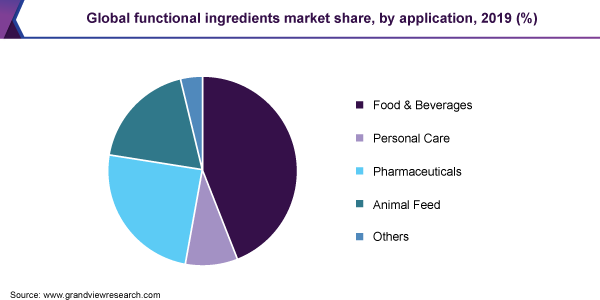 North America dominated the market and accounted for 30.1% share of global volume in 2019. Increasing health concerns and growing health issues, such as obesity, digestive disorders, and diabetes, are significant factors expected to propel the demand for the product in countries, such as U.S., Canada, and Mexico.

Products targeting health and mental well-being have prompted the food industry to increase new food R&D initiatives. Despite the uncertainties of existing regulations, it outlines the context of a rapidly expanding market in major countries, like the U.S. and Mexico. The industry is also expected to grow on account of the changes in food regulations, growing self-care movement, and overwhelming scientific evidence, highlighting the critical link between diet and health.

Asia Pacific is projected to witness the fastest growth in the market over the forecast period. Strong government policies in the agricultural trade to support functional foods and attract market investments have created a broad scope for development in the region. Countries like China, India, South Korea, Taiwan, and Japan rely on agriculture to some extent because the sector is a considerable contributor to their GDPs.

Asia Pacific has one of the largest functional ingredient markets due to the burgeoning population and rising disposable income among consumers. Rapidly growing consumption of processed food, along with increasing awareness regarding health and fitness in developing economies, is a significant factor boosting the functional food market growth in the region.

The market has been witnessing key expansions in application development, product innovation, and others. Such growth and innovations are projected to be the significant parameters for being competitive in this market, with frequent acquisitions and joint ventures being taken by key players in an attempt to expand their product portfolios and gain significant revenue shares.

Companies such as ADM and Royal DSM are investing in the development of newer technologies and expansions, along with raw material producers. Collaborations and agreements are also among the crucial strategies adopted by major players in the industry. Some of the prominent players in the global functional ingredients market are:

This report forecasts volume and revenue growth at the global, regional, and country levels and provides an analysis on the latest industry trends and opportunities in each of the sub-segments from 2016 to 2027. For the purpose of this study, Grand View Research has segmented the global functional ingredients market report on the basis of product, application, and region: