The global industrial enzymes market size was valued at USD 5.6 billion in 2019 and is expected to grow at a compound annual growth rate (CAGR) of 6.4% from 2020 to 2027. Rising product demand from the end-use industries, such as biofuel, home cleaning, animal feed, and food and beverage, is projected to fuel the industry growth over the forecast period. The market is anticipated to be driven by ascending demand for carbohydrase and proteases in the food and beverage applications, especially in the emerging economies of Asia Pacific, such as China, India, and Japan. Moreover, growth in the developed economies can be attributed to increasing industrialization, along with advancements in the nutraceutical sector. Such factors have bolstered the product demand on a large scale. 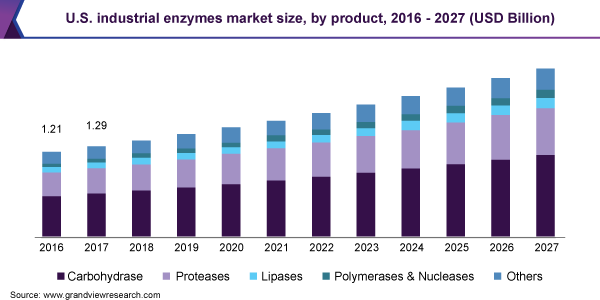 Increasing demand for industrial enzymes from the animal feed and nutraceutical industries is expected to boost the growth of the market. Moreover, consumer awareness regarding health is increasing, which is driving the consumption of functional food products, thereby fueling the product demand in the coming years.

Challenges faced by the industry include high sensitivity of enzymes to temperature and pH and product handling security problems. These factors are anticipated to influence market growth in the near future. However, key players are likely to benefit from the rising acceptance from several end-use industries, such as food and beverages, animal feed, biofuels, and diagnostics.

Carbohydrases led the market and accounted for more than 47.0% share of the global revenue in 2019. Carbohydrase enzymes are utilized in various end-use industries, including pharmaceuticals, animal feed, and food and beverages. Carbohydrases are used predominantly as a catalyst for the conversion of carbohydrates into sugar syrup, including fructose and glucose, which are further utilized in the pharmaceutical and food and beverage industries.

Increasing awareness about declining nutrition levels among consumers has surged global protein consumption, which is expected to increase the demand for proteases in the food industry over the forecast period. In addition, the growth of the pharmaceutical, detergent, and chemical end-use industries in emerging economies, such as China, India, and Brazil, is expected to promote the segment growth over the forecast period.

The micro-organisms segment accounted for more than 80.0% share of the global revenue in 2019. Microorganisms-based enzymes are divided into three types, namely bacterial, fungal, and yeast enzymes. Mushroom-based industrial enzymes comprise phenol oxidases, esterases, and hydrolases. Bacterial enzymes are primarily sourced from Bacillus. The majority of the industrial enzymes are utilized in detergents, pharmaceuticals, and food and beverage sectors. Fungi-based products are a prominent type due to their mounting usage in several end-use industries. Fungal enzymes have multiple uses as they play a substantial role in the production and preparation of various food products, such as beer, soy sauce, dairy items, processed fruits, and baked goods.

Fruits and vegetables are also considered a prominent source of industrial enzymes. Plant-based products are enzyme-rich and can be consumed effortlessly without requiring to be processed or cooked. There is an ascending demand for bromelain since it is used as an anti-inflammatory agent, helps in protein digestion, and is employed in wound debridement. Plant-based are witnessing a rise in demand as they reduce the stress on the small intestine by enhancing the digestion rate.

Animal-based are mainly procured from the pancreas and stomach of cattle and swine. These function entirely within a restricted range of pH levels, which makes them futile in the gut. These enzymes also become unsteady in an acidic (low pH level) environment, resulting in their destruction before the desired function is performed. As a result, animal-based enzymes are delivered in the body inside a protective enteric coating, which is capable of resisting the acidity of the stomach.

Detergents emerged as the second-largest application segment, where amylases, lipases, and proteases are generally used in detergent formulations. Protease enzymes are primarily utilized in laundry detergent applications. They help remove protein stains, including grass, blood, eggs, and human sweat. Amylases are extensively used to eradicate deposits of starchy food products, such as spaghetti, mashed potatoes, custards, gravies, oatmeal porridge, and chocolate. These types of enzymes are utilized in laundry detergents and in chlorine-free dishwashing detergents. Additionally, lipases are majorly used to remove greasy stains, such as salad oil, frying fats, butter, lipstick, tough stains on collars and cuffs, and sauces. 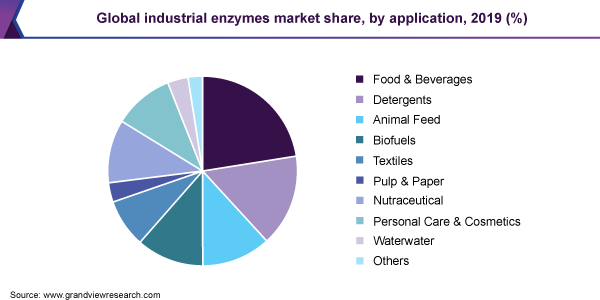 Enzymes also play a prominent role in cellulosic conversion for the production of cellulosic ethanol. The increasing rate of fossil fuel depletion and growing demand for green alternatives are projected to increase the demand for biofuels, which, in turn, is likely to drive the product demand over the forecast period. Enzymes such as lipases, phospholipases, and cellulases are the prominent types used in the biofuel sector.

For instance, enzymes such as phospholipase and lipase play a vital role in biodiesel production. Numerous biodiesel manufacturers have commercialized their biodiesel production with the enzymatic process. From a processing standpoint, lipase converts free fatty acids (FFAs) to fatty acid methyl esters (FAME), while phospholipase converts diacylglycerol, which acts as a substrate for lipase. Such factors are responsible for increasing yield and reducing chemical waste.

North America led the market and accounted for over 35.0% share of the global revenue in 2019. The region is expected to maintain its lead over the forecast period. North America is a prominent regional market for enzymes due to the strong presence of several end-use industries, such as food and beverage, pharmaceuticals, laundry detergent, and personal care and cosmetics, along with high scope for research & development activities in the major countries of the region.

Europe emerged as the second-largest consumer as it is one of the major producers of medicinal, pharmaceutical, and cosmetics products. The presence of major pharmaceutical and cosmetic companies, such as Novartis AG, Sanofi, Hoffmann-La Roche Ltd., GlaxoSmithKline plc., AstraZeneca, Bayer AG, Novo Nordisk A/S, Merck KgaA, Unilever, L’Oréal, New Avon Company, Beiersdorf, and Henkel AG & Co., in the region is expected to propel the demand for enzymes.

The growing population and rapidly developing textile industry in the region are expected to fuel the demand for enzymes in textile processing. Furthermore, Europe is a hub for manufacturing automobiles, rail coaches, and aerospace equipment and aircraft. Thus, the manufacturing sector in the region is expected to witness substantial growth in the future, in turn, stimulating the product demand in wastewater treatment over the forecast period.

The global market is oligopolistic due to the presence of three dominant players: BASF SE, DuPont Danisco, and Novozymes. Manufacturers are thus focusing on adopting modern and environmentally safe technologies to customize the product, enhance its properties, and differentiate the final product from its competitors.

Novozymes, a prominent market player, is dedicated to central enzyme manufacturing. However, manufacturers including DSM and DuPont Danisco have shifted their focus toward the impression of on-site enzyme manufacturing. Biofuel manufacturers are able to reduce the addition of stabilizing agents, downstream processing, and shipping and warehousing of bulk quantities of enzymes when they are produced on-site. Some of the prominent players in the industrial enzymes market include:

This report forecasts revenue growth and provides an analysis of the latest industry trends and opportunities in each of the sub-segments from 2016 to 2027. For the purpose of this report, Grand View Research has segmented the global industrial enzymes market report on the basis of product, source, application, and region:

How big is the industrial enzymes market?

What is the industrial enzymes market growth?

Which segment accounted for the largest industrial enzymes market share?

b. North America dominated the industrial enzymes market with a share of 37.38% in 2019. This is attributable to the strong presence of several end-use industries such as food & beverage, pharmaceuticals, laundry detergent, and personal care & cosmetics.

Who are the key players in industrial enzymes market?

What are the factors driving the industrial enzymes market?

b. Key factors that are driving the industrial enzymes market growth include increasing demand from food & beverage along with growing product penetration in the animal feed sector.