The global metal cans market size was estimated at USD 46.98 billion in 2015, growing at a CAGR of 2.4% from 2016 to 2020. Factors such as their environmental benefits, increasing surge for canned products, and fast recycling rate are expected to show a positive influence on the metal cans industry over the forecast period.

The product is gaining prominence due to its distinct features such as a hermetically sealed cover, resistance to transportation and irregular handling, and easy recyclability. The aluminum and steel sheets are the primary raw material for the manufacturing of the product. Major suppliers of the raw materials (aluminum & steel) include UC Rusal, ArcelorMittal, Alcoa, Hydro, and Chalco. 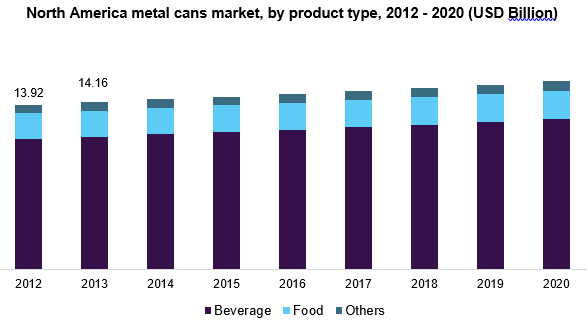 The Association of Packaging and Processing Technologies and Packaging Machinery Manufacturers Institute (PMMI) predicts that the food sector in the U.S. is likely to grow at a CAGR of nearly 1.4% from 2016 to 2020. The snack food segment is likely to drive the demand for the product as the segment widely uses recyclable material for single-serve packs.

Factors such as fluctuating raw material prices and lack of microwaveable capability in comparison to other alternatives such as paper and plastic are expected to hamper overall industry growth. Product differentiation and the use of eco-friendly products and practices could also provide immense opportunities for market growth.

The various coating technologies used in the manufacturing of the product include high-solid coatings, waterborne coatings, powder coatings, ultraviolet radiation-cured coating, and conventional solvent-borne coating. The purpose of the coating is to protect the product from abrasion and rust, reduce friction, and provide improved handling.

The U.S. Environmental Protection Agency (EPA) has specified guidelines for the vendors of the industry to limit Hazardous Air pollutants (HAP) emissions during surface coating operations. The standards state the application of the maximum achievable control technology (MACT) during the surface coating operations. The common type of HAP released by the manufacturing facilities includes methyl isobutyl ketone (MIBK), hexane, glycol, and xylenes.

Beverage metal cans emerged as the largest used product, accounting for 79.6% of the market share in 2015. The segment is expected to gain momentum owing to increasing carbonated soft drinks (CSD), beers, and fruit juices demand. Moreover, aluminum is increasingly preferred by beverage manufacturers due to its recyclable property and cheap price as compared to polyethylene terephthalate (PET) and polycarbonate bottles. 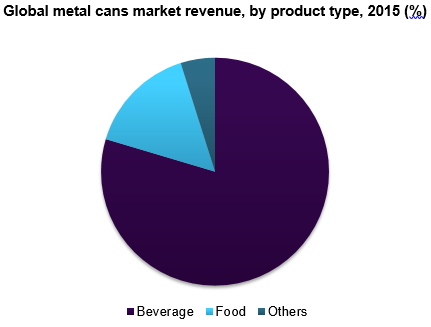 Food metal cans emerged as the second most consumed product, accounting for 15.5% of the market share in 2015. Metal cans offer advantages including long-term preservation and high-temperature sterilization for food packaging. However, the corrosion effect associated with tin when in contact with acidic fruits and foods is expected to restrict food metal cans industry growth in the near future.

Food metal cans are exclusively used for the packaging of fruits, vegetables, soups, noodles, and meat for a longer time duration by inducing long shelf-life. Mostly, steel and aluminum alloys are used as a metal for the packaging of fruits and vegetables. Growing global frozen and canned food demand is expected to propel the demand for food metal cans as a preservation medium over the forecast period.

North America emerged as a dominant region in 2015, accounting for 31.2% of the total revenue share. The growing consumption of beer and other alcoholic beverages is likely to propel the regional industry in the forecast period. Growing frozen and canned food consumption in the U.S. is expected to drive market growth over the forecast period.

North America and Europe are expected to lose their market shares to the Asia Pacific owing to emerging markets such as India and China coupled with China contributing to a major chunk of global beer consumption. In addition, growing meat consumption in China is expected to further augment market growth over the forecast period.

Europe was the second-largest region in 2015 accounting for 30.4% of the revenue share. Growing beer consumption coupled with the European Commission’s initiatives pertaining to recycling of chemicals and metals is expected to propel the metal cans industry growth over the forecast period.

The Asia Pacific is expected to witness the fastest growth over the next five years. Increasing disposable income, availability of a wide range of beer at varying costs, and the influence of western culture is expected to augment beer demand in Asia. In addition, growing beer consumption by the younger population is likely to be one of the primary factors contributing to the rise in beer consumption in the region.

The global industry is fragmented with a large number of domestic companies focusing on regional markets. The majority of the companies have established exclusive agreements with distributors to cater to end-users. Some companies have their own distribution networks, thus increasing their revenues by distributing products to independent manufacturers.

Vendors have sales and distribution offices situated in different regions facilitating market presence and increasing customer base. Metal cans are being increasingly used for applications such as food and beverage packaging. As a result, multinational beverage companies such as The Coca-Cola Company, PepsiCo, and Red-Bull are major customers of the market.