The global pigment dispersion market size was valued at USD 23.1 billion in 2021 and is expected to expand at a compound annual growth rate (CAGR) of 4.3% from 2022 to 2030. The steady growth in the packaging industry, in terms of both food and non-food packaging and printing of labels, is expected to drive the demand for pigment dispersions during the forecast period. 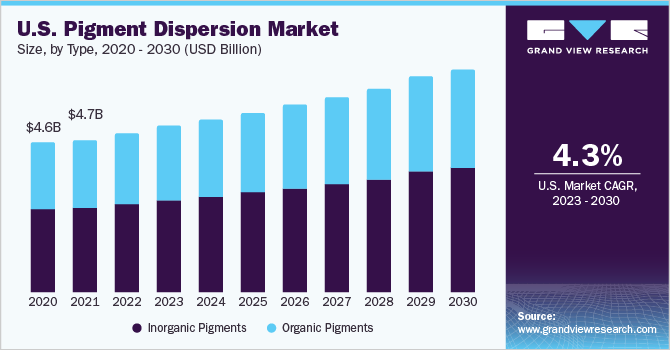 Polyethylene terephthalate (PET), polypropylene (PP), and polystyrene (PS) are the most preferred polymers in the single-service food packaging segment. Factors such as the increasing use of plastic and paper & paperboard materials and the use of various colorants to make attractive packaging are expected to drive the overall pigments demand.

Titanium dioxide is the most widely used inorganic pigment on account of its non-toxic content, chemical stability, and versatile properties for use in plastic and paper & paperboard food packaging. Zinc oxide is a synthetically produced pigment and is considered to have a lesser toxic effect on humans. Currently, titanium dioxide, iron oxide, and zinc oxide account for the maximum share of the global pigment demand for plastic and paper & paperboard food packaging applications.

The inorganic product segment led the market and accounted for more than 56.5% share of the global revenue in 2021. Inorganic pigment dispersion is derived from inorganic compounds such as chromates, sulfates, and metal oxides by various chemical formulations. Inorganic pigment dispersion is used in various applications, including plastics, paints & coatings, and printing inks, among others.

The coatings application segment led the market, accounting for more than 39.0% share of the global revenue in 2021. The growing building & construction industry on account of infrastructure development in many economies such as the U.S., China, India, and Saudi Arabia, among others is expected to drive the demand for coatings during the forecast period, thus boosting the growth of the pigment dispersion market in the coming years. With the growing demand for green building construction, organic pigments used in coatings are also anticipated to witness a considerable increase in demand.

Pigment dispersion has widely substituted dyes in printing ink applications as the former provides better coloring to the printing ink, thereby offering the intended result to printing ink manufacturers. Inks that are made from dyes are composed of a colorant that is completely dissolved in a carrier fluid, whereas pigment dispersion-based printing inks consist of fine solid particles that get suspended in the carrier liquid. These inks employ both organic and inorganic pigment dispersions; however, the percentage use of the latter is comparatively high owing to its low price and better dispersion capabilities. 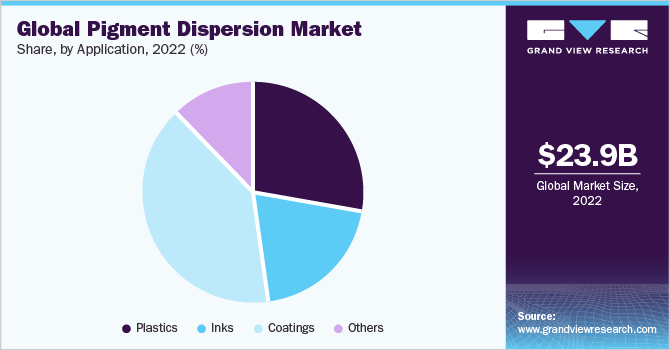 The increasing consumption of plastic in various end-use industries, including construction, automotive, medical devices, and electrical & electronics is expected to drive the demand for pigment dispersion during the forecast period. Plastics are being used in construction applications such as floorings, high-performance safety windows, insulation materials, storage tanks, roofing, pipes, domes/skylights, cables, and doors. A moderate scope for growth is presented by such an evolving market.

Epoxy and polyurethane formulations are used in various floorings that require pigment dispersion to offer decorative and functional colors. Pigment dispersion is used in rubber applications for coloring rubber sheets, tire side walls, and surgery equipment in the medical industry.

Asia Pacific dominated the market and accounted for more than 40.0% share of the global revenue in 2021. The high share is attributable to the availability of raw materials in abundance and the presence of low-cost labor, thus attracting manufacturers from various industries to set up their production facilities in the Asia Pacific region to derive increased benefits. In South Korea, the coatings application segment is expected to contribute a maximum share to the overall pigment dispersion market growth during the forecast period.

The growing infrastructure activities and increased spending from the government on public infrastructure development are anticipated to drive the South Korean market for pigment dispersion. In addition, macroeconomic factors such as low unemployment rate and high disposable income in South Korea are stipulated to propel the demand for pigment dispersions in packaging applications for various end-use industries, such as food & beverage and consumer goods.

For instance, according to the FDA, materials that are permissible for use as food colorants are allowed to be used as coloring agents for food packaging and printing inks. However, pigments containing polynuclear aromatic hydrocarbons and benzopyrene, exceeding 0.5 parts per million and 5.0 parts per million, respectively, are prohibited from application in food packaging.

The global market for pigment dispersion is fragmented in nature and major players are engaged in product development, strategic partnerships, mergers & acquisitions, and joint ventures to vertically integrate across the value chain, reducing the operational cost to have more profit margins. For instance, in March 2019, BASF SE partnered with Landa Labs to introduce its second stir-in pigment eXpand! Blue (EH 6001), sold under the Colors & Effects brand. eXpand! Blue (EH 6001) is used in automotive coatings and outdoor coating applications.

Additionally, in December 2018, Organic Dyes and Pigments acquired Premier Colors, Inc. to expand its business in Providence by catering to the customers of the latter. Premier Colors, Inc., located in South Carolina, U.S., is engaged in the supply of pigment dispersions and specialty chemicals to paper, textile, paints & coatings, and leather end-use industries. The major companies operating in the global pigment dispersion market include

This report forecasts revenue and volume growth at global, regional & country levels and provides an analysis of the latest industry trends in each of the sub-segments from 2019 to 2030. For the purpose of this study, Grand View Research has segmented the global pigment dispersion market report on the basis of product, application, and region

How big is the pigment dispersion market?

What is the pigment dispersion market growth?

Which segment accounted for the largest pigment dispersion market share?

b. Asia Pacific dominated the pigment dispersion market with a share of more than 40% in 2021. This is attributable to the rising demand for pigment dispersion in sustainable packing products in the food & beverages, and consumer goods end-use industry.

Who are the key players in the pigment dispersion market?

What are the factors driving the pigment dispersion market?

b. Key factors driving the pigment dispersion market growth include increased consumer preference for brightly packaged food products and the growing use of plastic & paperboard materials for food packaging.