The global test benches market size was valued at USD 1.14 billion in 2019 and is expected to expand at a CAGR of 4.8% from 2020 to 2027. Increasing adoption of test benches in various industrial applications, such as automotive and transportation, power generation and utilities, semiconductor and electronics, and industrial manufacturing, is expected to spur the growth of the market over the forecast period. 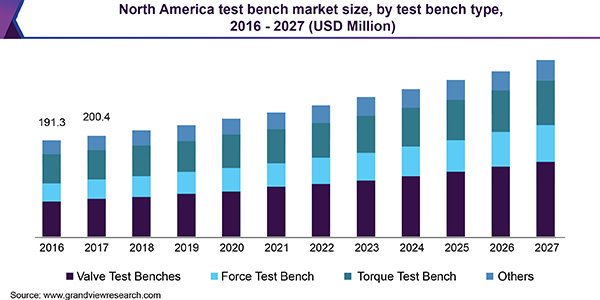 Test benches help the manufacturers to tailor products to certain performance requirements before installation and commissioning them. The testing benches also help to improve the performance of these products in the field. These factors are expected to drive the demand for test benches.

Test benches help the manufacturers to ensure the quality, increase the lifespan of the product, and understand the limitation of the components. The testing of products during the research and development phase and re-testing before delivery helps in decreasing the number of problems associated with the quality of the product. Testing benches also help to accelerate the advancement cycle and enhance productivity and cost-efficiency. This is anticipated to drive the product demand.

Usage of test benches in the electronics industry enables manufacturers to test and analyze the circuit boards and other electronic elements before assembling. The test benches conduct an assembly line testing of semiconductors, electronic circuit boards, electrical devices, instruments, and machines. In addition, a PC-based test bench with fully automated instruments is designed for the testing of sensors. Besides, the electronic devices are manually tested using the tools for measurement and manipulation, which include multimeters, wire cutters, oscilloscopes, and soldering irons.

Verification of the device-under-test in manufacturing units, oil and gas companies, and power plants is also projected to fuel the market growth over the forecast period. In Asia Pacific, China and India are expected to expand at a relatively higher CAGR during the forecast period. The growth of the market in these countries can be attributed to the increasing production of electronic devices and automobiles. Besides, Germany is the hub for the manufacturing of test benches. The companies are focusing on the innovation of the new products as well as customizing the products as per the customer demand.

The hardware segment held the largest market share in 2019 and is expected to maintain its lead over the forecast period. The hardware plays a significant role in testing the equipment, machines, and instruments and is hence of paramount importance. Hardware components consist of benches and a stimulus generator that is connected to the device-under-test in order to generate a set of synchronized waveforms. Furthermore, the result analyzer provides the information that the results obtained are correct or not when the design is simulated with the appropriate test bench. The demand for the hardware is vast as compared to the software segment. An increasing number of innovations in various industrial applications is anticipated to propel the demand for the hardware test bench over the next few years.

Based on the test bench type, the global test benches market has been segregated into valve, force, torque, and others. The valve test benches dominated the market with more than 36% share in 2019 and are expected to maintain their lead over the forecast period. The growth of the segment is attributed to the increasing adoption of valve testing benches by the oil and gas industry in order to regulate the flow rate of the fluid in the pipelines. These benches are suitable for testing screwed relief valves at a pressure of up to 1000 pounds per square inch (psi) and ideal for a high-volume production environment.

The torque test benches are expected to witness considerable growth over the forecast period. Torque measuring systems are widely used in the efficiency measurements of electric motors, hydraulic motors, electric screwdrivers, gearboxes, impulse pumps or screwdrivers, and pneumatic screwdrivers. They are also used to measure the angle of rotation and torque in the material sample.

The manual test stands segment is expected to exhibit considerable growth over the forecast period. The segment accounted for more than 36% share in the year 2019. These testing benches are used explicitly for small sample testing under compression or tensile applications. Manual test stands enable simple force testing when the budgets are limited. Inaccuracy observed in the manual testing machines is expected to affect the growth of the segment.

Based on test material, the market has been further segregated into the valve, motors, furniture, and others. The valve segment dominated the market in 2019 and accounted for a share of more than 37%. The test benches are used to verify the calibration of valves as these valves are widely used in industrial processes and manufacturing operations, which is expected to boost the segment growth. Besides, safety valves and industrial valves play a vital role in the safe operation of the processes and are essential elements in the process control. The benches are utilized for the regular inspections of the safety valves in order to maintain their safety performances as per the required plant prescriptions, which is another factor enhancing the growth of this segment.

The motors segment is estimated to register the highest CAGR of more than 6% over the forecast period. Testing benches are widely used for controlling the speed of the electric motors. Increasing sales of electric motors, especially across North America and Western Europe, are expected to drive the segment. Motor inspection tests are conducted by the motor manufacturers, which determines whether every assembled motor is mechanically or electrically compliant with standards.

The automotive and transportation segment dominated the market in 2019. Rising consumer preferences for advanced vehicles, such as autonomous cars, self-driving cars, and connected cars, are resulting in an increase in the number of automotive manufacturing units. Increasing demand for automotive components is expected to fuel the growth of this segment. Besides, the commercialization of advanced products to reduce the complexity and weight of the vehicles has increased the sales of the vehicles. This is estimated to boost the segment growth. In addition, government initiatives regarding connected and autonomous vehicles are expected to impact the segment growth positively. For instance, in the year 2019, the Government of the U.K. has invested USD 35 million in the development of connected and autonomous vehicles. 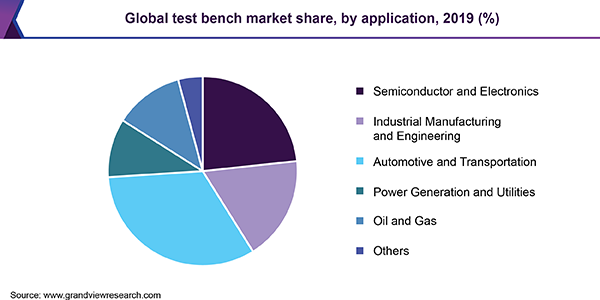 The semiconductor and electronics segment is estimated to expand at a CAGR of 4% over the forecast period. Electronic components such as electronic circuits and batteries are tested on a bench using numerous pieces of testing equipment. The testing of these components is done by the equipment, such as an oscilloscope, signal generators, and logic analyzers, in order to check whether the device is correctly manufactured or not. Furthermore, automated test-benches are used to validate the robustness of various mobile applications and advance the overall development cycle of these applications. These factors are expected to fuel segment growth.

Asia Pacific dominated the market in terms of revenue in 2019 and is estimated to maintain its lead during the forecast period. The region is expected to expand at a CAGR of more than 4% from 2020 to 2027. Countries such as China and India are generating the highest revenue and are expected to witness the highest growth in the next few years. China held the largest market share in 2019 in the region as it stands as the largest producer of semiconductors, vehicles, and power generation, which results in the demand for testing benches. Increasing usage of these benches by industries, such as electronics and oil and gas, is also driving their demand in the region.

Europe accounted for more than 23% share in the year 2019. It is expected to exhibit the highest CAGR during the forecast period owing to the presence of several manufacturers of test benches, such as Robert Bosch GmbH and Nidec Industrial Solutions. Germany is home to many test bench manufacturers, such as MCD Elektronik GmbH and Blum-Novotest. Countries such as Germany, the U.K., and Italy are expected to exhibit considerable growth owing to rising research & development endeavors by the manufacturers in order to improve the quality of the product.

Some of the prominent industry players are Robert Bosch GmbH (Germany); AMETEK Sensors, Test & Calibration (U.S.); Blum-Novotest (Germany); IAG Industrie Automatisierungsgesellschaft m.b.H. (Austria); Mark-10 (U.S.), FuelCon AG (Germany); Nidec Industrial Solutions (Italy), and ATEQ (U.S.). These companies accounted for a significant share in the global market in 2019. The prominent market players are significantly investing in the research and development activities to develop innovative testing benches that help in testing the equipment in order to meet the growing demand of the end customers.

For instance, in September 2018, Robert Bosch GmbH announced the launch of DCI 700 diesel test bench for the injector technologies, which allows reliable and accurate testing of common rail injectors for commercial vehicles and cars. It is also used to test the injectors equipped with injection control systems, including Valve Closing Control (VCC) or Needle Closing Control (NCC).

This report forecasts revenue growth at the global, regional, and country levels and provides an analysis of the latest industry trends and opportunities in each of the sub-segments from 2016 to 2027. For the purpose of this study, Grand View Research has segmented the global test benches market report on the basis of component, test bench type, test stands, test material, application, and region:

How big is the test benches market?

What is the test benches market growth?

Which segment accounted for the largest test benches market share?

b. Asia Pacific dominated the test benches market with a share of 28.1% in 2019. This is attributable to the largest producer of semiconductors, vehicles, and power generation, and increasing usage of these benches by industries such as electronics and oil and gas in the region.

Who are the key players in test benches market?

What are the factors driving the test benches market?

b. Key factors that are driving the market growth include increasing adoption of test benches in various industrial applications and verification of the device-under-test in manufacturing units, oil & gas companies, and power plants.