The U.S. maleic anhydride market size was valued at USD 372.7 million in 2018 and is projected to expand at a CAGR of 6.7% from 2019 to 2025. Rising demand for unsaturated polymer resin (UPR)-based composites in the construction industry is expected to drive the U.S. market over the forecast period.

The economic recovery in the U.S. has led to a rise in infrastructural activities in the country. High demand for UPR and additives in building and construction, coupled with technological advancements, has driven the market. In addition, an upturn in the lubricants market in recent times is expected to factor in maleic anhydride demand due to its increasing consumption as a lubricant additive. 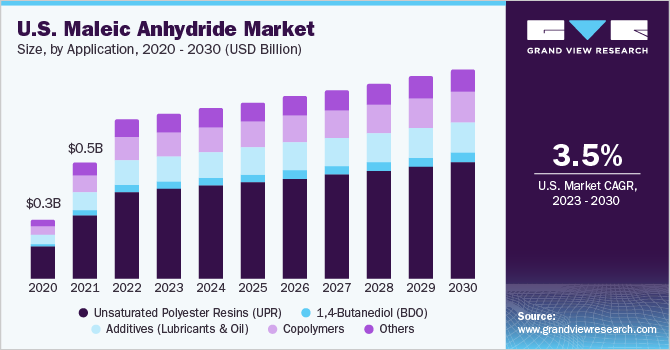 Industry initiatives in the U.S. are hinting at a positive future for maleic anhydride. For instance, INEOS Enterprises completed its acquisition of the chemical intermediates business of Flint Hills Resources. MFG Chemical is upgrading its plant in Pasadena, Texas, U.S. through debottlenecking and addition of new capacity. Such initiatives are expected to boost the market. However, the bullish sentiment is expected to persist as long as the trade war is not resolved.

The price dynamics of maleic anhydride are controlled by the prices of butane. The downward price trend of butane and slow growth in end-use industries are expected to pose a major challenge to product manufacturers. The trade war with China has pressurized manufacturers, who are now looking at exporting the product to other countries. Industry activities are also indicating stable future prices as the market for maleic anhydride is experiencing a lot of new investments. Expanding natural gas plants can also play a major role in controlling the prices of butane, which can provide well-needed stability to the market.

The growing housing industry in the U.S. is expected to support the growth of UPR-based products as they form an essential component of building products. Improving labor situation, coupled with rising disposable incomes, is expected to boost demand for maleic anhydride in the manufacturing of UPR. The home equity wealth aggregate that represents homeowners in the country has risen by USD 10 trillion in the last 10 years.

Maleic anhydride is mostly used in the solid form in the U.S. These are majorly used in the production of unsaturated polymer resins, which have high demand in major end-use application industries such as housing and automotive. The solid type is the largest product form segment and was valued at USD 286.7 million in 2018. 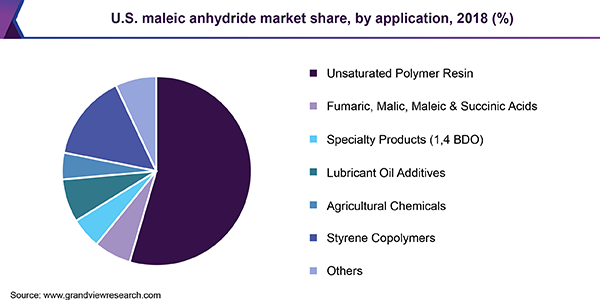 Fumaric acid and succinic acid are also used as a food additive and in the manufacture of medicines and alkyd resins. However, fumaric acid produced from maleic anhydride has a lower preference owing to its natural availability in bolete mushrooms, lichen, and Iceland moss.

The market is characterized by several multinational large-scale and small-scale manufacturers catering to different market segments such as chemical, agrochemical, and industrial manufacturing. The top players have been dominating the market with more than 50% of the total revenue. Huntsman, Lanxess, INEOS (Flint Hills Resources), and BASF are the major manufacturers in the market. Companies have been focusing on application-specific products to cement their positions within the marketplace. For instance, Solid State Chemicals, which was established in 2013, only manufactures solid maleic anhydride.

This report forecasts revenue growth at country level and provides an analysis of the latest industry trends in each of the sub-segments from 2014 to 2025. For the purpose of this study, Grand View Research has segmented the U.S. maleic anhydride market report on the basis of product form and application: