The global oleochemicals market size was valued at USD 19.10 billion in 2018. Growing biodegradable products demand in various consumer applications such as personal care, detergents, food & beverages, and petrochemicals is expected to remain a significant factor driving growth over the next seven years.

Favorable government policies regarding tax benefits and financial incentives for bio-based chemical producers are impacting the industry growth positively. The application development coupled with product innovation will yield potential opportunities for companies operating in the industry over the forecast period. 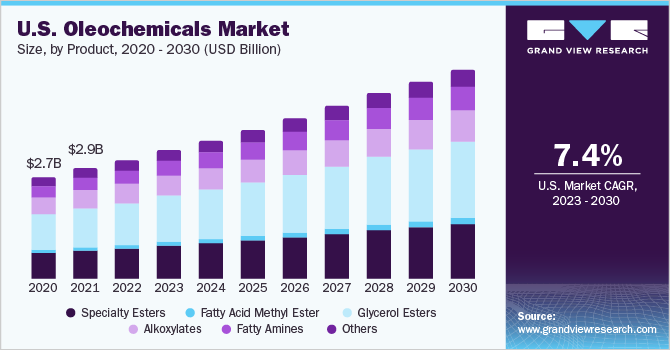 Escalating supply-demand gap along with overcapacity issues primarily in the Southeast Asian countries such as Indonesia and Malaysia will continue to remain a critical concern for industry participants. The growth in biodiesel sector in the U.S. will positively influence the oleochemical demand, which will lower the product prices for biodiesel sectors.

Oleochemicals are used in wide range of applications including personal care, surfactants, soaps, food additives, and detergents. The key chemical manufacturers including Arkema, Lanxess, BASF, DSM, Solvay, and DuPont have shifted their focus towards using bio-based chemicals for manufacturing polymers. This trend is projected to positively influence the companies involved in developing the downstream potential of various oleochemicals such as alcohols, fatty acid esters, and glycerol.

Major chemical manufacturers have increased their spending on sustainable development owing to responsible care initiatives which includes the elimination of toxic chemicals which prompted a shift in trend towards biodegradable and renewable products. Manufacturers have taken a realistic approach to replace petrochemicals by bio-based chemicals in an attempt to minimize the reformulation and re-equipping time and cost.

The increasing bio-diesel demand may cause a hike in biofuel prices which are mostly affected by changes in the government regulations and blending norms. These factors are expected to affect the overall economics of oleochemical-based products and hinder growth.

The raw materials used for manufacturing oleochemical include vegetable and animal oils & fats are derived from petrochemical feedstock. The polyols, which are key feedstock for polyurethane production can also be produced using oleochemical routes which are anticipated to steer growth in the near future.

Oleochemical derived from vegetable oils, such as soybean oil, castor oil, and linseed oil, are used to develop polyamides which are widely used in automotive and textile applications. The high rate of commercialization of bio-based polyamide in the above applications is further anticipated to stimulate product demand over the forecast year.

Easy availability of feedstock and rapid expansion of major end-use industries drives the global oleochemical market trend over the next seven years. Indonesia and Malaysia are the major producers of base products for oleochemical. Asia Pacific along with being the largest consumer is also the largest producer of oleochemical and accounts for over half of the global production.

The presence of a large number of domestic manufacturers in Southeast Asian countries such as Malaysia and Indonesia coupled with high demand in the local markets has been a major factor driving the regional oleochemicals market share. Government support in terms of tax benefits particularly in the emerging markets of China and India with an aim of promoting manufacturing biodegradable chemicals are projected to complement the growth in the sector.

Fatty acids emerged as the leading product category and accounted for over 55% of the overall demand in 2017. Growing fatty acid application in personal care and soaps & detergents industry will increase the fatty acid demand in next seven years. Asia Pacific fatty acid market in soaps and detergents was valued at USD 1,642.6 million in 2018.

The global fatty alcohol industry has observed significant capacity additions over the past decade particularly in South-East Asia and Western Europe owing to its growing demand in lubricants, soaps & detergents, and personal care in other downstream chemical industries.

Glycerol is anticipated to witness the fastest growth over the next seven years on account of growing demand as an important ingredient in various food & beverages, personal care and detergents products. The European glycerol segment is anticipated to grow at an estimated CAGR of 5.3% in terms of revenue.

Glycerin derivatives such as glycerol monostearate have gained prominence in the wide range of food & beverage applications including confectioneries, bakery, and protein drinks. Food & beverage is anticipated to emerge as the highest growing glycerol application growing at a CAGR of 7.7% to reach a net worth exceeding USD 429.3 million by 2025 globally.

Asia Pacific was the leading consumer and accounted for over 40% of the total oleochemical market share in 2018. In addition to be the largest consumer, the region is also the leading producer of oleochemicals. The presence of a large number of domestic manufacturers in Southeast Asian countries such as Malaysia and Indonesia have been a major factor driving the regional demand. 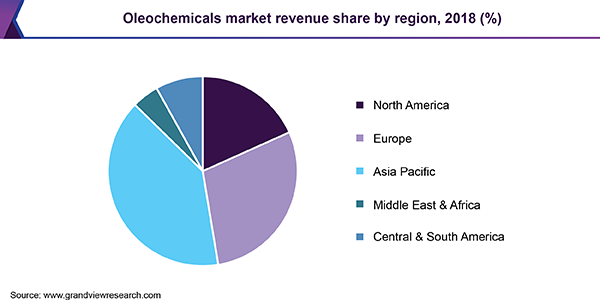 Large Asian plantation firms have invested in downstream chemical capabilities to restrict oleochemical overcapacity in the region and to win over reduced profitability. For strengthening Asia as a major hub for downstream products and base oleochemicals, these plantation companies have also teamed up with chemical companies in the last few years.

The shifting consumer focus for natural products and manufacturers relying on natural chemicals to produce oleochemicals will bolster the consumer demand for these products in the years to come. Increasing growth of end-user industries such as pharmaceuticals and personal care in the U.S. is also anticipated to enhance the product demand in the country.

Oleochemicals market in Europe is projected to witness considerable growth over the forecast period. Growing importance for biodiesel as an alternative to petroleum-based fuels has been a major factor driving the industry growth in the region. Fluctuating petroleum prices and favorable policies such as blending norms are expected to drive the biodiesel demand, which in turn is expected to positively impact the European market over the next seven years.

The Middle East and Africa market has a huge unexplored agricultural potential in the region which can be used for the raw material cultivation. The palm oil market in the region is expected to experience brisk growth in application like food and other industrial segments. Also, bio fuels offer a new potential for the African countries to improve the employment & economic scenario and contribute towards growth in rural income.

Manufacturers have taken a realistic approach to replace bio-based chemicals from petrochemicals in an attempt to minimize the re-equipping and re-formulation time and cost. The market has significant opportunities for diversification and had witnessed a large number of mergers and acquisitions by industry participants over the past few years to increase the market share.

Globally, the markets into which oleochemical producers supply are very focused, with few powerful lead firms controlling a large share of the market. Procter and Gamble (P&G), Unilever, Johnson and Johnson, and Colgate all have strong shares of the overall industry—over 5% each in the personal care and household products markets

The market has immense potential for new entrants and established manufacturers. The existing companies can explore the oleochemicals and derivatives based on the feedstock, either by forward or backward integration which will allow these firms to manufacture downstream products that add value to their existing process.

The significant integration across the raw materials suppliers for manufacturing oleochemicals has further intensified the industry competition. Over 60% of fatty acid and 25% of fatty alcohol capacities are owned by raw material suppliers globally, this has led to increased profit margins and meeting economies of scale.

This report forecasts volume and revenue growth at global, regional & country levels and provides an analysis of the industry trends in each of the sub-segments from 2014 to 2025. For the purpose of this study, Grand View Research has segmented the global oleochemicals market on the basis of product, and region:

Raw material supply for the oleochemical production has disrupted due to the full lockdown situation in India, Malaysia, and Singapore, which are the leading producers of vegetable oils. Despite this, oleochemicals manufacturers are striving to meet the demand from surfactant and cleaning products manufacturers.