The global recycled ocean plastics market size was valued at USD 1.55 billion in 2021 and is expected to expand at a compound annual growth rate (CAGR) of 7.4% from 2022 to 2030. The collection and recycling of ocean plastic debris are quickly expanding across the world, as numerous non-profit groups and government agencies develop and scale up the technology to clear the seas of plastic. This factor is expected to contribute to the growth of the industry in the forthcoming years. 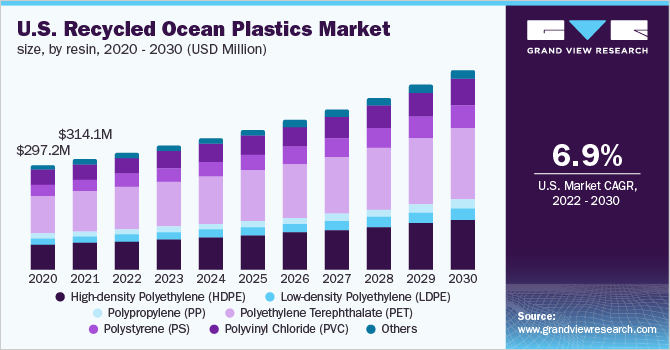 The U.S. plastic waste generation has increased significantly to forty-two million metric tons of plastic waste a year, which amounts to 130 kg of waste for every person. This is more than the amount of waste produced by all European Union member countries combined. Also, the U.S. produces two to eight times more municipal waste than similar countries around the world. Recycling capacity is not on par with a huge increase in plastic waste in America.

Also, the ban on imports of plastic waste by countries like China and Indonesia increased the plastic waste in the U.S. Dumping, littering, and improper waste disposal in landfills have resulted in 2.2m tons of plastic including packaging, plastic bottles, and straws that leak into the environment each year. The total waste can be even higher because of the lack of data and inefficient tracking of plastic waste. Most of this plastic waste finds its way into the world’s oceans through streams and rivers.

According to United Nations Environment Programme (UNEP) research, plastic accounts for 85% of all marine trash. By 2040, 23-37 million metric tons of garbage will be introduced to the ocean each year, tripling the quantity of plastic waste in the oceans. As a result, all marine species, from plankton and shellfish to birds, turtles, and mammals, are at risk of toxicity, asphyxia, behavioral disruption, and hunger.

The human population is also vulnerable as plastics enter the human body through water, seafood, and even common salt. They are inhaled and also penetrate the skin when suspended in the air. In water sources, this type of pollution can cause hormonal changes, abnormalities, developmental disorders, and even cancer. Plastic pollution also has significant consequences for the global economy. It can also lead to a rise in illegal international and domestic waste disposal. Annually an estimated eight million tons of plastic are dumped into the sea, which will result in more plastic waste in the oceans than fish by 2050.

PET is critical as it is commonly used for packaging and can have a substantial influence on the economy's and the environment's sustainability. Light causes polyethylene Terephthalate PET plastics to break down further into tiny fragments over time. These pieces are hazardous to marine species, causing fish and other animals to get unwell. When these fish are captured and consumed, our bodies absorb all of the concentrated toxins contained in the plastics.

The macroplastics segment accounted for the largest revenue share of 48% in 2021. Microplastics are one of the main sources of marine plastic pollution and have direct negative effects on human livelihood and ecosystem health. Earlier macroplastic field observations used to be done using simple methods, such as visual counting or net sampling.

But now drones are used to detect plastic waste in complex geographies and unsafe areas, such as mangrove forests and river mouths. Using a combination of artificial intelligence and (multispectral) camera imagers, automated monitoring can be done. Remote sensing imagery is used in the most remote places to detect plastic debris.

Secondary microplastics are formed by the breakdown of macro plastics through weathering after entering the environment and include soda and water bottles, plastic bags, and fishing nets.  Thirty-five percent of all microplastics in oceans come from textiles, mainly due to the erosion of acrylic, polyester, or nylon-based clothing during the washing process.  Microplastics also accumulate in the terrestrial and air ecosystems.

Plastic bottles accounted for 43.8% of the revenue share in 2021 since more than 35 billion bottles are discarded in the ocean each year. Our coastlines and waterways are littered with plastic bottles and lids. Despite being recyclable, far too many winds up in landfills or the seas. In the sea, they float on the surface or break up into small pieces. Seabirds will mistake bottles or their lids for food, and animals of all sizes will accidentally eat the plastic pieces.

Plastic bags are one of the worst killers of sea creatures. They can readily escape and float over great distances in air and water. Small creatures, gulls, and even turtles become entangled and drown as a result. Turtles mistake them for jellyfish, their favorite meal. Once consumed, these soft plastics plug into their stomachs, causing them to starve. According to new studies, plastics like these even smell like food to turtles. Plastic resins present in the water trap bacteria and algae, causing them to emit food-like odors, a process known as biofouling.

The apparel segment accounted for the largest revenue share of 41.6% in 2021, as a large number of companies are developing Resin from ocean plastics. For instance, In October 2020, The Ocean Cleanup launched the first Resin The Ocean Cleanup sunglasses. These sunglasses were made from plastic collected from the Great Pacific Garbage Patch, designed in California by Yves Béhar, and made in Italy by Safilo. 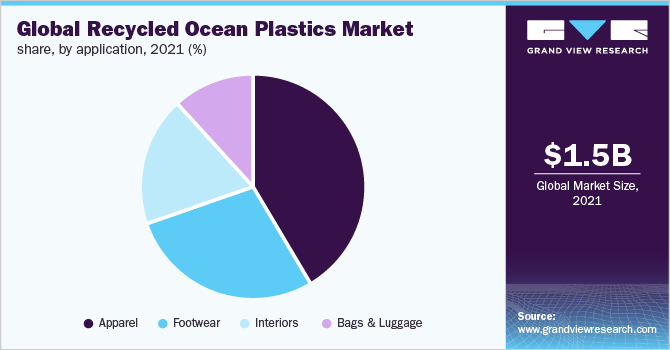 Footwear was the fastest growing segment in 2021, as a large number of companies started manufacturing shoes from ocean plastics. Such as Rens, Roscomar, Rothy's, Timberland, Allbirds, Ocean Refresh, Suavs, Vionic, TropicFeel, and Giesswein. In 2019, Finnish athleisure brand, Rens started making sneakers from recycled plastic and coffee waste. The material features AquaScreen Tech which allows air to pass through without letting water in to keep the shoes free of bacteria and odor with a drying ability 200% quicker than standard sneakers.

The Asia Pacific region dominated the recycled ocean plastics market and accounted for more than 44.3% share of the global revenue in 2021. The region is projected to witness significant growth in the forthcoming years owing to the increasing investment by government and non-profit organizations in the recycling sector.

Asia Pacific region is responsible for over 80% of all global plastic waste emitted to the ocean. This is a result of waste mismanagement, and lack of waste collection and processing in many countries across the region. Recycling makes up a small percentage of waste disposal methods used, while open dumps are the widely used practice in Southeast Asia. 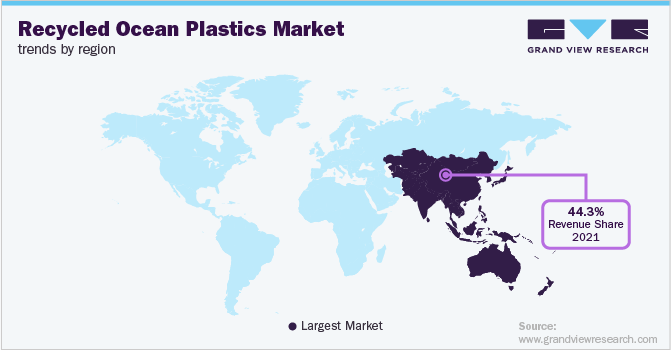 European Commission considers plastic waste management as one of the seven areas to achieve a circular economy by 2050. Besides the European Strategy for Plastics in a Circular Economy, which would phase out the use of microplastics, the Commission is expected to come up with more proposals to address plastic waste, including microplastics.

On March 27, 2019, the European Union adopted rules to regulate lost fishing gear and the ten most widely used single-use plastic Resins in Europe which account for seventy percent of marine litter. These new rules were also approved by the Council in May 2019.

The market for recycled plastics is still in the early stages of development mainly with governments and NGOs involved in recycling ocean plastic. Competition between companies is completely based on the product quality offered and the latest technology & innovation implemented in the production of recycled plastics.

Collaboration and technological development are the major strategies adopted by companies. For example, on May 31, 2021, Adidas partnered with Parley for the Oceans to turn marine plastic into sportswear. It uses recycled plastic bottles as a replacement for virgin polyester. Under these initiatives, they will make 1 million shoes from recycled plastic from the oceans. Some prominent companies in the global recycled ocean plastics market include:

This report forecasts volume revenue growth at global, regional, and country levels and provides an analysis of the latest industry trends in each of the sub-segments from 2019 to 2030. For this study, Grand View Research has segmented the global recycled ocean plastics market report based on resin, dimension, source, application, and region:

What are the factors driving the recycled ocean plastics market?

How big is the recycled ocean plastics market?

What is the recycled ocean plastics market growth?

b. The Asia Pacific dominated the recycled ocean plastics market with a share of 44.4% in 2021. The increasing government spending on the recycling of plastics has been one of the major trends impacting the market in North America.

Who are the key players in the recycled ocean plastics market?

b. Some of the key players operating in the recycled ocean plastics market include Ocean Plastic Technologies, The Ocean Cleanup, Oceanworks, OCEANPLASTIK SRO, Textil Santanderina, Seaqual Initiative, and Waterhaul.